Standoff at Maui jail: ‘Disturbance’ at MCCC resolved after 3 1/2 hours 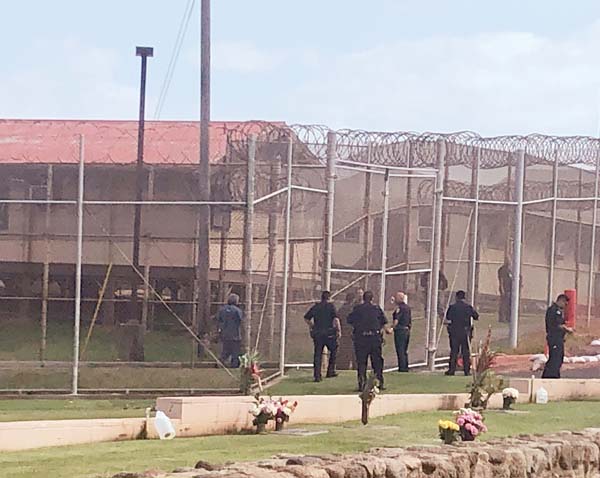 Maui police officers monitor the perimeter of Maui Community Correctional Center at around 3 p.m. Monday afternoon. Police were responding to reports of a “disturbance” and a small fire started by inmates in a module holding pretrial detainees. The Maui News / KEHAULANI CERIZO photo

A “disturbance” in a module housing pretrial detainees at Maui Community Correctional Center on Monday afternoon closed surrounding roads and drew a strong police and fire presence at the Wailuku jail.

The standoff was resolved without major injuries at 6:30 p.m. when correctional staff entered the module “and brought the disturbance under control,” said state Department of Public Safety spokeswoman Toni Schwartz.

At about 3 p.m., police responded to the jail after inmates started a small fire in a module that housed 94 inmates, Schwartz said. Initial reports indicated that inmates had broken the fire sprinklers and had started the blaze.

Waiale Road fronting the jail was completely blocked off for about 15 minutes as police cars and fire and medic units responded. One lane of traffic was opened, but by then there was a major traffic jam in the area.

In an update at 5:45 p.m., Schwartz said that while the situation remained active many of the inmates came out voluntarily but that there still were some holdouts.

At 6:26 p.m., MCCC correctional staff went into the module and brought the disturbance under control, she said. Maui police assisted in ending the standoff.

No staff or inmate injuries were reported, though everyone was being checked out by facility medical staff as a precaution, Schwartz said.

When asked how MCCC will house the nearly 100 inmates in the damaged module, Schwartz said that public safety officials are “currently assessing the damage from this disturbance. Our current priority is ensuring all inmates and staff are safe as the cleanup begins.”

MCCC was put on lockdown from the beginning of the disturbance, which is standard procedure, she said.

Victorino expressed relief Monday night after the disturbance at the jail was resolved.

“I’m very thankful the incident was not more serious,” Victorino said. “Mahalo to our adult correctional officers and Maui police for getting the situation under control very quickly.”

MCCC is considered a jail and not a prison. The facility houses pretrial detainees and inmates with short-term sentences, usually a year of less, and prison inmates nearing release.

Overcrowding has been an issue at the jail, which has a capacity of 301 beds but held 469 (399 men and 70 women) inmates on May 31 — 56 percent above operational capacity, according to the Department of Public Safety report “Pre-Assessment Consultations: Proposed Medium Security Housing Units” released in July.

An American Civil Liberties Union complaint to the U.S. Justice Department in 2017 called MCCC “the most egregiously overcrowded facility” in the state.

Inmates told The Maui News in 2015 that there were four inmates in a 13-by-8-foot cell designed for two with inmates sleeping on mattresses on the floor, sometimes inches away from the toilet. There were nearly 500 inmates in MCCC at the time of the report.

There have been three inmates in a cell since 2000, Public Safety Department officials said then.

The Public Safety Department report discussed plans for a new 80-inmate unit on the grounds of the 7-acre jail.

MCCC also was fined thousands of dollars last year by the state labor department for inoperable doors, dormitory stairways in disrepair and a fire alarm system that has not been operational for years.

* Kehaulani Cerizo, Lila Fujimoto and Colleen Uechi contributed to this report. Lee Imada can be reached at leeimada@mauinews.com.