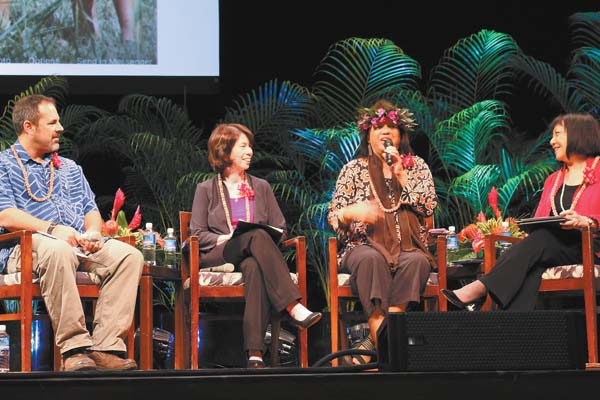 The Hawaii Energy Conference and Exhibition morning panel discussion Thursday focused on operating isolated grids efficiently and resiliently, specifically in remote places such as Molokai, and the challenges that arise.

Presented by the nonprofit Maui Economic Development Board, the two-day event drew expert speakers to the Maui Arts & Cultural Center’s Castle Theater, where hundreds of energy professionals, students and enthusiasts attended multiple talks throughout the day.

With one of the highest average costs and lowest average daily use of electricity, Molokai is one of six isolated island grids in Hawaii.

The island has a population of about 8,000 people with about 4,000 Native Hawaiians, many of whom come from fourth-, fifth- and even seventh-generation families.

Having an identity rooted in Native Hawaiian culture is significant there, and any island changes have big impacts on the small community, according to panelist Iolani Kuoha, Molokai Middle School Hawaiian immersion teacher and STEMworks facilitator, who set the stage for the discussion by describing her island home. She said that although the four-district island is without traffic lights, big-box stores and fast-food restaurants, it is teeming with rich natural resources.

“We tend to learn how to be self-sufficient,” Kuoha said. “We were taught by our kupuna, our elders, how to survive, how to malama, how to care for our land and how to respect the aina, the ocean, and what it provides for you.”

Although the island is considered to be the last Hawaiian island, it also has the highest percentage of foreign ownership in the state, said Molokai resident Karen Holt via presentation video.

“We often don’t have a voice in important decision-making,” she said. “The community has to get a little feisty in order to be heard.”

The uniqueness of the environment, culture and community there requires a different approach for electric officials striving to reach statewide 100 percent renewable energy goals by 2045.

Panelist Mahina Martin, MECO government and community relations manager, said the company has a history of community engagement on Molokai, but within the last few years, the effort has increased. The company held 13 roundtable sessions, three of which were in schools, and gathered 475-plus comments among the island’s four districts.

“We moved forward with a process intended to create trust and respect and ultimately to create meaningful dialogue,” said Martin. “It was an opportunity to lay the foundation for inclusive planning and a great opportunity to demonstrate our willingness to work with the community.”

On the operational end, providing reliable service is an important aim for the company. It services 3,200 customers on Molokai, which is about 5 percent of Maui’s or 1 percent of Oahu’s customers, and the island has eight distribution circuits, according to panelist Mathew McNeff, MECO power supply director.

The annual peak load is between 5 to 6 megawatts and the minimum is about 1.5 MW.

“Historically, we would have seen our minimums at early-morning hours when most people are sleeping,” he said.

However, because the island has an “extremely high penetration of distributed PV — about 3 MW have been installed or have been approved to be installed — the minimum load is in the middle of the day, which poses challenges.

“We’re always looking to partner with different entities to try to mitigate some of the financial impacts to the customers,” McNeff said.

He added that the cost was brought down for customers, thanks to a partnership with Hawaii Natural Energy Institute to install a battery energy storage system as well as a load bank on Molokai.

Also, community-based renewable energy projects give residential customers an option to benefit from a solar installation without having it on their roof or having to fund an entire system. These projects have their own terms separate from the utility, according to Shayna Decker, MECO communications manager.

The Public Utilities Commission approved Molokai’s first large-scale solar-plus-storage project, Moloka’i New Energy Partners, a 2.64-MW project with 3-MW battery storage system, in late July. The Chicago-based Half Moon Ventures company will sell power to MECO and was projected to be in service by the end of the year.

McNeff said electric vehicles are an attractive option for drivers on Molokai, who face about $5 per gallon gas prices. The company installed a fast charger for EVs, held workforce development talks for maintaining the vehicles and donated one to Maui Economic Opportunity on Molokai.

“In working with the Molokai community, we know it’s a constant weaving of what’s internal and what’s external,” Martin said. “It’s almost like a haku lei. . . . it’s done deliberately . . . and it’s also long-lasting, something that we want to be around for a while.

“Underneath is the weaving of it. It’s done not just skillfully but firmly to make sure the lei lasts a very, very long time. To me, that’s how we do business and how we do community engagement in Hawaii Nei.”

Scot Urada is state Department of Transportation project manager for a road-usage-fee pilot project, funded by a federal grant. Speaking at the Paia Community Center on Wednesday, he presented an overview of the project that proposes to swap the 16-cent fuel tax with a road-usage charge. The Maui News / DAKOTA GROSSMAN photo