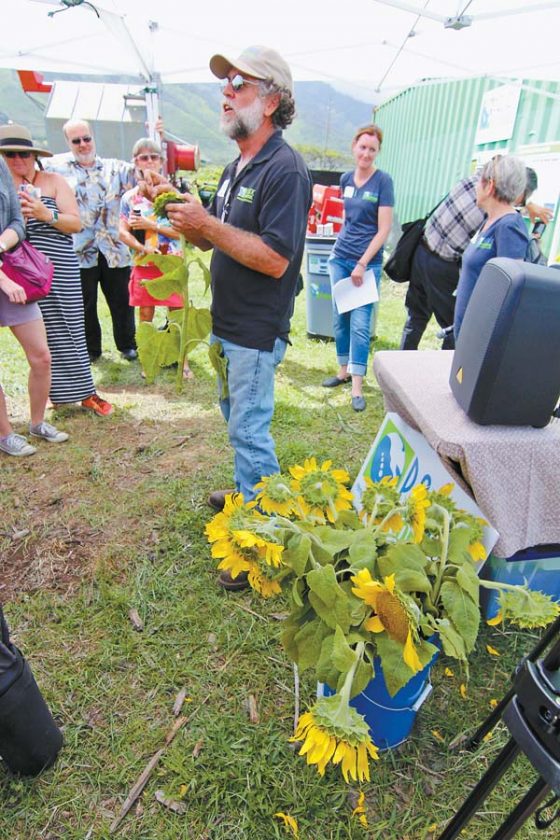 Pacific Biodiesel co-founder and President Bob King speaks to an Earth Day crowd at the company’s sunflower fields last year. Pacific Biodiesel announced today that it has been awarded the first state license for an industrial hemp farm on Maui. The 10-acre facility will be located in Central Maui. The Maui News / COLLEEN UECHI photo

The farm is operating under Imua Energy LLC, which is a personal entity of Pacific Biodiesel Technologies foun-ders Bob and Kelly King, according to a news release.

The commercial farming operation will initially produce full-spectrum industrial hemp extract. It will be manufactured by Imua Energy and distributed by Maiden Hawaii Naturals, a wholly owned subsidiary of Pacific Biodiesel and marketed to cosmetic manufacturers.

“We are so honored to have been granted the first industrial hemp commercial farming license on Maui,” said Bob King, who is also the president of Pacific Biodiesel. “The cultivation of industrial hemp offers a wealth of opportunity for our island, from health and wellness and culinary usage to textile and biofuel production. With this expanded farming operation, we are inspired to continue uncovering new ways to further our commitment to agricultural diversity and renewable energy in Hawaii.”

The 10-acre farming site will also be the first industrial hemp farm in the United States powered by 100 percent biodiesel, according to the news release.