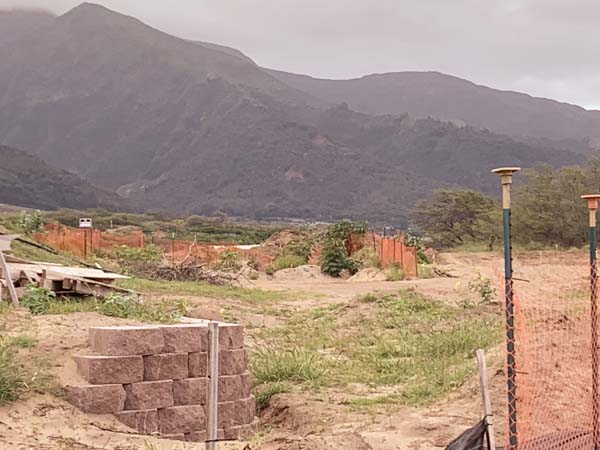 Shown is the worksite for Maui Lani Phase 6 that is the subject of a preliminary injuction ordered by 2nd Circuit Judge Joseph Cardoza. -- Photo courtesy of Jennifer Noelani Ahia

Calling it the culmination of years of hard work by many people, the plaintiff in a complaint over a Maui Lani project’s handling of Native Hawaiian burial sites praised a judge’s issuance of a preliminary injunction that will stop work until more protections are put in place.

Jennifer Noelani Ahia, a cultural descendant to burials found at the site, filed a complaint in February against the state, the county and the Maui Lani landowner, alleging that the project had disturbed about 180 burials. The action temporarily halted construction on Maui Lani Phase 6.

“My name is on the lawsuit as the plaintiff, but this is a group effort representing the lahui who have been advocating to protect burials for years and years,” Ahia of Wailuku said. “This is the culmination of many years of hard work by many kupuna from this area.”

Second Circuit Court Judge Joseph Cardoza on Friday granted the preliminary injunction with both parties to meet Friday to discuss the final terms. State attorney Daniel Morris declined to comment Friday following the oral ruling made by the judge. He said a follow-up hearing will determine exactly what will happen.

Terms of a temporary restraining order will be kept in place until the meeting, when the judge has asked parties to come up with proposals to provide further protections for burials at the project site, said David Kauila Kopper, Native Hawaiian Legal Corp. attorney representing Ahia on Friday.

“The judge recognized the irreparable harm when burials are disturbed or desecrated — you can’t fix that once it happens,” Kopper said. “He also recognized that burials deserve the highest protection under the law.”

“On behalf of HBT of Maui Lani, we are pleased with Judge Cardoza’s ruling, and we look forward to working with the plaintiff to address the issues requested by the court,” Michael Carroll said.

It also said that SHPD did not follow its own historic preservation rules in classifying the burials and hid details of the burials from groups that usually have a say in burial matters, like the Office of Hawaiian Affairs, the Maui Lanai Islands Burial Council and the Native Hawaiian community.

Maui Lani Phase 6 is a single-family residential development of 45.2 acres between The Dunes at Maui Lani golf course and Maui Lani Parkway in Kahului, according to Carroll. The phase is being developed in four parts. The first three are nearly completed; homes have been built and people have moved in, he said.

Ahia’s complaint centers on the fourth portion, which includes rock grading that is 97.5 percent complete and utility installation that is “substantially underway.”

“This is one development in that area, but it’s part of a larger picture where kanaka maoli burials have been disrespected and desecrated going back many, many years,” Ahia said, adding that Cardoza on Friday affirmed the significance of all burials, regardless of headstones or grave markers. “It is an erasure of Hawaiian people in life and in death because our burials haven’t been treated with the same importance or legal protection as those marked in cemeteries.”

The plaintiff said she was “heartened” by the judge’s decision Friday.

“He said it was clear that burials have highest protection under the law and everyone understands how important burials are — no one would want their ancestors disturbed,” she said.