Woman, 81, put on probation in stabbing 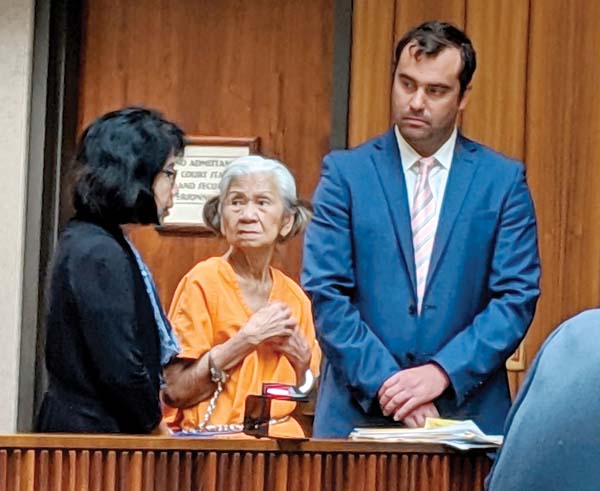 WAILUKU — An 81-year-old woman was placed on four years’ probation Wednesday for stabbing another woman, who suffered “life-changing” injuries from the assault in a Kahului parking lot last year.

Natividad Domingo was given credit for more than eight months she had spent in jail after being arrested July 22.

“You just can’t pull out a knife and stab someone if you’re mad at them,” 2nd Circuit Judge Rhonda Loo told Domingo. “What you did was an overreaction.”

Police said Domingo and a 55-year-old woman were in the parking lot across from the Salvation Army at 45 W. Kamehameha Ave. when the stabbing occurred at 9:47 a.m.

Domingo reportedly asked the other woman to loan her some money. When the woman said she didn’t have any money, Domingo “poked” the victim in the lower right area of her abdomen with a kitchen knife, according to court documents.

The knife, which was found nearby, was described as having a 5-inch blade and a 4-inch plastic handle.

“This is a life-changing assault on Lauralee Basbas,” Tani said Wednesday. “It forced her to move from Maui to Washington to live with her daughter.”

“Before the assault, she was not taking any medication at all,” Tani said, “Now she’s taking 11 types of medication daily. It has a very adverse effect on her life. She was working. Now she’s unable to maintain a job.

“She’s lost her independence. She’s depending on her daughter and son-in-law to help her.”

At Basbas’ request, Tani argued for a 10-year prison term for Domingo.

Deputy Public Defender Zach Raidmae said probation could help Domingo, “who was having a hard life on the streets” when the assault occurred.

He said Domingo didn’t tell police that Basbas had hit her in the chest, raising a self-defense claim had the case gone to trial. Domingo believed that her money had been stolen by Basbas, Raidmae said.

“There’s no indication that there was self-defense,” Tani said. “This was more of an anger issue.

“It was basically an unprovoked assault on Ms. Basbas, and she suffered the consequences.”

He said Domingo’s prior criminal history includes a similar offense in 1997 when Domingo threatened another woman with a knife.

Domingo had pleaded no contest to first-degree assault of Basbas.

When Judge Loo asked Domingo if she remembered stabbing Basbas in her stomach that day, Domingo replied, “Yeah, because she steal my money.”

Motioning to her shoulder area, Domingo said, “I only stab her once here.”

“But you agree you stabbed her with a knife?” Loo asked.

“It doesn’t matter if it was a small knife or a big knife, you still stabbed her,” Loo said.

If she was angry at Basbas, Domingo should have called the police or asked someone for help, Loo said.

“This was very serious, and she could have died,” Loo told Domingo. “Your poking days are behind you.”

She was ordered to have no contact with Basbas and to write a letter apologizing to the victim that would be turned over to her probation officer.