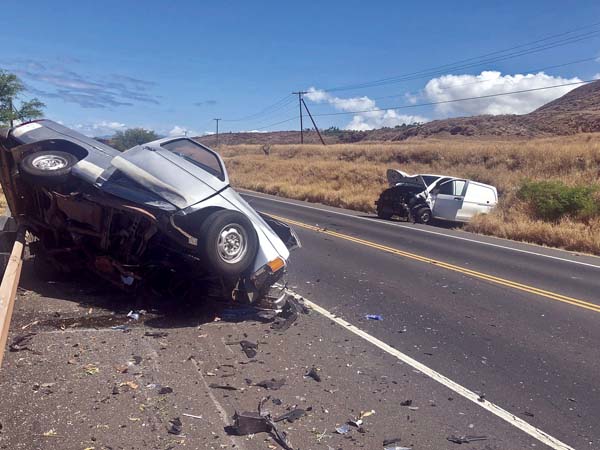 A heavily damaged pickup truck and cargo van sit on the side of Honoapiilani Highway following a fatal accident on Monday morning. The van crossed the center line and collided head-on with the pickup. Maui Police Department photo

A 69-year-old Lahaina man was killed in a head-on collision Monday morning on Honoapiilani Highway just south of the Lahaina bypass, police said.

Jimmy Alvarez Barbosa was traveling south on the highway in a silver 1987 Nissan pickup truck when a northbound white 2017 Mercedes-Benz cargo van crossed left of center and collided head-on into the pickup truck, police said.

The collision occurred at about 9:15 a.m. on the highway 0.2 mile south of the bypass, police said.

Barbosa was pronounced dead at the scene of the crash. 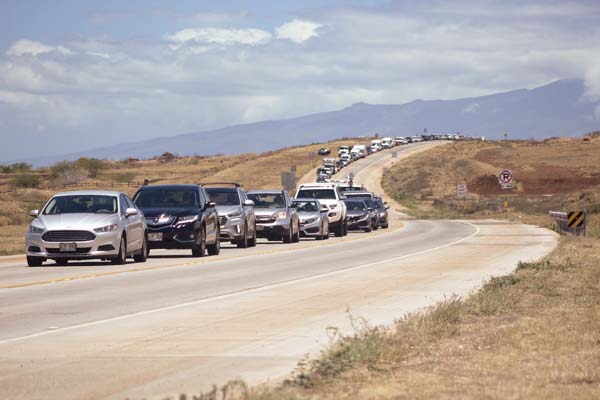 Traffic snakes along the Lahaina bypass Monday afternoon as cars wait for the highway to clear following a fatal accident. The Maui News / COLLEEN UECHI photo

The highway was closed for about three hours while police investigated the crash. Traffic was backed up on both sides as officers redirected cars onto the road past the Olowalu landfill. At around noon Monday, Kahului-bound traffic snaked along the bypass all the way back to Hokiokio Place. Even after the highway reopened at 12:40 p.m., Lahaina-bound traffic was backed up along the pali past the lookout point.

The traffic death was the ninth this year on Maui County roads, compared with three at the same time last year.