Mother of missing hiker: ‘She has to come through this’ 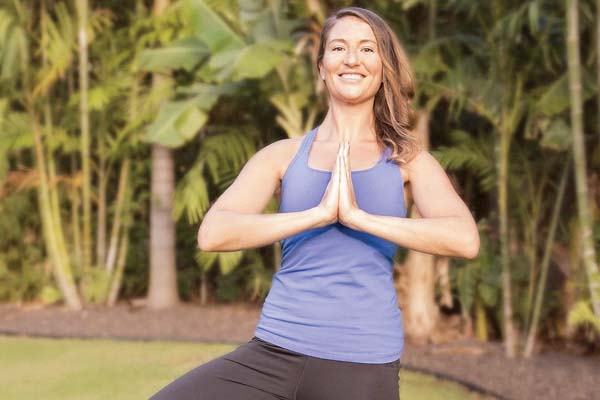 MAKAWAO — If anybody can handle an extended period of time in the dark and cold of the Makawao Forest, it’s Amanda Eller, friends and family of the missing hiker say.

“She is mentally, spiritually and physically incredibly strong,” Eller’s friend and spokeswoman, Sarah Haynes, said Sunday. “She can fast for a very long time. While we would never wish this upon anybody, this might be the person who is the most trained to deal with this situation. So this is why we feel so strongly that she could be in that forest and she could be alive and we need to look way beyond today.”

The 35-year-old Haiku resident and physical therapist was last seen Wednesday morning. Her white Toyota RAV4 was found in the parking lot of the Makawao Forest Reserve, where friends and family say she loved to run and hike. Officials found her cellphone and wallet inside the car, and her key hidden under the driver’s side front tire. A massive interagency search began Thursday morning; by Sunday police and fire had suspended their search but said they would actively pursue any leads.

Volunteers continued the search for Eller on Monday, joined by Eller’s parents, sister and best friend, who flew in from overseas and the East Coast.

The discovery of a Mother’s Day package that Eller had mailed to her family spurred new questions and adjusted the timeline of when she may have been in the forest. The pet-sitter at the Eller family’s North Carolina home found the package, which contained “beautiful items and a lovely letter, which included Amanda’s love for her family and excitement about her future,” according to an update posted Monday on the Findamanda Facebook page. 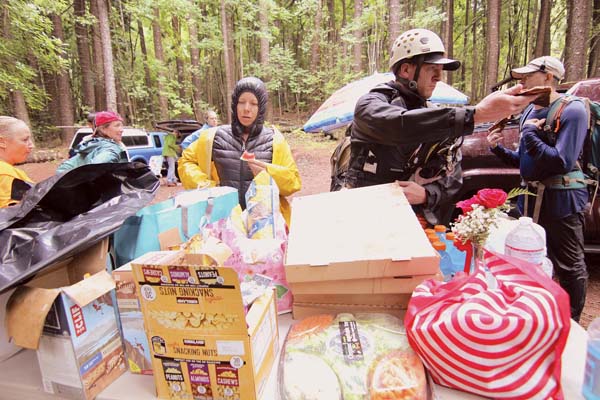 Volunteer Collin Manor (far right) of Maui Search and Rescue hands a slice of pizza to fellow rappellers after a day of searching gulches in the Makawao Forest Reserve on Sunday. As fire and police suspended official search efforts, community members continued with a grid search of off-trail areas Monday. The Maui News / COLLEEN UECHI photo

“What is most important about this package is that it was mailed the morning of Wednesday, May 8th — the day she disappeared,” the post stated. “The package had a print-at-home label but it was dropped to the Haiku post office, and scanned at the receiving counter at 10:19 a.m. This changes our timelines. We’ve always believed her car arrived the forest between 8 a.m. and 1 p.m. In light of this new evidence, her car likely arrived after 11 a.m.”

The Facebook post also said that the people who thought they had seen Eller on the trails earlier in the morning were contacted by a woman “who looks a lot like Amanda” and was hiking in the same area. It may have been her, not Eller, who stopped to pet a puppy and chat with other hikers. Eller is described as 5 feet, 9 inches and 145 pounds, with long brown hair and an athletic build.

The post added that footage was found of her car leaving the post office area at 10:21 a.m., and that search organizers are looking for footage to find out if she turned left or right toward the forest.

Police were unable to comment on the development Monday evening.

“I’m extremely proud of her,” Julia Eller said. “It was a huge amount of dedication to do all that and be successful in your practice.”

Amanda Eller had been working in Maryland when she started looking for a change of scenery.

“Basically, she hated winter,” Julia Eller said. “Amanda was the sweater, bundle-up queen up there because it really gets cold.”

She moved to Florida, where she spent three years, before moving to Maui about four years ago to work as a temp for Kaiser Permanente. She fell in love with Maui and eventually accepted a full-time job with Kaiser, where she worked for about a year and a half before dropping down to part-time and starting up yoga teacher training. She also worked on an organic farm, said Julia Eller, who recalled that she was “stunned the first time I saw her holding up a chicken.”

Amanda Eller went on to open her own physical therapy office in Wailuku and created a class for Afterglow Yoga called “physioflow,” which took advantage of her professional training.

“She was teaching people how to work with their body in this class,” Julia Eller said. “Her goal was always not to have people . . . come to her to fix them, but to teach them how to fix themselves. Amanda’s a very service-oriented person.”

Amanda Eller’s philosophy was always to be “as pure as possible in the things she puts into her body,” and not only did she help her clients, but she inspired her mother as well to get in shape and make healthier choices. Julia Eller said she could always call her daughter, “and she would be honest with me, but at the same time she also didn’t beat me up for things.” She introduced her mom to inspirational books that helped her learn to “rise above the fear” and stay positive, lessons that are proving timely in her disappearance.

“It’s been a nightmare, and again, I have to stop letting myself go there. I have to be positive, but it’s hard not to get caught up in the emotion,” said Julia Eller as she held back tears.

Like Haynes, she held out hope that her daughter’s physical and mental strength would get her through.

“I can’t imagine my future without her,” Julia Eller said. “I really can’t. She has to come through this. And if anybody can, I think she can, because she is very strong.”

Volunteers are continuing to search the forest reserve from 7:30 a.m. to 6 p.m. each day. The search base camp is located at the hunters’ gate, though volunteers are asked to park at the upper lots. Volunteers should bring appropriate hiking clothing, small backpacks to carry supplies like water, fully charged cell phones, and flashlights. All volunteers must sign in and sign out at the start and end of their search.

Anyone with information should call Maui Crime Stoppers at 242-6966. The family is offering a $10,000 reward for any information that may lead to Amanda Eller’s safe return. A fundraising page has also been started at gofundme.com/find-amanda.