Powerboat capsizes in waters off Makena 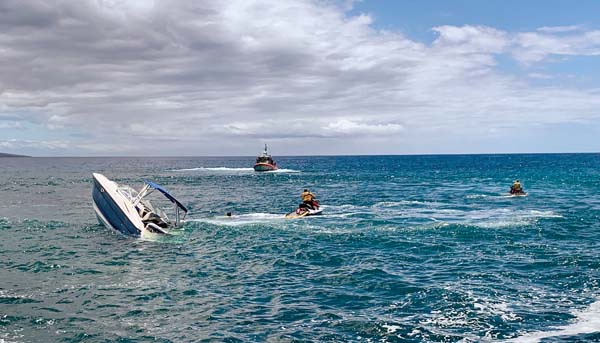 Four people were transported to shore when a 30-foot recreational powerboat started taking on water and capsized about 200 yards offshore in Makena on Monday, Coast Guard and fire officials said.

Three other occupants of the vessel Manta Ray swam to shore.

A Wailea fire ladder company, ocean safety officers on rescue watercraft from Kamaole and Makena beaches and the Coast Guard responded to a 12:51 p.m. call after the captain reported the boat was taking on water while off 4450 Makena Road.

No injuries were reported to the two adults and five juveniles aboard, according to the Fire Department.

The boat owner, a Kihei resident, was planning to take visiting friends snorkeling when the boat began taking on water, the Fire Department reported.

The Coast Guard said a maximum of 10 gallons of gasoline was aboard the boat, and responders were assessing the area where the vessel capsized. A slight sheen was reported but was expected to dissipate naturally, according to the Coast Guard.

The agency issued an urgent marine information broadcast to mariners that the vessel remained partially submerged and may be a hazard to navigation.

The Coast Guard said the owner was working with his insurance company to contract salvage of the vessel.

Winds were 5 mph in 3-foot seas at the time, according to the Coast Guard.