Staffers carry dogs Saturday. The animals were being returned to the Puunene shelter after spending two nights at the school due to Thursday’s fire evacuation. The Maui News / MATTHEW THAYER photo

Freddie, the resident tortoise, was the talk of the town on Maui Humane Society social media as many inquired how he was doing during the fire. MHS photo 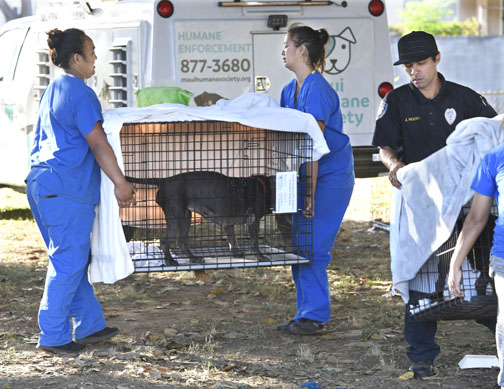 Staffers carry dogs Saturday. The animals were being returned to the Puunene shelter after spending two nights at the school due to Thursday’s fire evacuation. The Maui News / MATTHEW THAYER photo

Millie, a gray mixed-breed pit, enjoyed what she considered to be a big slumber party in Kahului after wildfire evacuations were ordered for the Maui Humane Society in Puunene.

“She loved it,” said Nancy Willis, MHS director of development and community outreach. “We have pictures of her hanging out, getting so much attention, with this big smile.”

Freddie the tortoise, who’s used to roaming free in his own space, wasn’t as happy about the group living arrangements, though.

“Freddie our tortoise was probably the most upset about it,” Willis said on Saturday. “He is used to having the freedom to run around.”

After two nights of sleeping outdoors near the Maui High School gymnasium, scores of animals returned home to Maui Humane Society early Saturday morning in time for a regular opening hour at 11 a.m. It was the largest animal evacuation from the site in recent memory, the director said. 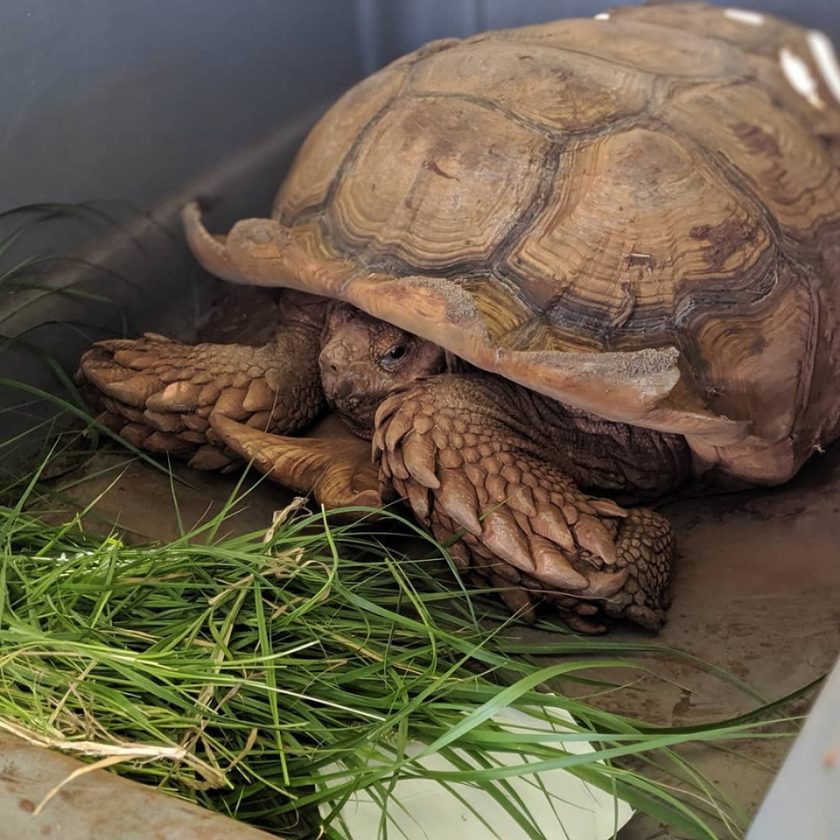 Freddie, the resident tortoise, was the talk of the town on Maui Humane Society social media as many inquired how he was doing during the fire. MHS photo

More than 200 animals, including rabbits, guinea pigs, dogs, cats, two turtles and one very independent resident tortoise were evacuated within 45 minutes after getting official fire warnings.

What started out as a late-morning Waikapu brush fire Thursday quickly swept south toward Kihei, fed by wind gusts and dry brush. By midafternoon, it had covered thousands of acres and forced evacuations for the animal shelter, along with Maalaea and north Kihei residents.

As soon as Willis sent out the call for help in evacuating the animals, she said “it was amazing how many people showed up.”

Crates and other carriers, along with loads of volunteers and staff, transported the animals to safety at Maui High School. They decided to set up camp outdoors under trees near the gymnasium because it was cooler. Soon, about 157 went out to homes through the MHS foster network, including rabbits and guinea pigs. Kittens, dogs and cats were also fostered.

During the big slumber party, Willis said, Millie the dog spent lots of time lying on her back, taking pictures with staff and getting attention. Freddie the tortoise went for a walk with a leash on Friday. All the animals got love during their stay, she added. 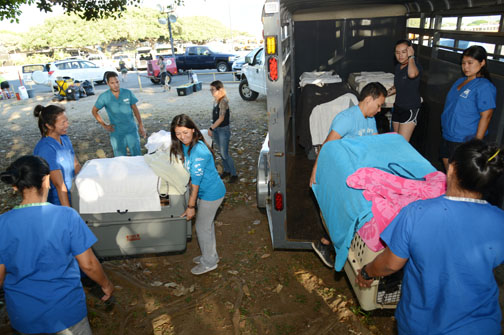 Volunteers, staff and donations continued to show up as the time went on. Costco donated, Subway offered free food, even a shaved ice truck came by. Cots were provided by the County of Maui for volunteers and staff staying overnight. Also, the Maui High staff “was unbelievable,” Willis said.

“They took such good care of us. They kept checking on us. Even this morning the guys took trash and hauled it away.”

Once the shelter got the all-clear to return to Puunene on Saturday morning, about 75 animals needed transport. Foster families will bring back remaining animals in coming days or weeks. Willis said she hopes some decide to keep the foster animals for good.

Staff members returning to the Maui Humane Society saw just how close the fire came to their property.

“It came incredibly close . . . up to our storage containers,” she said. “The firefighters saved Maui Humane Society — I have no doubt in my mind.

The director said that her biggest takeaway from the evacuation ordeal is how connected the Maui community can be in times of crisis.

“Our staff, volunteers and community are amazing,” she said. “We had a plan in place, but we couldn’t have done it without everybody. Everybody played a role. No matter how small of a role people think, even if it was bringing us sandwiches. It all played a part that equaled the success we had.”

One of the first things that happened when the animals returned to the shelter was that Freddie the tortoise said goodbye to fellow campers.