The Party is over in Makawao 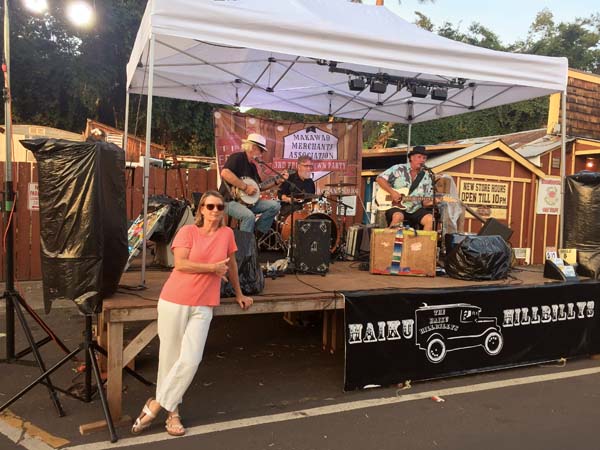 One of the Makawao Third Friday organizers, Panna Cappelli, stands next to a stage at the event as the Haiku Hillbillys perform. August will be the last Makawao party as Cappelli, and her husband, Giovanni Steven Cappelli, end their voluntary term as lead organizers. Photo courtesy of Makawao Merchants Association

The Makawao Third Friday party in August appears to be the last for the town — at least for now — as longtime organizers are ready to pass the torch after eight years but have found no takers.

“If anyone is interested, we will certainly help in the transition,” said Giovanni Steven Cappelli, owner of Casanova Italian Restaurant and Deli, who with his wife Panna, owner of Maui Hands Gallery, have been the event’s anchors since its inception eight years ago.

The event, held on the third Friday of every month, usually shuts down Baldwin Avenue in Makawao town and features food and craft vendors; entertainment, including Hawaiian music; and activities for children, including magicians and face painting.

Cappelli said there was strong interest by merchants the first year, but that dwindled, leaving him and his wife, along with one volunteer and a hired coordinator to run the show.

Cappelli, president of the Makawao Merchants Association, which was formed to handle the parties, said that as years went by, only about half of the merchants stayed open during the Friday events. He said small merchants struggled to have staff remain later, as stores normally would be closed during the party hours from 6 to 9 p.m.

Cappelli made a second attempt at a Makawao Merchants Association meeting last week to get someone else to volunteer, but no one was interested.

The party is one of five monthly bashes in Maui County. Wailuku has “First Friday,” Lahaina, “Second Friday,” and Kihei “Fourth Friday.” There is also a “Fifth Friday” party on Lanai. They are all sponsored by the Maui County Office of Economic Development.

But she said if no one can be found to run the event, then it may be opened to another town.

“(But) I certainly want to work with Makawao first,” she said.

The Economic Development office is speaking with those who may be interested in running the event.

The county has about $45,000 in its budget for the Makawao event over the upcoming contract year, which will begin in September, Fukumoto said.

For now, the party will be missed.

“It’s something we are sad to have go,” the Rev. Kerry Kiyohara of nearby Makawao Hon-gwanji Mission said. “I think it’s a big loss for the community.”

He said members of his congregation go to the event along with the church’s neighbors, who take their children.

Kiyohara said the mission also benefited, as it would offer its grounds for parking with a $5 donation. Depending on the featured entertainer, from 20 to 120 cars would park there.

It did take some effort to staff the parking, with volunteers directing traffic and waiting for stragglers to pick up their cars after 9 p.m., he said. But the mission made it into a fellowship event and had potluck among volunteers. The public who parked at the mission also got to visit and learn about the building they’ve only seen from the roadway.

Even tourists would attend; some told congregants their concierges recommended the event, Kiyohara said.

Kiyohara is willing to serve as treasurer for the merchants if someone else does the lead job. He explained it wouldn’t go over well if a minister was leading a merchants’ organization.

Jennie Spenser, owner of Collections, a longtime boutique in Makawao town, said the store sometimes saw an increase in business on Third Fridays.

But she said that for her small boutique, it was hard for staff to work until 8 to 9 p.m.

Cappelli said that there may not have been an immense economic boost, but “this event brings in the general awareness of Makawao as a destination for the visitor.”

Tourists would come to Third Friday and return to tour the town. It gave locals a place every month to say hello, Cappelli added.

As for whether the event brought more customers to Casanova, he said “it depends on the number of food trucks (or if it) rains.”

But Cappelli said the value was having Makawao be one of four select towns on Maui to have a party.

Fukumoto said that those who are interested in volunteering should leave their information with the Makawao History Museum at 572-2482 or at info@makawaomuseum.org.

* Melissa Tanji can be reached at mtanji@maui news.com.