[VIDEO] Safeway sells out, shuts down ahead of new Kahului location 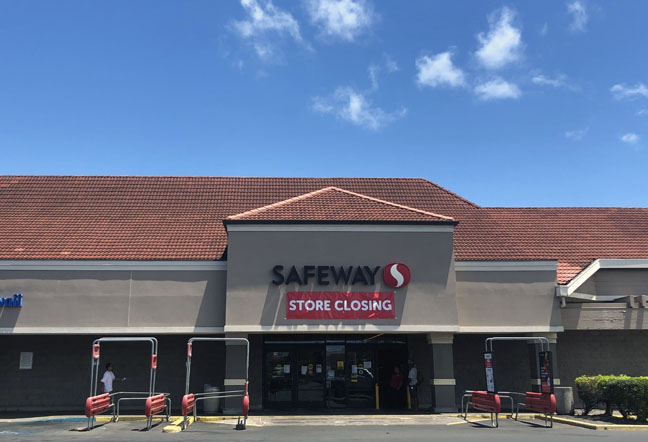 Safeway at 170 E. Kamehameha Ave. closed Friday night due to selling out of inventory, staff said Saturday. The bank and pharmacy will remain open through Tuesday. The Maui News / KEHAULANI CERIZO photo

KAHULUI — Shoppers seeking last-minute sales Saturday amid Safeway’s closure in Kahului were turned away, with staff saying inventory had sold out by Friday night.

Empty shelves, blocked aisles and cardboard boxes filled the 170 E. Kamehameha Ave. location next to Ross on Saturday afternoon. Only the store’s pharmacy and Bank of Hawaii will remain open through Tuesday.

Meanwhile, the new Safeway at 1090 Hookele St., also in Kahului, that’s slated to open Wednesday was chock full of stuff. Vendors were dropping off crates of fresh products on Saturday afternoon for the anchor tenant at Ho’okele Shopping Center, owned by Alexander & Baldwin. Ho’okele signage was under construction and the lot was scurrying with workers readying for the grand opening.

“Safeway will offer value and convenience to customers at Ho’okele Shopping Center and we are excited to welcome them as our anchor tenant for this project,” A&B spokesman Darren Pai said.

Ho’okele’s 57,400-square-foot Safeway will house Starbucks, pharmacy services and Bank of Hawaii, according to its website. Also, Coinstar, Redbox, Western Union, food bars and Wi-Fi will be included. A Safeway Fuel Station is adjacent to the anchor store. 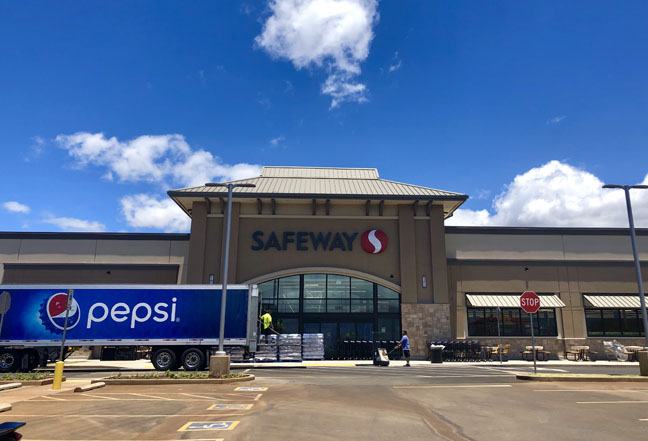 Safeway at 1090 Hookele St., Kahului, is slated to open Wednesday. On Saturday, vendors were bringing new products to the store. The Maui News / KEHAULANI CERIZO photo

Staffers at the Kamehameha Avenue Safeway will be kept on at the new location, and additional workers have been added, according to a Safeway worker, who spoke on condition of anonymity because local staff members were not authorized to speak with media.

Ho’okele, the newest shopping center in Kahului, is located at the intersection of Hookele Street and Hana Highway, near Servco Subaru Maui, MVW of Maui, Lowe’s and Target. The center includes space for additional retailers and a drive-thru restaurant, A&B said on its website.

A&B spokesman Darren Pai did not disclose other Ho’okele retailers but said the company is in talks with others.

“We are in active discussions with other potential tenants and look forward to making additional announcements regarding the future of the center,” he said.

“We’re excited for the grand opening of the new Kahului Safeway store on (Wednesday),” she said via email, adding that details will be coming.

Other Safeway locations on Maui include Wailuku, Lahaina and Kihei. A division of Albertsons Cos., Safeway Northern California operates more than 280 stores across in Northern California, Nevada and Hawaii, according to Supermarket News.