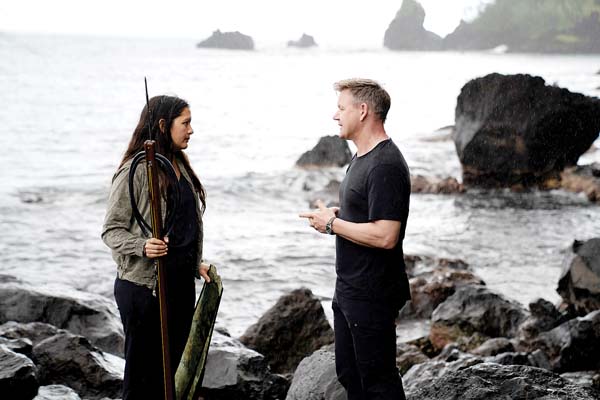 When Maui born and raised spearfishing champion and free diver Kimi Werner took celebrity chef Gordon Ramsay out fishing around Kaupo, she didn’t want the trip to be about a “trophy fish” or “about the ego.”

She wanted the trip to be about learning “how to feed ourselves” and respecting the environment, said the 1998 Maui High School graduate, who now lives on Oahu.

“He was an excellent student. . . . He was totally humble and such a good learner. . . . He just listened,” said Werner, who gave Ramsay the lesson about island life in February for an episode of National Geographic’s series, “Gordon Ramsay: Uncharted.”

“One thing I explained to him, with spearfishing, it’s all about respecting the environment where food comes from and protecting the natural environment that we are in and (that) you are taking a life. I think he has already a deep respect for that,” Werner said Wednesday. 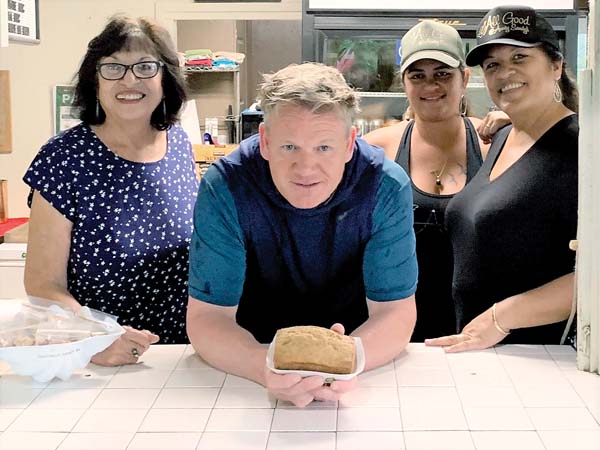 Ramsay, the multi-Michelin-star chef and Ironman athlete, travels to places, such as Maui, Peru, Laos and Morocco, to meet with local people to learn about their culture, dishes and unique flavors.

Each episode concludes with Ramsay putting his new found skills to the test with a legendary local food chef by his side. Together, they whip up a feast for the locals.

In this Sunday’s episode, titled “Hawaii’s Hana Coast,” Ramsay cooks with Maui-based chef Sheldon Simeon, owner of Tin Roof in Kahului and Lineage in Wailea and a “Top Chef” on the Bravo TV series.

As part of the show, Ramsay meets and interacts with people in Hana and the rest of the island. This includes taro farmer Wade Latham, divers Aina Lee and Allen Ting, hunter Robin Kean, president of Ono Organic Farms Charles “Chuck” Boerner, the women of Aunty Sandy’s Banana Bread on the road to Hana and others, according to officials at National Geographic.

Tammy Luat-Hueu, daughter of “Aunty Sandy” Hueu, said she and her mother, co-owners of the stand, had fun with Ramsay, who even baked some of the famous banana bread with them.

“They came on Friday to ask us. They showed up next day, Saturday, with him,” Luat-Hueu recalled, noting the little advance notice.

At first, Luat-Hueu was apprehensive to have the sometimes hot-headed star chef known for swearing at their Keanae stand. All she thought of was: “Oh my God, he’s going to be swearing a lot.”

She also thought he would criticize the stand for being a mess.

Luat-Hueu warned producers that her mother, Aunty Sandy, would not stand for cussing. To their surprise, Ramsay was “so nice and kind,” she said.

Luat-Hueu even asked him: “Dude, why do you lose your mind and swear?”

Ramsay replied that it was all about the television personality.

Ramsay did let out one cuss word — after taking a bite into the warm banana bread. He called the bread “fu—-g delicious.”

Also in Sunday’s episode, Werner and Ramsay will be shown eating raw enenue, a sea chub or rudderfish, caught by Werner. As she fillets the fish on the boat, she explains that enenue caught around the island tastes differently because of the differing seaweed the fish are eating in each location.

She wanted Ramsay to experience the diversity of sea life and that people don’t have to just eat the most popular fish, such as ahi or ono.

At around that time in her life, Werner found herself pulled back to the days of diving and fishing with her father, Chris Werner, who began teaching her when she was 5 years old. At the time, the family was poor and caught fish for their meals.

But life improved for the family. Her father’s business took off and her mother, June, became a nurse. They moved from Haiku to the suburbs of Makawao. The days of diving and fishing were gone, at least for the time being.

Werner, now 39, took up diving and fishing again in adulthood, recalling lessons from her father and other fishing mentors.

And she was able to impart some of that knowledge to Gordon Ramsay for the TV world to see Sunday.

** This story includes a correction from original published Aug. 8, 2019.

• MRA. Two hearings are scheduled this week on a proposed six-story, 156-room Hotel Wailuku, near the corner of ...

The Alexander & Baldwin Sugar Museum, which has been closed due to COVID-19 emergency orders, will reopen ...

The lower parking lot and roundabout at Ulua Beach in Wailea will be closed Wednesday for a day to replace and ...

A group of about 200 peaceful protesters gathered at the intersection of Hana and Haleakala Highways on Saturday ...

THE FOLLOWING SENTENCES for driving under the influence of intoxicating liquor occurred on May 27. The listings ...