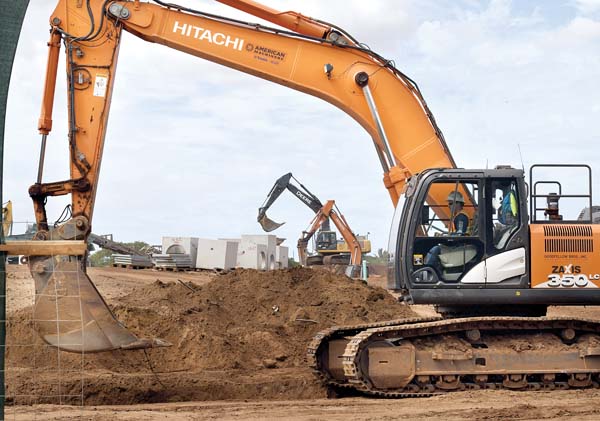 Vertical construction on the first phase of the $400 million Maui Bay Villas by Hilton Grand Vacations timeshare project is expected to begin soon, Hilton officials said Thursday. The first phase will include 132 timeshare units, a clubhouse, support buildings and a beach club. This photo was taken Thursday. -- The Maui News / MATTHEW THAYER photo

KIHEI — A beach renourishment project and the discovery of bone fragments and natural springs on and around the old Maui Lu property are some of the concerns Native Hawaiians and community members are raising about the Hilton Grand Vacations timeshare project on the old resort site in Kihei.

Kalanikau doesn’t want the project to impact the environment, and the community is willing to work with developers to mitigate problems.

“Hilton get one opportunity to improve the Maui people’s mindset,” he said, during a meeting Thursday afternoon with Hilton officials, members of the council and invited community members.

The meeting was held at the Humpback Whale National Marine Sanctuary in Kihei, adjacent to the project along South Kihei Road. More follow-up meetings were called for.

Vertical construction on phase 1 of the 388-unit timeshare Maui Bay Villas project will begin soon, said Tyler Middleton, development project manager for Hilton Grand Vacations. The first phase will include 132 timeshare units, a clubhouse, support buildings and a beach club on the makai side of South Kihei Road.

Goodfellow Bros. has been conducting pre-site work, and the vertical construction contract has been awarded to Hawaiian Dredging Construction Co., Middleton said at the meeting.

First guests are set to have “heads on beds” around June 2021, he said following the meeting.

In all, the project is planned in three construction phases. When completed, there will be 12 three-story buildings on the 27.3-acre site bordered by South Kihei Road and Kaonoulu Street. A clubhouse, pools, water features, beach club and 520 parking stalls are included in the project.

South Kihei Road fronting the project will be widened with a median and crosswalks with flashing lights.

In December, developer Kupono Partners, which is owned by Hilton, received a seven-year, 11-month time extension for the project, which has changed hands and undergone major design changes over the past few years.

Stephen Jacobson, vice president of architecture and construction for Hilton Grand Vacations, said at the meeting that he cannot speak to what happened in the past with the project, but Hilton will have a truthful dialogue with the community.

“There is not an attempt to take advantage” of anyone, he said.

Jacobson said he will not commit to anything that he cannot do and reminded those in attendance that he does not make all of the decisions. He added that the company will be part of ongoing discussions.

“I would like to think in the end, we will be a welcome addition,” Jacobson said at the meeting.

But based on the reception at the meeting, there is a lot of work to do with Kalanikau citing multiple areas of concern.

Hilton is working on a small beach renourishment project on the shoreline fronting areas of the property on the makai side of South Kihei Road. This includes Kalepolepo Beach Park and the beach in the area with the Capt. George Vancouver monument, across the road from the old Maui Lu property. The monument is slated to be relocated nearby.

Kalanikau and others said that those shorelines and beaches already are disturbed by development and that replacing sand in eroded areas will not entirely fix the problem.

Still, something needs to be done about sand blowing onto South Kihei Road near the Humpback Whale National Marine Sanctuary and a huge mound of sand has built up in the area.

Middleton said there is no official start date for the renourishment project.

Another concern that is being addressed is bone fragments found along the property’s fence line last month, Kalanikau said. He said they are old human bones.

Another concern raised is springs that run on and around the property. Jacobson said Hilton will not increase the draw from the well already on the property. The water will be used for irrigation.

Kalanikau explained Friday that the springs are critical to wildlife in the beachfront. He said that water along the shoreline near the old Maui Lu is cold because of the springs. When the old resort was in business, there still was fish and limu in the area.

“If they stick to that ordered use from the previous owner, we should be OK,” Kalanikau said.