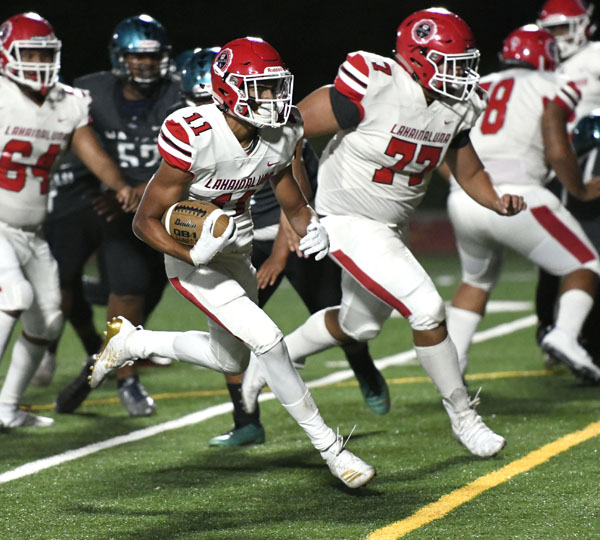 PUKALANI — It was a typical Lahainaluna High School football victory, with the exception of just one hiccup early in the second half.

The Lunas rolled to a 46-12 win over King Kekaulike in the Maui Interscholastic League opener for each team on Saturday night at King Kekaulike Stadium.

It was the Lunas’ 18th league win in a row, dating back to the final game of the 2016 season. Na Alii have not won an MIL game since Sept. 5, 2014, but they caught the eye of Lahainaluna co-head coach Dean Rickard.

“All credit to them, they came out, they balled, they fought to the end,” Rickard said. “Just again, a testament to their kids. They have a never-quit attitude and they showed it tonight.”

One Na Alii player who impressed Rickard was Trey Hunter, who did a little bit of everything in his return from an injury in a win over McKinley on Aug. 3. 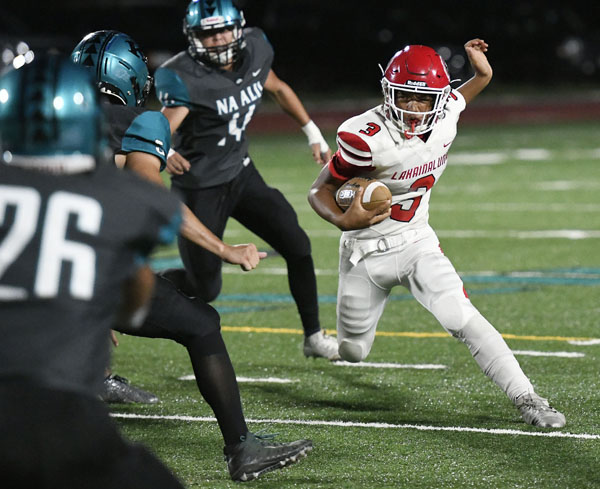 Hunter ran nine times for 54 yards, was 3-for-10 passing for 7 yards, caught a 23-yard touchdown pass amongst his three receptions, played stellar defense at safety and punted five times for an average of 46.4 yards, including a 75-yard boomer.

“That Trey Hunter kid, unbelievable,” Rickard said. “We knew going in that we’d have to key on him. I don’t think he came out a single down. He’s one hell of a player and he showed it tonight.”

Na Alii pulled within 32-12 to open the second half when Kimo DeRego rumbled in from 7 yards out after a King Kekaulike fumble recovery on the Lunas’ 14-yard line one play earlier.

Na Alii had a chance to get closer moments later on a fumble recovery by Logan Kaina at the Lunas’ 12, but they were stopped on downs.

Lahainaluna upped the lead to 39-12 on Joshua Tihada’s 26-yard run, his third touchdown of the night — Tihada finished with a career-high 210 yards on 25 carries. 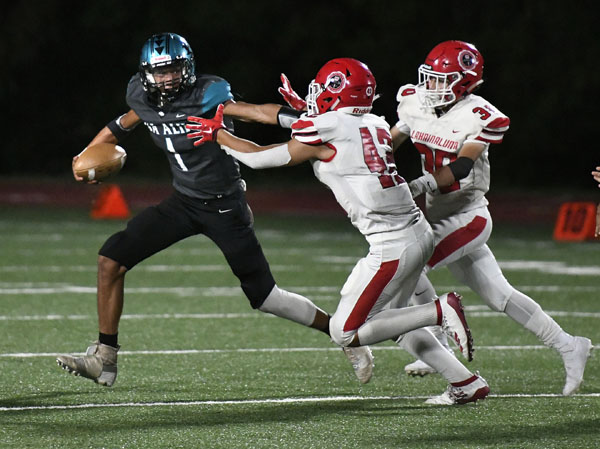 “I think he would agree that without his offensive line and everybody else help paving the way that wouldn’t have been possible, no doubt,” Rickard said of Tihada’s big night. “You talk about good vision, he has great vision. He can stop and pick it up again. We’re just glad that he had a good night.”

Lahainaluna added the final touchdown on a 4-yard run by Derek Perez with 6:00 to play. Perez, who was returning from a personal leave from the team, finished with 15 yards on four carries.

The Lunas finished the game strong, something they lacked in a preseason loss to Damien and a win last week over Kapaa.

“The previous two games, that was something coming that we wanted to work on, conditioning-wise and making sure we keep up that intensity level,” Rickard said. “You know, we were getting worried — the third quarter we came out sluggish, but we’re fairly pleased with the way the kids picked it back up again.

“We were able to sustain some drives and that’s what we ask offensively, that we have some ball control and keep King K off the field. I think we got that done fairly well. We still have a lot of things that we have to work on though.” 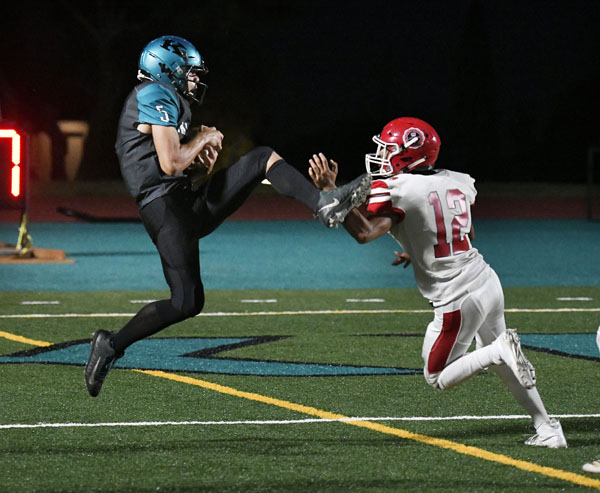 The Lunas rolled to a 32-6 lead at halftime behind a pair of touchdowns from Tihada and two more by Tre Rickard.

Tihada capped a two-play, 16-yard drive with a 1-yard scoring dive on the Lunas’ first possession that started with a fumble recovery by Tysyn Estrella on a sack of Franco Melgar Martich.

The King Kekaulike quarterback was banged up in the first half and did not return, but Na Alii coach Tyson Valle said after the game he expects Melgar Martich to be ready next week.

Valle was encouraged by his team’s effort against the three-time defending Division II state champions.

“Lahainaluna is a tough team, those guys are very disciplined, they run the ball hard, they still have a lot of athletes left, so yeah, it’s a tough team,” Valle said. “I think we’ve definitely got something promising back there.”

Na Alii tied the game 6-6 on a 23-yard pass froim Kainalu Pahia to Hunter that culminated an eight-play, 68-yard drive. During the series, Hunter ran 20 yards for a first down out of punt formation on fourth-and-5 to move the ball to the Lunas’ 43.

The Lunas scored the next four touchdowns.

Brysen Rickard scored on a 10-yard run to cap a 49-yard, five-play drive that began with a 31-yard kickoff return by Kai Bookland.

Lahainaluna needed just three plays to go 43 yards on the next possession, taking a 26-6 lead on a 19-yard touchdown pass from Esekielu Storer to Tre Rickard.

Tihada scored on another 1-yard plunge with 2:20 left in the half to make it 32-6 at the break. The two-play drive started at the King Kekaulike 3-yard line after a fumble recovery.