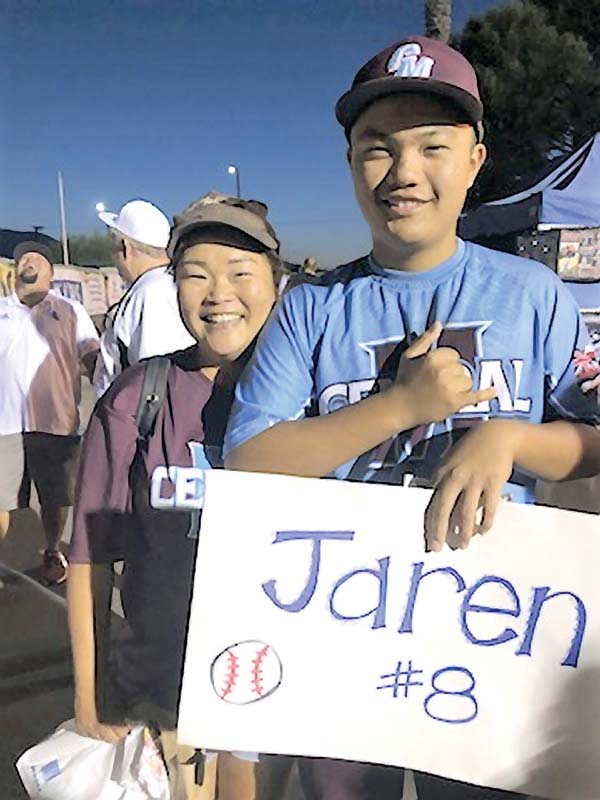 “Hit one for daddy,” whispered Lynn Pascual as she watched from the stands while her 12-year-old son, Jaren, took his at-bat at the Little League West Regional championship game in San Bernardino, Calif., on Saturday.

He did. Jaren smashed a three-run home run, the first home run for the team in the regional, to give Central East Maui a 3-1 lead.

A “shocked” Lynn pointed up to the heavens. Her husband, Anthony “Tony” Pascual, an avid baseball fan, died in January.

The home run led Central East Maui to a 4-1 victory over Arizona’s Sunnyside Little League and a trip the Little League World Series in Williamsport, Pa. It was the first time a team from Maui advanced to the World Series for 11-12-year-olds, the premier youth baseball tournament that receives national and international coverage. 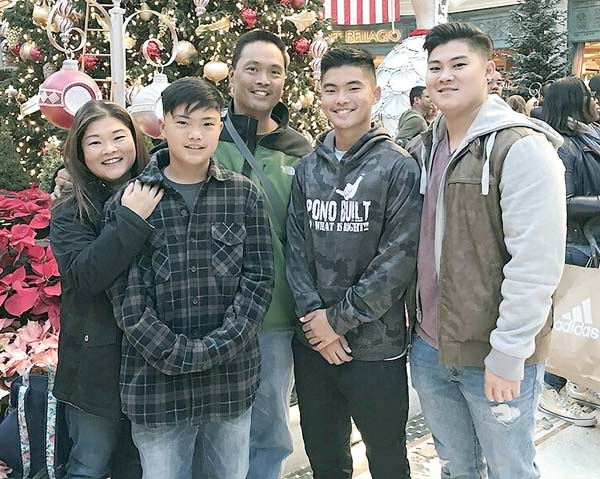 Lynn Pascual (from left) stands next to her youngest son, Jaren, who is playing in the Little League World Series today. Next to Jaren is his father, the late Anthony “Tony” Pascual, along with brothers Zach Pascual and Cade Echevary.

Central East Maui debuts at 10 a.m. today against River Ridge, La. The game will be televised on ESPN Channels 222 and 1222.

The late Tony Pascual is not only a guardian angel for Jaren, but for his older son, Zach, 15, as well. Zach’s Central East Maui All-Stars captured the Little League’s Senior League World Series on Aug. 3 in Easley, S.C.

Lynn was in the stands in South Carolina, when Central East Maui clobbered Willemstad, Curacao, 11-0, for the world championship. The joy of victory was bittersweet without Tony, a longtime pharmacist with Longs Drugs, who died Jan. 13, after a five-year bout with cancer.

It’s been difficult. Lynn says Tony isn’t around to consult about family decisions and what to do with the boys.

“I think that’s the hardest part. I sometimes don’t know if my decisions are the right decisions,” said Lynn, who has another son, 21-year-old Cade Echevary. 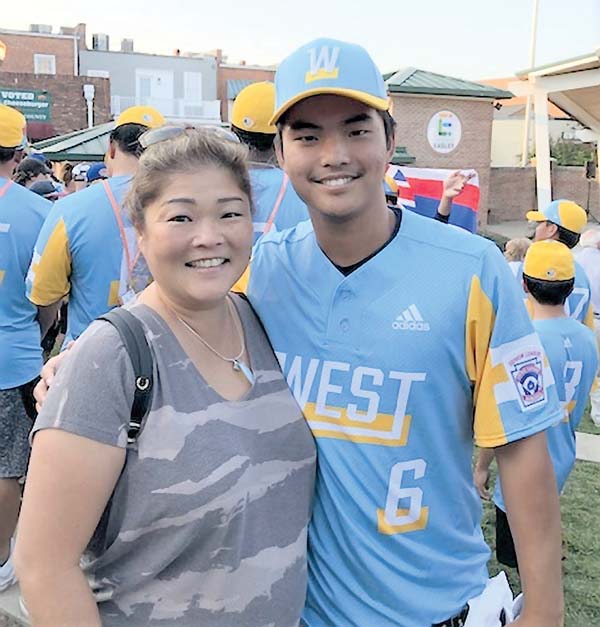 Echevary was part of the 2014 Central East Maui All Stars Senior League Hawaii championship team, which captured the U.S. West Regional title. The team played in the Senior League World Series in Bangor, Maine, finishing with a 2-2 record.

Lynn will be with Echevary today in Las Vegas to prepare him for another semester at University of Nevada Las Vegas. She planned to help him buy a car.

Her trip to Nevada was planned in advance of knowing her youngest son would be playing ball in Pennsylvania. So she will miss Jaren’s game today.

“I hope they play well,” she said, noting that it is important to spend time with each of her three sons.

On Sunday, she will fly out to Pennsylvania to be with Jaren.

Over the summer, Lynn juggled her schedule to be with her two boys, who were playing in crucial baseball games at the same time. At one point, one was in Hawaii and the other in Sacramento, Calif.

If her husband were around, Lynn said the two would split up, so each son could have one parent at his game. Instead, she had to choose to be with one son at a time.

“I know for the boys it’s a challenge, not having their father,” Lynn said.

She and the family take each day “one step at a time.” They have been blessed with family and friends who have offered love and support that has helped them deal with the loss of Tony. Lynn thanked her sons’ coaches for their amazing seasons.

Overall, she still is overwhelmed by her sons’ storybook seasons.

“It is very exciting to watch, and I’m still trying to process all of it,” she said Tuesday after her workday as a clerk at Lihikai Elementary School.

“I think it teaches them that hard work pays off and teamwork, just working together. They (also) develop friendships with all the players that they will have for the rest of their lives,” Lynn said.

Jaren and Zach began playing baseball when they were 4 or 5 years old. Even though Tony, a Boston Red Sox fan, loved baseball and had games on all the time on TV at home, he didn’t push the sport on the boys, Lynn said.

For Jaren, the third baseman and pitcher playing today, he’s always loved baseball, which came easy for him. For Zach, an outfielder and pitcher, he had to work harder at it but found success.

Tony taught the boys the game when they were younger and “tinkered around with the boys at home,” she said. He would be proud of Jaren and Zach.

Before he died, Tony told the boys that he would always be around for them. Lynn took Tony to the Mainland for the games; she wears a pendant with her late husband’s ashes.

“I tell the boys, ‘Dad’s always here,’ ” she said, and if something good happens, “that’s probably him.”

Feleti Afemui, the 2016 MIL Defensive Player of the Year, is a redshirt sophomore linebacker at Vanderbilt.

William Keliihoomalu IV, 32, of Wailuku, appears in 2nd Circuit Court on Thursday. He was set to be sentenced but requested a delay and agreed to be jailed until his new sentencing date. The Maui News / LILA FUJIMOTO photo

Lynn Pascual (from left) stands next to her youngest son, Jaren, who is playing in the Little League World Series today. Next to Jaren is his father, the late Anthony “Tony” Pascual, along with brothers Zach Pascual and Cade Echevary.

“That’s what makes the state of Hawaii, the law enforcement community, so unique. . . . We realize that if there is any issue, man-made or natural disaster, we are always going to be relying on each other.” — Maui Police Chief Tivoli Faaumu