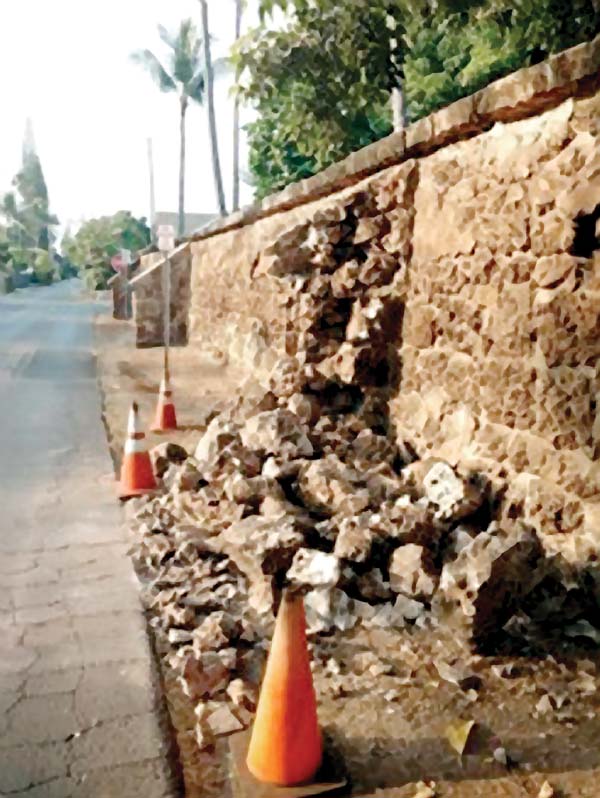 One of the buttresses on the exterior wall of the historic Lahaina Prison that was damaged in a hit-and-run incident last year soon will be repaired, with work slated for completion by the end of this year, according to the Lahaina Restoration Foundation.

On June 15, 2018, a vehicle crashed into the more than 150-year-old wall on the Wainee Street side, scattering coral blocks that were originally part of the fort at Lahaina Harbor. The vehicle damaged a 4- to 5-foot tall section of the wall, but the structure of the wall wasn’t compromised, said Ryan Morales, who’s with the foundation that maintains and oversees the prison and other historical sites in Lahaina.

Foundation officials said it is difficult to find masons who are skilled in working with lime mortar, which was used during those times, instead of modern concrete.

But the foundation is consulting with a local mason to do the work.

“I have great confidence that the wall repairs will be complete by the end of 2019,” she said.

A year since the incident, the foundation has been able to raise $10,000 for the repairs, thanks to donors. Morales said costs could exceed that total.

It took a lot of effort to push the repairs through, as the foundation wanted to ensure the damage was repaired as close to the original construction as possible. So, it sent lime mortar chips that fell from the wall during the crash to Construction Materials Consultants, based out of Stirling, in the United Kingdom, Morales said. The analysis itself took about a month.

“It’s important to keep the historical nature of the site real. You could just replace anything on a building, but then it becomes its own thing,” Morales said.

He explained that working with lime mortar is like a “lost art in modern masonry.”

In addition to analyzing the wall composition, the foundation has secured permits to start the work, including a special management area permit and a Historic District permit. The project is exempt from a building permit.

The coral blocks that had scattered during the incident are secured at the site. The blocks were taken from the fort at Lahaina Harbor and repurposed for the prison’s massive walls when it was built in the early 1850s to detain the rowdy whalers that were causing havoc in town, according to the foundation.

When oil was discovered underground in Pennsylvania in 1859 and the demand for whale oil plummeted, the whaling ships and their crews left town, and the prison fell into ruin.

In 1985, the Lahaina Restoration Foundation, in partnership with Maui County, restored the prison.

Morales said he has not heard any information about the person who could be responsible for the incident.