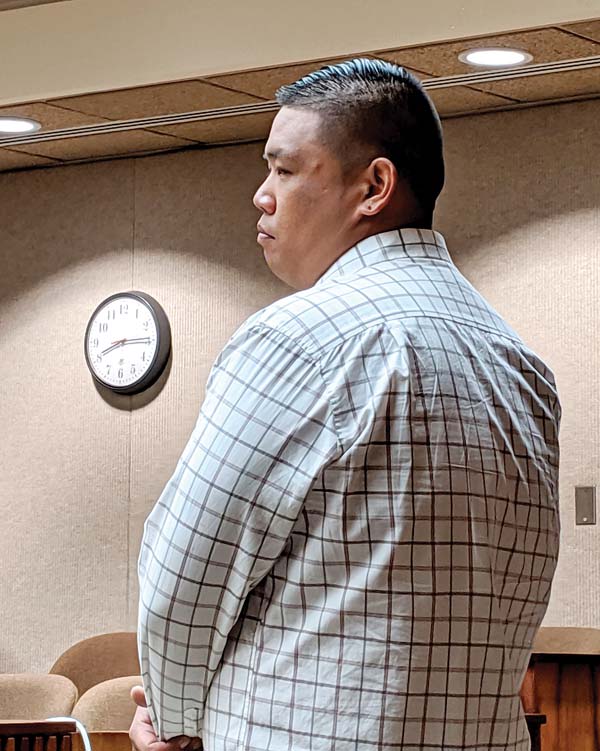 William Keliihoomalu IV, 32, of Wailuku, appears in 2nd Circuit Court on Thursday. He was set to be sentenced but requested a delay and agreed to be jailed until his new sentencing date. The Maui News / LILA FUJIMOTO photo

WAILUKU — A man who had pleaded guilty to robbing Tokyo Lounge in Wailuku agreed to be jailed while he awaits sentencing in the case.

William Keliihoomalu IV, 32, of Wailuku was set to be sentenced Thursday in 2nd Circuit Court.

But his attorney, Richard Gronna, asked for a delay so Keliihoomalu could be interviewed by a probation officer and provide additional information for a report prepared for his sentencing.

Gronna said information in the report would be important because it would be considered by the Hawaii Paroling Authority in deciding how much prison time Keliihoomalu would have to serve before being eligible for parole.

In May, Keliihoomalu pleaded guilty to first-degree robbery.

In his plea form, a statement of facts to establish his guilt said “myself and others committed a theft by the use of force while armed with a dangerous instrument.”

Police identified the two men as Keliihoomalu and co-defendant Kapuaoheoheonolaniehiku Harrell, 30, of Kahului.

Harrell had a baseball bat and took the owner’s purse containing cash as he fled, police said.

Keliihoomalu is facing a 20-year prison term for first-degree robbery.

In exchange for Keliihoomalu’s guilty plea, the prosecution agreed to advocate for his “immediate parole” when he goes before the parole board.

On Thursday, Judge Peter Cahill at first said he didn’t want to delay Keliihoomalu’s sentencing. But when Gronna again asked for a delay, Cahill asked if Keliihoomalu was willing to go into custody until a new sentencing date.

“He indicates he is,” Gronna said.

After being arrested in June 2017 and held in lieu of $250,000 bail, Keliihoomalu was released on supervision in April 2018, court records show.

But the judge said he was concerned that Keliihoomalu would face a longer prison term if he were arrested and convicted of another crime while out of jail. Cahill set bail at $1 million for Keliihoomalu, who was taken into custody Thursday.

His sentencing was set for Dec. 3.

Court records show Harrell is awaiting trial in the case. In addition to the first-degree robbery charge, Harrell is facing drug charges in two other cases.