Preliminary report on necropsies is released by NOAA 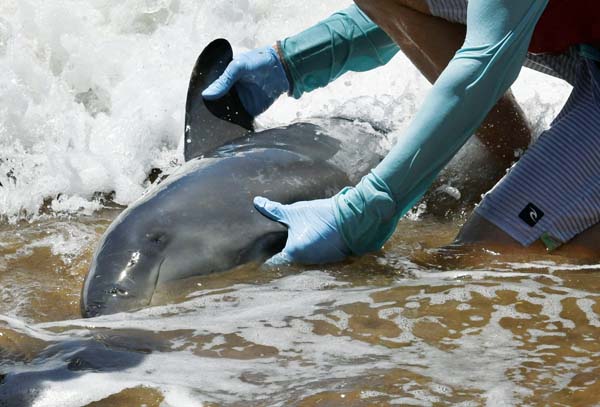 National Oceanic and Atmospheric Administration Fisheries officials came to the aid of 10 pygmy killer whales that beached themselves at Sugar Beach on Aug. 29. The Maui News / MATTHEW THAYER photo

Necropsies identified four whales that beached themselves at Sugar Beach in August and a calf that was found dead offshore as pygmy killer whales and indicated that they suffered lung abnormalities and may have been fighting infections, National Oceanic and Atmospheric Administration Fisheries reported Friday.

In the early morning of Aug. 29, 10 pygmy killer whales, adult and sub-adult animals, were stranded alive on Sugar Beach. A dead calf of the same species, likely 3 to 6 months old, was found later in the day, said the information update from NOAA Fisheries, Pacific Island Regional Office, Protected Resources Division, and the University of Hawaii Stranding Laboratory, Hawaii Institute of Marine Biology.

Six of the 10 live whales, which initially were thought to be melon-headed whales, were eventually refloated back into the ocean after an extended effort. They have not been seen since, the report said.

The four remaining whales were euthanized about an hour after the effort to refloat the six stronger whales. The decision to euthanize the whales was based on their health; the difficulty in refloating the six whales, which were restranding and showing signs of further stress and deteriorating health; and a tiger shark reported in the area that would have put the four whales and the response team in danger, the report said.

The deceased whales included a calf, an immature female, an immature male, a lactating female and a pregnant female, the report said. Genetic testing was being performed on the calf to better understand the relationship between the calf and the other deceased animals.

The necropsies showed that the calf had a significant respiratory infection, the report said. The other animals had some degree of lung abnormalities and had abnormal lymph nodes, which suggest they were fighting an infection.

Further results were pending on organ analysis and inner ear examinations to assess if acoustic trauma, possibly from sonar or explosions, played a role in mortality. There also will be disease screening to determine the potential role of infectious disease on the mass strandings, focusing first on morbillivirus, the report said.

Morbillivirus was found last year in a stranded Fraser’s dolphin off Maui and was responsible for 1,500 dolphin deaths along the East Coast from 2013-15, the report said.

The six stronger whales were refloated as soon as possible based on having no obvious signs of injury or illness, favorable beach and environmental conditions and a chance to find open ocean. The initial hope was to refloat the remaining four animals in a second wave, the report said.

Within 15 minutes of refloating, the animals began coming back to shore about a half-mile down the beach from the original stranding point. All six whales were observed “milling” nearshore and “a restranding event was imminent,” the report said.

Two of the six whales had to be held in shallow water while the other four continued to come in close to shore. A tiger shark was reported in the area, the report said.

After more than an hour and several more efforts to support and redirect the whales out to sea, all six eventually moved farther offshore. They were monitored by staff on a state Division of Conservation and Resources Enforcement Jet Ski until they could no longer be seen.

On Sept. 13, NOAA Fisheries monitored a group of six pygmy killer whales “milling” in the water off Maui. However, dorsal fin photo ID comparisons indicated that they were not the same whales that had been stranded in August, the report said.

“The success rate of most rescue operations is largely unknown if released animals are not tagged and monitored,” the report said. “Thus, the status of the six whales that were refloated is unknown.”

Stranding takes a toll on whales and can cause physical trauma and physiological stress and shock, the report said. Sometimes, healthy animals tend to other animals that are in poor health and follow them ashore, compromising their health.

Pygmy killer whales have very strong social bonds and are known to stay together as small groups for many years, the report said. They are not generally seen near shore.

There have been stranding events involving small groups of pygmy killer whales in the Maalaea Bay area, including one in 2009. Health issues with one or more whales “has historically been implicated as the likely stranding cause,” the report said.