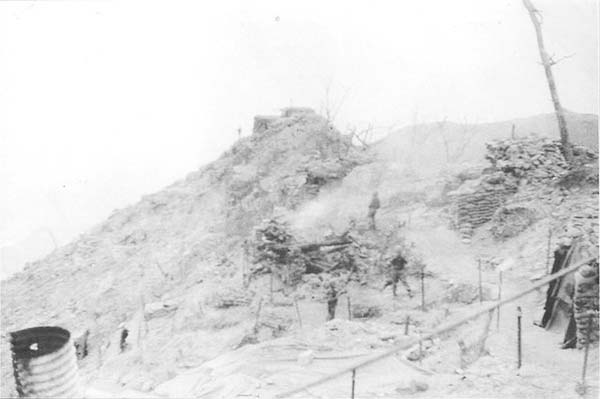 A bunker at Sandbag Castle is shown after a direct mortar hit from a 500-pound bomb in this photo taken in January 1953 during the Korean War.

The exhibit “The Forgotten War Revisited” about the Korean War opens Monday and runs through Dec 27 at the Nisei Veterans Memorial Center.

The exhibit, which is open weekdays from noon to 4 p.m., is presented by the Korean War Veterans Association, Maui No Ka Oi Chapter 282, with support from the Maui Korean Community Association and in partnership with the Nisei Veterans Memorial Center. The exhibit is free and open to the public.

Along with panels detailing the history of the Korean War, visitors will be able to see artifacts from personal collections of Korean War Veterans Association members. Docents for the exhibit will be Korean War veterans.

The Korean War, from 1950-53, is often referred to as the “Forgotten War,” despite an estimated 1.2 million lives lost in battle on all sides. Because it broke out only five years after the end of World War II and the combat ended only two years before the start of the Vietnam War in 1955, the Korean War has not received the attention it deserves, the center news release said.

Some Maui nisei, second-generation Japanese Americans who served in World War II, also fought in the Korean War. Of the estimated 275 Hawaii service members killed in the Korean War, about 80 were from Maui County.

“Keeping alive the histories and memory of all who served and fought in Korea is important so present and future generations will understand and learn from their sacrifice,” the center news release said.

The nonprofit center’s mission is to ignite the potential in people by inspiring them to find the hero in themselves through the legacy of the Nisei veterans.

For more information, go to the center website at www. nvmc.org.