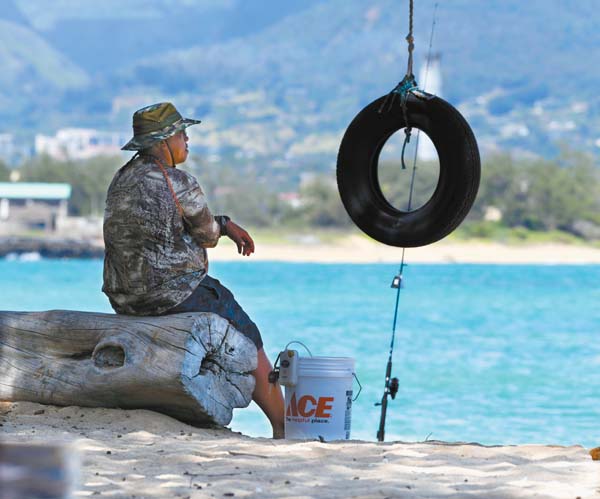 Roddy Dumlao keeps an eye on a pair of fishing poles while unwinding after work last week at Kanaha. After pulling an eight-hour shift at the Kahului Generating Plant, the Maui Electric Co. worker still had the plant in sight as he fished for papio. “I just got off work,” he said. “It’s relaxing. To catch dinner, that’s just a bonus.”

Titans quarterback Marcus Mariota talks in the huddle during Tennessee’s 19-17 loss to the Indianapolis Colts on Sunday. The Titans head to Jacksonville to face the Jaguars on Thursday. AP photo

Crews in the Pailolo Challenge make their way from DT Fleming Beach to Molokai on Saturday. The race included 82 crews. Naim Ferguson photos

An agricultural irrigation ditch flows near Pulehu Road. East Maui Irrigation, which brings water into Upcountry and Central Maui from East Maui through a diversion system, and its parent company, Alexander & Baldwin, have applied for another one-year revocable permit to take water from state land. This photo was taken in July. The Maui News / MATTHEW THAYER photo