Safety the goal at Kamehameha III School in Lahaina 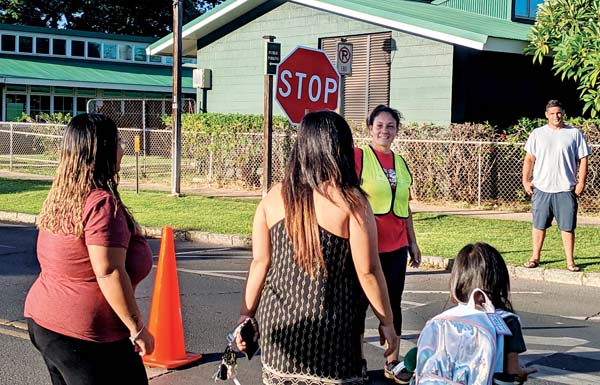 LAHAINA — As students made their way across Front Street to King Kamehameha III Elementary School on Monday morning, police officers reminded a few parents to use crosswalks, and 5th-graders thanked those who did.

“We came out here to try and make this street better and safe,” said 11-year-old Marie Rosenthal.

She joined a handful of her classmates who wore safety vests and handed out “Keiki Cross Safely” fans in front of the school as students and parents were arriving.

Banners reminding people to use crosswalks were posted on the fence fronting the school for the launch of a school safety campaign that will continue through the week.

The school started the effort to promote safety last year after noticing that some parents were parking in the public parking lot across the street from the school. From there, some were cutting across the street through traffic instead of using a nearby crosswalk, where Maui Police Department crossing guard Lei-Ann Hayes stopped traffic for children to cross. 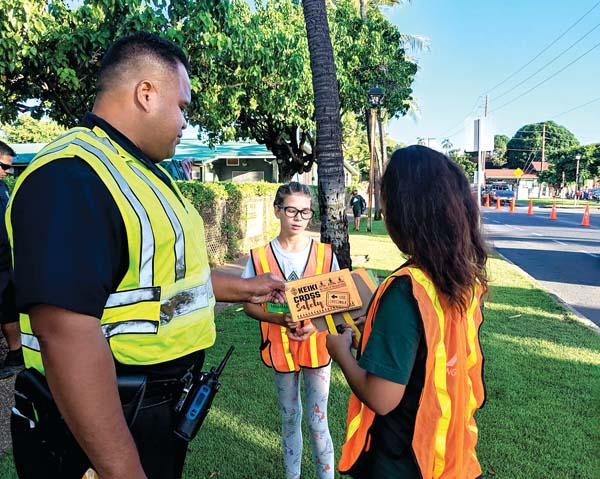 She said some drivers have to be reminded to wait until children are all the way across the street and out of the crosswalk.

The week after, students again counted the numbers of people – and in some cases dogs – that weren’t using the crosswalk, Ueki said.

“They noticed a decrease in the number of people walking across the street without using the crosswalk,” he said.

The school Parent Teacher Organization donated the banners and the materials for the fans, which 5th-graders put together.

“I thought this would be a good thing to help people realize that using the crosswalk is safe and when you don’t use the crosswalk, people could run over you,” said 10-year-old Oliana Schur.

Ten-year-old Benjamin Meares said he volunteered to help hand out fans “so people won’t get hurt, so you won’t get hit by a car,” including his younger sister, Niya, a 2nd-grader.

In addition to parents, the students handed out fans to some tourists who happened to be walking by the school.

“It’s a tight-knit community, so we want to make sure everybody’s safe,” Ueki said.

“To start off the week this way, it just sets a precedent for the rest of the week and hopefully will continue on for weeks and months to come,” he said. “If a student feels safe, students can learn, and if a teacher feels safe, teachers can teach. And everyone can have a great time in school.

“We have too many traffic fatalities already this year. So to be able to educate the community, even if it’s just a reminder, it could prevent injury and loss of life.”

Yoshida warned a few parents who were about to cross the street outside of crosswalks.

“I can see the parents’ frustration,” said Yoshida, who also talked to someone packing a child on a moped.

He said the school might benefit from bringing back a Junior Police Officer program.

“This is a unique school,” he said. “There’s a narrow roadway, but they seem to make it work every morning.”

Tevaga said having the students deliver the safety message made a difference.

“This is pretty simple, but really huge in a heartfelt sense,” he said. “We’re supposed to set the example. When a kid reminds us, then you become humble and then we learn from that.

“If anybody came across today and they got upset, they have to get an attitude adjustment of why we’re here and the importance of using the crosswalk for safety.”