Witness: Machete-wielding suspect killed victim thinking he was a demon 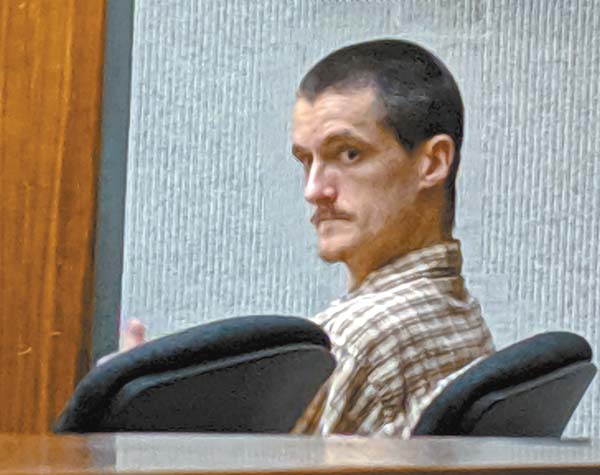 WAILUKU — Murder suspect Kumulipo Sylva had challenged another man to a fight in the parking structure before going into a Queen Ka’ahumanu Center bathroom and slashing the man’s neck with a machete to kill him, a witness said Tuesday.

“He comes in with a machete, starts threatening us . . ,” said Pukalani resident Kyle Keoho, who was drinking shots of alcohol in the bathroom with his friend Eduardo Alejandro Cerezo on the afternoon of March 18, 2018.

Keoho said he heard Sylva say, “You guys are demons, I send them to the moon” before “he chops (Cerezo) in his neck.”

“He falls to the ground,” Keoho said.

Then Sylva said, “Believe it or not, he was a demon,” Keoho said. 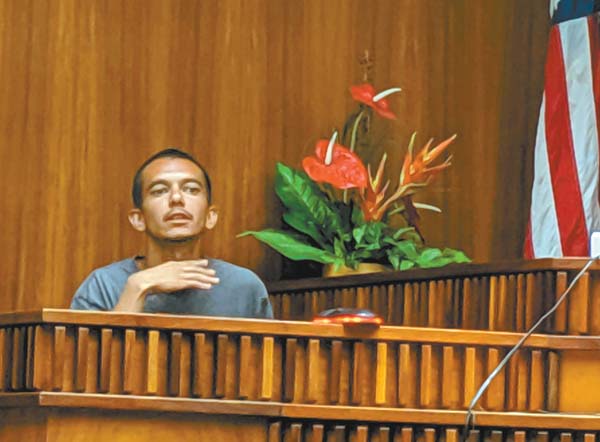 Keoho testified after a jury was seated Tuesday afternoon in Sylva’s 2nd Circuit Court trial. Sylva, 24, has pleaded not guilty to second-degree murder in the killing of Cerezo, a 35-year-old Makawao resident.

Deputy Public Defender Ben Lowenthal, in his opening statement, said evidence would show that Sylva was suffering from a mental disorder that caused him to experience delusions.

“Kumulipo Sylva walks into the bathroom at the mall and he does not see a human being,” Lowenthal said. “He does not see Alex Cerezo as a person. He sees a demon, a creature from hell.”

“Because of this very serious mental disorder,” Lowenthal said Sylva “was unable to appreciate what he had done.”

Lowenthal said the jury could find Sylva “not guilty by reason of insanity and send him to the hospital.”

Keoho said he and Cerezo got on the Maui Bus at Pukalani Community Center at about 2 p.m. March 18, 2018, to go to Queen Ka’ahumanu Center.

The other passenger, identified as Sylva, was sitting in the front of the bus while Keoho and Cerezo sat in the back.

When they got off the bus at the shopping center, Sylva said he wanted to fight Cerezo and wanted Cerezo to follow Sylva to the parking structure, Keoho said.

He said Sylva appeared to go to the parking structure, then “he comes storming back” and said he was angry at Cerezo.

Cerezo and Keoho went to the nearby drug store to buy liquor and juice, then took the escalator to the second-floor bathroom near the Macy’s Mens Store to drink shots of alcohol, Keoho said. Then the two went back downstairs to a sporting goods store. As they were leaving the store, Cerezo apparently saw Sylva and asked Keoho if that was the man from the bus.

“I have bad eyesight, so I could not see,” Keoho said.

He said he and Cerezo went back to the bathroom.

Sylva had a machete, Keoho said.

“Where does he hit Alex?” Tani asked.

“His neck, right in his neck,” Keoho said.

After Sylva left the bathroom, Keoho said, “I make sure he’s gone cause I’m scared too.”

Under cross-examination by Deputy Public Defender Zach Raidmae, Keoho said he had heard Sylva talking about demons during the bus ride.

After leaving the bathroom and the mall that day, Sylva ran up Wakea Avenue and hid his camouflage jacket under a trash bin before continuing on to Kahului Community Center and hiding the machete near the park tennis courts, Tani said in his opening statement.

Police arrested Sylva at the park.

Detective Dennis Clifton, who interviewed Sylva the next day, said the defendant at first said, “why does it matter” when asked where the machete was.

After Clifton explained that police wanted to recover the machete so children or others in the area wouldn’t be harmed by it, Sylva said he had hidden the weapon under leaves next to the concrete pad for the tennis courts, Clifton said.

He said detectives located and recovered the machete, which Sylva confirmed was his.

The trial was scheduled to continue today before Judge Richard Bissen.