Evacuations, road closure due to fire 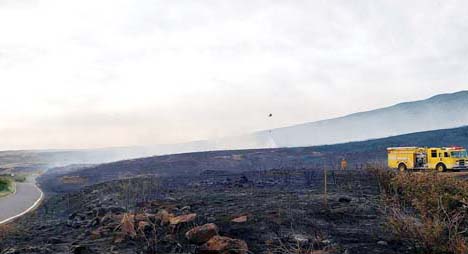 At least a dozen homes in Kahikinui were evacuated late Thursday afternoon as an estimated 100-acre wildfire approached the area, according to a county news release.

A portion of Piilani Highway between Milepost 25 and Kipahulu Park was closed Thursday afternoon. At about 5 p.m., some traffic was passing through the area and the road was completely open by 5:40 p.m.

Emergency management officials were working on setting up a shelter for residents, but the evacuation order was lifted by 6 p.m., county officials said.

The fire was first reported at 1:40 p.m. at Milepost 26 on Piilani Highway. Fanned by strong winds, the blaze moved northwest toward the homes late Thursday afternoon, the news release said.

Responding to the fire were multiple Fire Department units, helicopters and heavy equipment.