Police work with families of lost loved ones to educate 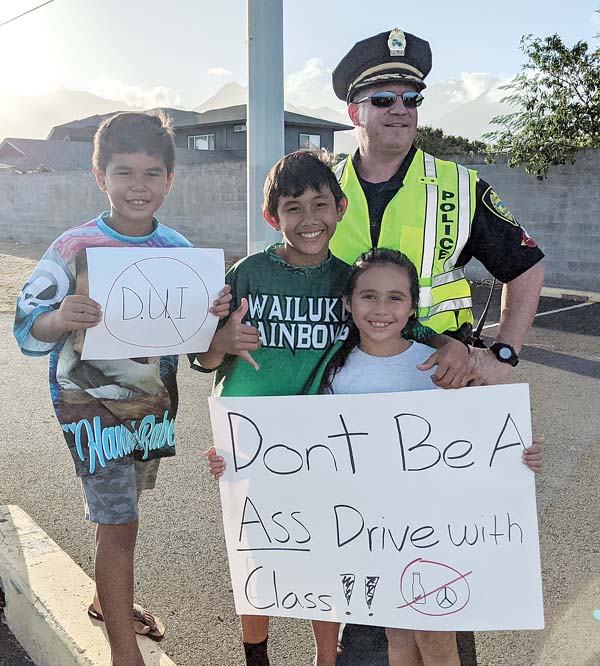 Maui police traffic commander Lt. William Hankins stands with (from right) Hiki Hoopii, Kalaheo Kanae and Aisea Taai at a sign-waving Tuesday afternoon on Kuihelani Highway near Puunene Avenue in Kahului. About 60 people showed up for the event organized by the family of 19-year-old Hannah Brown, who died in a June 23 collision with a suspected drunken driver going the wrong way on the highway. Participants held photos of loved ones killed in drunken-driving crashes and signs to remind motorists not to drink and drive. -- The Maui News / LILA FUJIMOTO photo

KAHULUI — As the number of fatal crashes on Maui County roads continues to rise, police say they need help from the public to stem the tide.

“Before, the mentality was we had to get out there and arrest everyone, all the impaired drivers. That’s the old-school mentality,” said police DUI Task Force Sgt. Nick Krau. “But over the years, we’ve realized that enforcement is just one part of the whole thing and that we need to work to educate the public as well as raising awareness.

“There’s no better way to raise awareness than to be out here with the families who have been devastated by impaired driving tragedies.”

At two events this month, police have joined with Mothers Against Drunk Driving and family members of 19-year-old Wailuku resident Hannah Brown, who died in a June 23 collision on Kuihelani Highway in Kahului. She was a passenger in a car that was hit by a suspected drunken driver going the wrong way on the highway, police said.

On Nov. 22, police set up the inaugural Hannah Brown Memorial Intoxication Checkpoint within a quarter-mile of the scene where she died. One driver was arrested for driving under the influence of alcohol and having an open alcohol container in his vehicle. Another driver was cited for driving with a suspended license and not having auto insurance.

Charlene Brown said she was happy that police arrested only two people at the checkpoint named for her daughter.

“At least those two lives were saved that night,” she said. “It felt good.”

Going to the crash scene for the first time that night, “I felt strong, like she was with me the whole time,” Brown said.

On Tuesday afternoon, with Hannah’s birthday approaching Friday, family members organized a sign-waving that drew about 60 people to Kuihelani Highway near Puunene Avenue in Kahului.

Passing drivers honked and waved as Charlene Brown, her husband, Everett Brown, and their sons, Sketch and Sheriff, stood by a banner with Hannah’s photo and the message “Don’t Drink & Drive!”

Among those joining the gathering were Lea and Stan Aquino, mother and stepfather of Lahainaluna High School graduate Jonah Makua Ragsdale, who was killed in a Feb. 19, 2018, crash on Oahu.

He and Hannah Brown attended Lahainaluna together. After his death, she and another classmate organized a memorial run for Ragsdale.

The Aquinos held photos of Ragsdale and his friend Daniel Mole, who was also killed when the two were hit by a drunken driver while passing tools to someone fixing a tire on Ragsdale’s truck in a coned-off area on the side of the road, Stan Aquino said. He said a third person who was hit survived.

Ragsdale had pulled his truck off the road to fix the wobbling tire “because he didn’t want to kill anybody,” Aquino said.

The couple flew to Maui to join the sign-waving “to bring awareness” with the holidays approaching, Lea Aquino said.

“It’s becoming an epidemic,” she said. “It doesn’t have to happen.”

Five people have died in traffic crashes on Maui County roads this month, bringing the total for the year to 22. The number is already higher than the 19 traffic deaths last year.

At least 15 of the fatalities this year were drug- or alcohol-related, police said.

Lt. William Hankins, commander of the police Traffic Section, said he hoped the events were raising awareness about the consequences of impaired driving.

“This is not for the police. This is for the Browns. Every day, they have to live with this. Every day.”

“They’re a big family,” he said. “They have so much love to spread the awareness.”