Visitors will pay to park at Big Beach: State park in Hana may be next on list 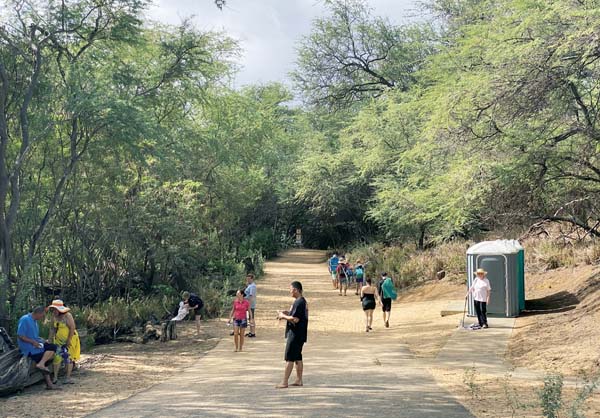 MAKENA — Big Beach could mean big bucks for the state parks fund with a new parking fee for nonresidents slated to launch in early January.

Meanwhile, the state Department of Land and Natural Resources said it’s also eyeing Waianapanapa State Park in Hana to add to the list of Hawaii parks with parking fees.

The DLNR Division of State Parks announced Friday the plans to launch paid parking — $5 for nonresidents and between $10 to $40 depending on passenger capacity for registered commercial vehicles — at Makena State Park, also called Big Beach or Oneloa Beach, along with electronic payment stations at all three lots and a “roaming ambassador” or parking attendant, starting the first week of January.

Hawaii residents with a valid state ID or driver’s license will not have to pay. Parking will continue to be on a first-come, first-served basis.

So far, the only state park on Maui that collects fees for private passenger vehicle parking is Iao Valley State Monument, which is also $5 per nonresident vehicle and free for residents with ID. Collection began in 2011, according to DLNR. 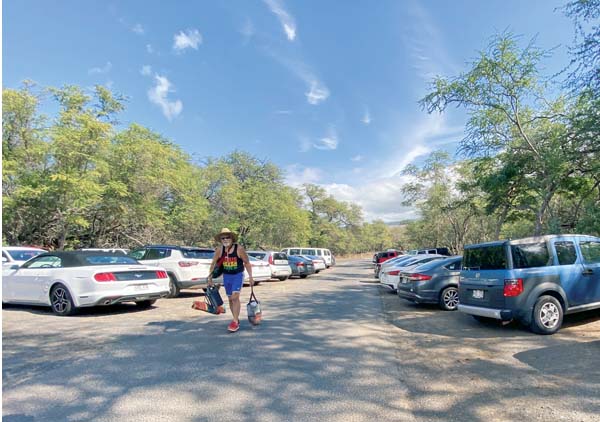 Around midday Friday, there were about 200 vehicles among three lots at the popular South Maui beach, with the majority parked at the first entrance.

Visitors and residents had mixed reactions, with the majority of visitors interviewed saying that Hawaii already has costs for visitors and adding another fee is difficult.

Stu Bailey, who’s been coming with his wife, Jamie, to Maui and Makena Beach Park for 40 years, said their home of Coachella Valley is “just like this, it’s a tourism mecca, but there, not one parking meter, no paid parking anywhere.”

“People would quit going, they just would,” Jamie Bailey added.

Bernd Friedman, a Jaws Fish Tacos food truck worker stationed at Big Beach, was worried about overflow traffic, where people would park along the road and possibly cause a hazard.

“I wouldn’t do it at all,” he said. “Life over here is already so expensive.”

“Don’t do it so we get more business,” said Sophie Lambla, his coworker.

Portland, Ore., visitors Jim and Nancy Kratochvil were split, with Jim against the fees and Nancy saying if it adds more parking, she’s for it.

Some Maui residents said they supported the fees but having to show ID may be a hassle.

“Shoot, it’s kinda junk that you gotta go through a person first and show ID,” said Pukalani resident Jason Lee, who used to frequent Big Beach. “But on the other hand, make the tourist pay.”

DLNR spokesman Dan Dennison on Friday said that Makena was eligible for fee collection because of the impact from its “high concentration of out-of-state visitors” and high volume of parking.

Dennison added that Waianapanapa in Hana is being “evaluated for inclusion via the rule-making process.”

The fees, which go to the state park special fund, will help the system’s “huge backlog of deferred maintenance and improvements to enhance quality,” according to the DLNR Division of State Parks announcement.

Dennison didn’t specify Friday what improvements the state could do at Makena with the extra income. But with more than $40 million of deferred maintenance statewide, the parking fees could help support the park that generates the income as well as other parks around the state.

Of the 52 state parks in Hawaii, eight collect fees between $3 and $5 for nonresident parking. One of the eight, Diamond Head State Monument, also charges residents the same fee of $5. Pedestrians and bicyclists must pay $1 for entry at Diamond Head, Akaka Falls and Ha’ena state parks.

“We believe parking fees are nominal and in line with what parks in other states are charging,” state Parks Administrator Curt Cottrell said in a statement.

Initiated during the economic downturn over a decade ago, paid parking at state parks was approved by the Board of Land and Natural Resources, Dennison said. Then, in 2015, Hawaii law set the rules in place after statewide public hearings and the governor’s approval.