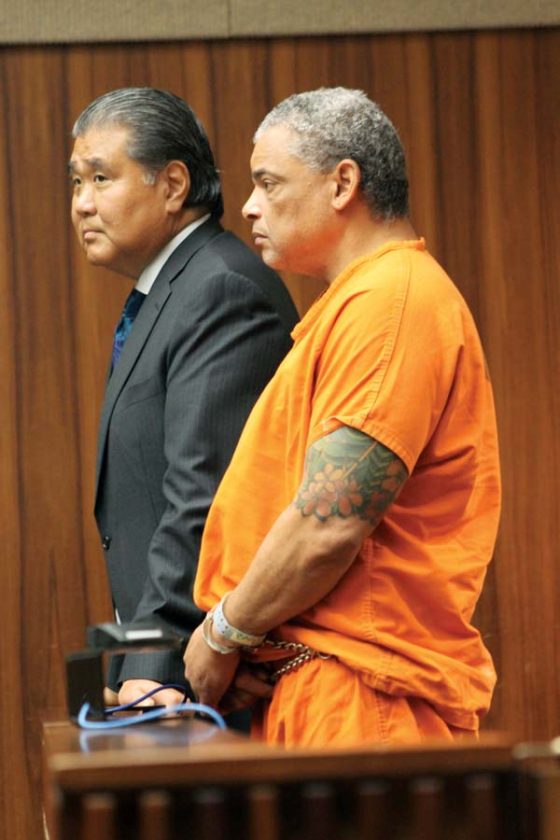 Bernard Brown (right) stands alongside attorney Keith Shigetomi in 2nd Circuit Court on Thursday. Judge Peter Cahill set Brown’s trial for March 16 after Shigetomi asked for a continuance to give the defense more time to prepare. Brown has pleaded not guilty to the second-degree murder of ex-girlfriend Moreira “Mo” Monsalve. The Maui News / COLLEEN UECHI photo

WAILUKU — The trial of Bernard Brown, who is accused of killing ex-girlfriend Moreira “Mo” Monsalve, has been scheduled for March 16.

Brown’s attorney, Keith Shigetomi, asked 2nd Circuit Judge Peter Cahill on Thursday for a continuance to allow the defense more time to prepare for the trial. Shigetomi explained that there are “60 to 70 discs” that need to be picked up and reviewed and that he wasn’t sure what they contained.

Cahill granted the request after First Deputy Prosecuting Attorney Robert Rivera had no objection and asked only that the additional time not be counted against the state under speedy trial provisions.

Cahill added that the intent had not been to go to trial on Thursday.

Brown, 48, has pleaded not guilty to the second-degree murder of Monsalve, a 46-year-old mother of three who went missing Jan. 12, 2014. Monsalve dropped her daughter off at Kahului Airport at about 4 p.m. that day and was last seen that night at Brown’s Iao Parkside apartment in Wailuku.

Two days later, after Monsalve hadn’t shown up for work or responded to phone calls, daughter Alexis Felicilda reported her missing. On Jan. 16, 2014, some of Monsalve’s personal belongings, including her purse and broken cellphone, were found in a trash bin near the Velma McWayne Santos Community Center in Wailuku.

Shortly after Monsalve was reported missing, Brown told police she left his apartment at about 10 p.m. Jan. 12, 2014, saying her son was going to pick her up because her car was being repaired.

Police, family and volunteers have conducted several searches over the past five years but have been unable to find Monsalve.

However, after the FBI helped repair Monsalve’s cellphone and the Maui Police Department’s Cyber Crimes Unit pored through the evidence, they were able to gather more information and “paint a picture of what took place,” police Assistant Chief Victor Ramos said in September.

Brown, who had moved to California, was taken into custody that same day by the FBI Violent Crime Task Force and the Sacramento Police Department before being extradited to Maui. His bail was set at $1 million.

Shigetomi, who was appointed in October to represent Brown after the Public Defenders Office withdrew due to a conflict, said Thursday that Brown’s position “is he doesn’t not want to wait” for a trial, but that Brown understood Shigetomi’s need to prepare. Brown is currently being held at the Maui Community Correctional Center.

Cahill told Brown to discuss whether his attorney needed more time as the trial approaches. If he were to get a new lawyer, there was no guarantee who he’d get, and any new attorney would have to start all over again.

“Your lawyer needs time to prepare, and I understand you’re in custody and it’s difficult to be in custody,” Cahill said. “But I’m just putting it out there.”

The judge also set an informal, off-the-record pretrial conference with the attorneys for Jan. 16.