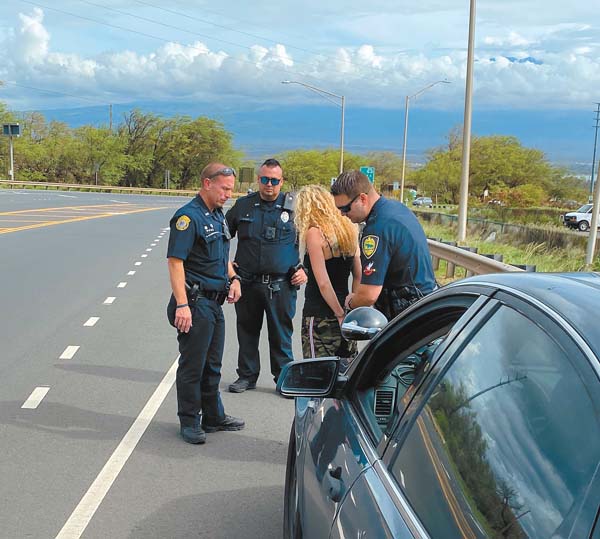 DUI Task Force officer Caleb Guarriello handcuffs a woman arrested for driving under the influence of alcohol Thursday afternoon on North Kihei Road. Kihei patrol officers Michael Keawekane-Hale (left) and Carlos Frate also responded to the report that the driver was weaving and going off the roadway. CHARLES HIRATA photo

When Charles Hirata saw a sport utility vehicle crossing a double-solid line to overtake another vehicle and driving on the shoulder of Honoapiilani Highway near Ukumehame, he called police.

The driver, a 36-year-old Makawao woman, was arrested for driving under the influence of alcohol, said Lt. William Hankins, commander of the police Traffic Section.

“We can’t be everywhere,” Hankins said. “If people didn’t call this in, this driver might have killed somebody — if not today, then another day.”

He said the woman’s blood-alcohol level was measured at more than three times the legal limit of 0.08 percent.

“People do call in on occasion,” Hankins said. “This just happened to be the perfect time where traffic officers were nearby.”

He said police will investigate reports of suspected drunken or reckless driving.

But if police don’t see the behavior reported by callers, “we can’t necessarily pull them over,” Hankins said.

“A lot of times, people don’t stop and stay,” he said. “We need a witness to say, ‘I saw that car. That’s the driver that did this.’ When we have that information, we can put this in the report.”

Then police can move forward with an impaired-driving investigation, Hankins said.

“She would have definitely gotten towed,” Hankins said. “The message has been sent. People are still dying in DUI-related crashes.”