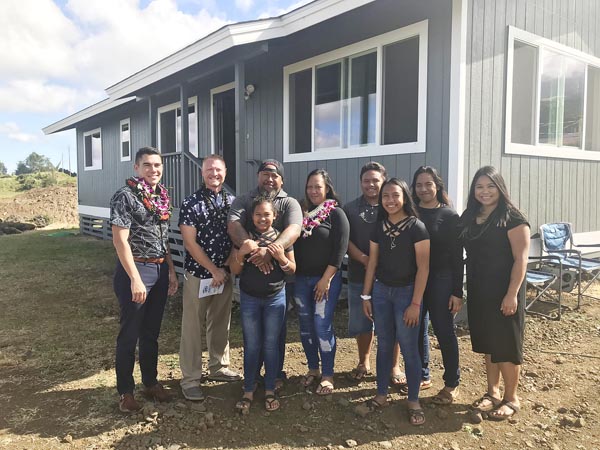 The Kuailani ohana received the keys to their new home in Kula on Wednesday, a partnership between the Department of Hawaiian Home Lands and Habitat for Humanity.

About 27 volunteers helped complete the Kula project, totaling over 1,100 donated hours, which included efforts from the homeowner, the homeowner’s family and friends, and volunteers from across Maui, the DHHL news release said.

“Part of Prince Kuhio’s vision was to empower Native Hawaiians,” said DHHL Deputy Director Tyler Gomes. “The fact that this family put in so many hours is a testament to that empowerment.”

DHHL’s partnership with Habitat for Humanity Maui helps beneficiaries who may not have the means to purchase a turn-key home “but do have the will, alongside their families and friends, to build a home that is suitable to their needs,” he said.

The new 1,200-square-foot home has four bedrooms and two bathrooms.

“Our whole family came out to support us and help to build this house,” said lessee Kiley Kuailani. “I’m just so grateful for the many hands that helped us. I know where every nail in this house is, and I know my dad’s mana is here with us.”

Matt Bachman, family services manager at Habitat for Humanity Maui, said four more homes are lined up for construction. Land is already being cleared and building could start in July, maybe sooner, he said.

DHHL is in the process of awarding 395 lots statewide and has over 1,300 lots in its production pipeline that are anticipated to be completed over the next five years.