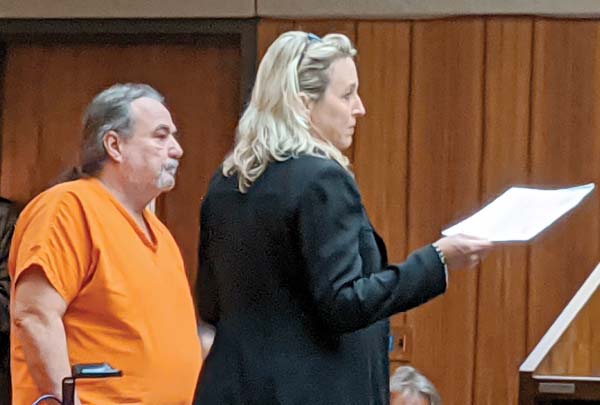 WAILUKU — Second Circuit Judge Rhonda Loo granted a prosecution request Wednesday to require a murder suspect to provide a saliva sample for DNA comparison in a former cold case from nearly 20 years ago.

Anthony Moreno, 59, had objected to the request.

He has pleaded not guilty to a charge of second-degree murder of 38-year-old Kimberly Belluomini, who was found dead Oct. 27, 2000, in her second-floor apartment at Southpointe in Kihei.

She was found naked under a comforter and pillows, with her dress and underwear torn from her body and two large lacerations to her head, according to a declaration filed in court by Deputy Prosecutor Andrew Martin.

During an autopsy that ruled her death a homicide, vaginal swabs were collected from the victim, according to the declaration.

Last year, police submitted the swabs to the Scientific Investigation Section of the Honolulu Police Department to be examined for the possible presence of male DNA. According to findings in a report by the section, screening of the swabs indicated the presence of semen, and a partial DNA profile of an unidentified male was obtained from one sample.

The prosecution sought Moreno’s saliva sample by mouth swab to compare with the partial DNA profile.

In a declaration filed in court, Deputy Public Defender Danielle Sears said the prosecution’s request wasn’t necessary because shortly after the crime, Moreno had told police that he met Belluomini the night of Oct. 26, 2000, at Henry’s Bar & Grill in Kihei. He told investigators that he and Belluomini drank alcohol and danced before sharing a taxi to her residence.

Moreno told police he was with Belluomini in her apartment the night she was murdered but denied being responsible for her murder.

“Given Mr. Moreno’s statement to the police, it is going to be expected that his DNA would be found on these swabs that were taken from the deceased,” Sears said in court Wednesday. “There was a statement about consensual sex that night. So the state’s request is not relevant.”

Deputy Prosecutor Andrew Martin said the request for the sample is relevant.

“Not only does it potentially corroborate the defendant’s statement, which would be necessary, but it also would rule out other potential perpetrators,” he said.

Moreno is being held in lieu of $1 million bail at the Maui Community Correctional Center after being brought back from Florida last month to face the murder charge.

A Maui County grand jury indicted Moreno on the charge in November, after detectives with the police Criminal Investigation Division reviewed the cold case while working with Martin and the Maui County prosecutor’s office.

Moreno left Maui after 2005, living in Texas before he was located living on a boat in Florida, police said.