Fewer are self-monitoring for virus 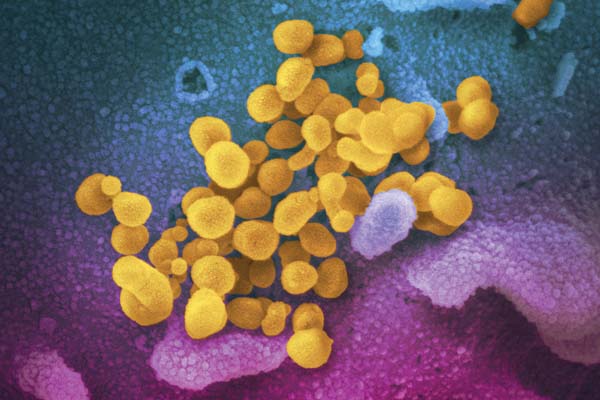 The Novel Coronavirus SARS-CoV-2 (yellow) is shown emerging from the surface of cells (blue/pink) cultured in the lab this month. Also known as 2019-nCoV, the virus causes COVID-19. NIAID-RML photo via AP

The number of people self-monitoring for the novel coronavirus, or COVID-19, on Maui has dropped from six a week ago to one as of Thursday, according to the state Department of Health.

Across Hawaii, the number of people self-monitoring — meaning that they traveled to China outside of Hubei province where the virus broke out — has declined from 47 a week ago to 35 as of Thursday. One Hawaii resident who traveled to Hubei province still is under quarantine at Pearl Harbor and will be there until Saturday.

The Health Department also said it was “continuing to actively gather facts and interview individuals” about a couple from Japan who traveled to Maui Jan. 28 to Feb. 3 and then to Oahu Feb. 3 to 7, before testing positive for the virus upon their return home. The husband still is hospitalized, while the wife has recovered, the Japan Ministry of Health told DOH.

State officials have not released details of the couple’s itinerary while on Maui. DOH spokeswoman Janice Okubo said Thursday that the department still was working to collect that information.

While there are no confirmed cases of the virus in Hawaii, the state still is waiting for the arrival of test kits. Currently, all laboratory testing to confirm the virus is being conducted at the Centers for Disease Control and Prevention lab in Atlanta. Test kits that were recently sent to state laboratories, including Hawaii, had an issue with “negative control primer probe sets,” and new kits are being developed by the CDC, according to the DOH.

The new batch is expected to arrive in early or mid-March, and Hawaii has offered to be a beta tester for the kits to ensure they work properly.

“In the meantime, if we do identify someone who meets the criteria, we would take a specimen, and we would ship that over to CDC,” Okubo said. “And then they would run the test, and they would contact us immediately when they have the results.”

Okubo said that if the department encountered someone who met the criteria for investigation and testing, they would treat them as if they were a positive case and take “precautionary measures” while they waited for the results.

Dr. Lorrin Pang, DOH Maui District officer, said Tuesday that while Hawaii doesn’t have the coronavirus test, there are tests health officials can run for other respiratory illnesses. If the person tests positive for one of those, they could rule out the coronavirus.

When asked why the department wasn’t testing people who may have come in contact with the couple from Japan, Pang said that he has to make a good case for why a person might have the coronavirus and might be contagious. Because health officials are doing this against the backdrop of the flu, Pang said it’s not realistic to test everyone with a cough or head cold and send it to the CDC.

In the meantime, local physicians are thinking more about getting their patients through flu season than they are about any potential outbreak.

“I, myself, have not seen any patients who would meet the criteria for testing,” said Dr. Kenneth Kepler, medical director of the Kihei Wailea Medical Center. “I would still suggest that the real risk to people is the familiar flu virus at this point. I’m still telling my patients they should get immunized.”

When asked how patients could distinguish between the basic symptoms of the flu and COVID-19, Kepler said that “the primary way right now is what their epidemiological risk factors are.”

That includes “people who have been exposed to people who had coronavirus or people who have been to the endemic areas of it, meaning China at this point,” Kepler explained. “If you don’t have exposure to that, currently we’re asking people to just call their doctor and see what they think in terms of getting evaluated for their illness and leave it at that.”

It doesn’t mean the clinic doesn’t have precautions in mind. Kepler said that if there were someone whom they suspected of having the virus, they would be taken into the clinic through a separate entrance and placed in an isolated room while doctors took standard, respiratory droplet and airborne precautions, including plastic gowns, gloves and N95 masks.

The DOH has sent doctors specific steps and guidance for diagnosing and also has available a 24-hour hotline for physicians to call and talk to an epidemiologist.

Personally, Kepler said he’s “not losing sleep over the coronavirus, but it concerns me like any other potential life-threatening illness that we need to be aware of.”

“I would suggest we always need to be concerned with our health, and if we have some type of illness that we don’t feel comfortable with, we should do the best we can to get well and try to avoid getting other people sick,” he said. “That’s true whether we have a new unknown type of virus going around or whether it’s something as known as the common cold.”

Dr. William Mitchell, president and CEO of Maui Medical Group, which has locations in Wailuku, Kahului, Kihei, Pukalani and Lahaina, said that “there’s a general level of concern” but that there hasn’t been an influx of patients asking about respiratory symptoms. Like their counterparts in South Maui, physicians at Maui Medical Group would evaluate any concerned patients by first asking whether they have been to China or associated with anyone with the coronavirus, and then decide whether they need further evaluation.

“It all starts out like a flu-like illness, and it may be relatively mild,” he said. “If it doesn’t get better, if it’s getting worse, they ought to see their physician.”

In a worst-case scenario where a patient came in with the virus, Mitchell said the clinic would follow the internal policies it already has in place for other communicable diseases.

“At the moment, we do have some areas where we can quarantine patients,” he said. “If we had somebody here who came in, we would put them in a room with nobody else in it, and we would keep the room isolated and do the best we could until some other solution was found.”

Mitchell said the person would likely be sent to the hospital. He added that Maui Medical Group has N95 masks stationed at “front line” areas where patients are received, as well as plenty in stock.

“To tell you the truth, we have those under lock and key,” Mitchell said.

Since the outbreak, face masks have been selling out at local stores. Ace Hardware said Tuesday that all of its locations were out of stock and that they were waiting for more shipments. Kepler also said that a lot of patients have been coming in to his clinic asking for masks, though “unfortunately we don’t have that available for general disbursement.”

Mitchell said he doesn’t want people to “overly worry” about the virus. It’s still far more likely they’ll get the flu, and the test for that is a quick and easy nasal swab that can be done in the office. If a patient needed a more serious blood or respiratory illness test, they would likely be sent to the hospital.

“People do get worried about it, but it’s too soon to know more than we know,” Mitchell said.

The Novel Coronavirus SARS-CoV-2 (yellow) is shown emerging from the surface of cells (blue/pink) cultured in the lab this month. Also known as 2019-nCoV, the virus causes COVID-19. NIAID-RML photo via AP

The Sabers’ Andrew Teruya pulls into second base with a double in the fourth inning.

Maui High’s Kory Shirota follows through on a third-inning single.

The Maui County Boy Scout office is located on Liholiho Street in Wailuku. This photo was taken Thursday. Officials with the Aloha Council, of which Maui County is a part, said the Chapter 11 filing by the national organization will not affect local packs and troops. The Maui News / MATTHEW THAYER photo