Haleakala reopens but power service still out at summit 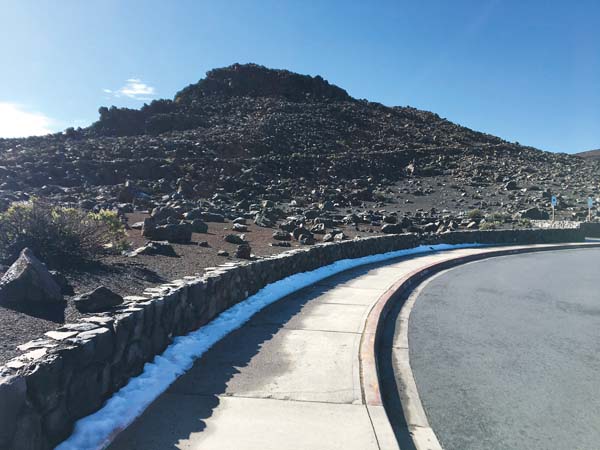 There still was a line of snow along a sidewalk at the summit of Haleakala on Wednesday. The Summit District of the national park reopened Wednesday after being closed for two days due to hazardous conditions caused by wintry weather. National Park Service / JAMIE MANSFIELD photo

Haleakala National Park reopened around noon Wednesday, but power remained out at the summit.

So far, crews have found two poles and several spans of power lines down due to icy and windy conditions, Decker said. She could not give a timeline for power restoration Wednesday because the damage assessment was not finished.

“Once the full damage assessment is completed, we will have a restoration plan with estimated restoration timelines to the affected customers this week,” she said, adding that the utility is working to obtain various permits needed for restoration efforts to begin.

“We’ve been working directly with the 47 commercial customers affected by the outage and appreciate their continued patience and understanding,” she said.

Power has been out at the summit since Monday afternoon. At around 12:20 p.m., 47 customers at the Haleakala summit experienced an outage when stormy conditions tripped a lightning arrestor. Power was restored to all customers by 1:50 p.m.

But later in the afternoon, there was another power outage. Weather conditions have hampered the utility’s efforts to assess the damage by air.

A much larger snow and ice storm last year in February atop Haleakala left customers without power for about a month. That repair job involved restringing a mile of transmission and distribution lines, replacing and repairing equipment on 60 poles and replacing 22 poles in rugged terrain and altitude.

Although there was no power in the Summit District, Haleakala National Park reopened at about 11 a.m. Wednesday after being closed for two days due to hazardous road conditions caused by wintry weather. The National Park Service advised visitors to expect reduced services due to the outages.

Sunrise viewing, which was canceled on Tuesday and Wednesday due to dangerous road conditions, will go on today.

The park service warned hikers that while conditions are warming, temperatures at the summit can range between 30 and 65 degrees and can reach freezing at any time when factoring in wind chill. Hypothermia is a risk for hikers, who need to be prepared for high altitudes and cold and rainy conditions.

Winter conditions with snow, ice and freezing rain have enveloped the Haleakala summit since last Thursday. Conditions are warming with high temperatures of 49 to 66 degrees and overnight lows of 40 degrees today. Mostly sunny and windy conditions, 10 to 25 mph with gusts up to 45 mph, are forecast.

In other weather developments in Maui County, a high-surf advisory for east-facing shores of Maui and Molokai is up until 6 a.m. Friday.

Increasing trades and a brief period of short to moderate easterly wind and waves will result in surf above 8 feet through today. Surf could drop below advisory levels Friday but will remain elevated through the weekend, the weather service said.

A small craft advisory has been posted until 6 a.m. Friday for Maui County windward waters, the Kaiwi Channel between Molokai and Oahu and the Alenuihaha Channel between Maui and Hawaii island.

The forecast for today for Maui’s central valley is mostly sunny with isolated showers and a 20 percent chance of rain. Northeasterly winds are expected to blow 15 mph.

High temperatures will be around 81 degrees with overnight lows around 67 degrees.