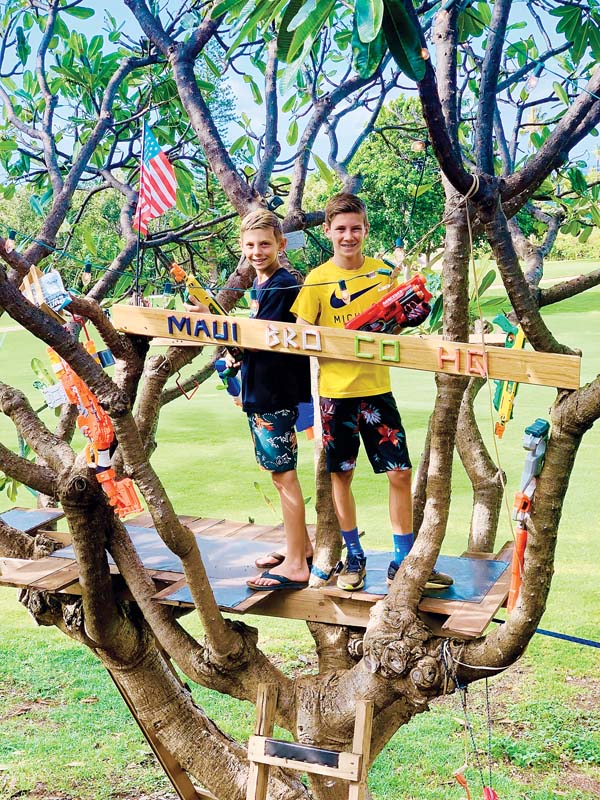 Ryder and Jack Leone stand in their new treehouse built while the family was in self-quarantine. The sign “Maui Bro Co HQ” is made of Nerf bullets. Photo courtesy of Leone family

After their spring break ski trip to Colorado was cut short by coronavirus closures last week, a Kaanapali family was counting its blessings in the midst of a 14-day self-quarantine.

“We were super glad to get home,” Michael Leone said by telephone Monday. “We feel 100 percent healthy. We have seven more days to ride this out and make sure.

“Life has changed in a matter of a week or two.”

While his wife, Angie, has worked from home, using Zoom web-based videoconferencing to run her Coconut Condos vacation rental company.

Michael Leone said his work as a real estate broker is flexible enough that he can take breaks to do activities with their sons, 12-year-old Jack and 9-year-old Ryder.

On Monday, about halfway through the family’s self-quarantine, father and sons had created a backyard treehouse and made lists of other projects and activities.

“We have taken some breaks and gone to the beach, kept our distance,” Michael Leone said. “For the most part, we’re at home. We’re keeping our distance from friends and family.

“We’re blessed. We have a great house, and we have a lot of fun things to do.”

Before the family left on the long-planned ski trip, Leone had been monitoring coronavirus developments. The day of their flight, a friend texted asking if Leone had heard the news about a group of Australian tourists, some who had left Colorado and some who were still there, who were being tested for coronavirus.

“We had to sit and make a decision. Do we go? Do we stay?” Leone said. “Everybody was excited to go. We didn’t know what the extent of the infections were.”

In Colorado, the family got in two days of skiing before Colorado Gov. Jared Polis closed the mountains, Leone said. He said the family spent the next day cross-country skiing before cutting short their planned 10-day trip after four days.

As they were preparing to leave the state, “we were told anybody leaving should self-quarantine,” Leone said.

The Centers for Disease Control and Prevention advised visitors to self-quarantine after “an extensive spread of coronavirus in mountain resort communities” of Colorado.

On the flight home from Los Angeles International Airport, the plane was less than half full, Leone said. “It seemed like a lot of families were cutting their spring break short and coming back to Maui,” he said.

There also were tourists on the flight.

Leone said he was a little concerned that no official was at the airport asking questions when they landed. But he said it sounded like the government and mayor now have been working quickly to try to stop the spread of COVID-19.

The Leones started their quarantine when they returned home the night of March 16, with Angie Leone using Instacart to arrange for groceries to be delivered from Safeway.

The next morning, he sat down with his sons, and they began making lists — of board games and sports equipment they had, movies they wanted to see and home projects, including improvements and cleanups.

When they took a break and walked outside to the family’s backyard bordering the golf course, the idea came for a treehouse.

“It just kind of snowballed from there,” Leone said.

Using materials from other projects, “we just started piecing it all together,” he said.

“In one day, we had a functioning treehouse we could all stand up in,” he said.

Jack helped design a pulley system to transport a cooler of snacks up and down. Tie downs from Leone’s surfboards secured the platform so they could “go across like a fort,” Leone said.

“We couldn’t go to the hardware store or anything, so we had to use what we had around the house,” he said.

One of Angie Leone’s Instagram posts shows the boys sitting in folding chairs in the treehouse and raising their drink cups in toasts.

The treehouse has drawn interest from passersby.

“Other neighborhood kids are eyeballing it as they’re walking by,” Leone said.

But visits will have to wait. “We can’t invite anybody over,” he said.

Some family routines have continued, including going to church Sunday through online services at Harvest at Kumulani Chapel.

“We were able to worship and pray,” Leone said.

Starting Wednesday, the boys were scheduled to return to school through distance-based learning at Maui Preparatory Academy.

While the family has missed not being able to interact closely with family and friends, there have been benefits that wouldn’t have happened without the quarantine, Leone said.

“I think we never would have built this treehouse,” he said. “We never would have had this awesome bonding time in our house. We’ve gotten a lot closer, and we’re enjoying what we have instead of what we would like to have or what we want.

“We’re being content with what we have, thankful for the blessings we have and thankful that we’re all healthy.”

While they’ve been having meals at home, Leone said they probably will order takeout from some restaurants that have been closed by coronavirus concerns.

“We definitely want to support our friends in the industry, but also keep a safe distance,” he said. “We’re praying for everybody that’s been infected, that this island, this nation and this whole world can survive this whole thing.”