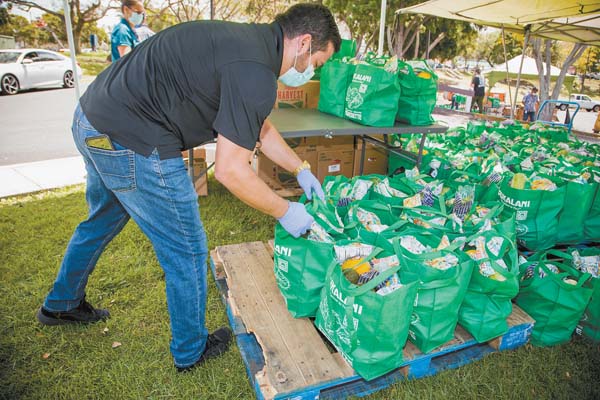 Two locally based technology companies, with the help of a Maui County grant, will be manufacturing 500 ventilators for the Valley Isle to assist with treating severely ill COVID-19 patients, said Maui County Mayor Michael Victorino at a news conference Monday.

He called it “some very good news” that “we can locally produce emergency ventilators.”

The Maui Economic Development Board and the two companies stepped forward. MEDB is administering the county’s $100,000 grant for the local production of ventilators.

Leslie Wilkins, president and CEO of MEDB, said Monday afternoon that a ventilator prototype could be ready as early as this afternoon with a Maui Memorial Medical Center official set to inspect the machine.

The ventilator project is part of a nationwide emergency collaboration; the design was developed at the University of Texas at Austin, according to the county.

O’Connell, whose company’s Maui-built biolab is circling the globe in the International Space Station, said Monday afternoon that his company is “in the process of retooling . . . to manufacture ventilators to support Hawaii’s needs.”

“We hope to make enough for all the island’s needs,” he said. “The grant will launch the initial startup effort.”

Wilkins said when the larger HNu ramps up production it will be in position to receive funding from the state to supply Hawaii with ventilators and help the national repository.

But first priority is Maui, she said.

“Thank you to these local companies — founded by our talented tech professionals on Maui — for their efforts and willingness to step up during this time of need,” said Wilkins in a news release.

In a phone interview, Wilkins said the program came together quickly with the two companies and national officials discussing the details on conference calls Sunday. The computer-aided designs came over to the Maui companies late Sunday afternoon, she added.

Green, a medical doctor, said during a news conference in Honolulu on Monday that Hawaii has 2,757 licensed hospital beds statewide, 338 ICU beds and 534 ventilators.

“We are using only 37 percent of our ICU beds. That’s very good news because that gives us some capacity to care for people if we get a surge,” Green said. “We are using 58 out of 534 ventilators right now. . . . That’s just 11 percent. That means we are keeping it down.

“However, if we do not quarantine at home, those numbers go up very fast and just 400 or 500 people needing a ventilator will exceed our capacity to keep people alive.”

The University of Hawaii already has started working with experts and engineers across the country to find ways of expanding ventilator capacity, he said. Researchers are working on ways to make various devices that are capable of splitting into four ventilators; that could give compressions; and that have special masks working like a CPAP machine providing oxygen.

“All of these technologies are happening in real time,” Green said. “We’re capable of beating this.”

Maui County registered five new cases of COVID-19 on Monday, bringing the county’s total to 25. The statewide total was up to 204 as of noon Monday, according to the state Department of Health.

Twenty-nine new cases were reported, including 16 in Honolulu County, three in Hawaii County and five with pending locations. Kauai did not have any new cases.

Currently, there are 139 cases on Oahu, 15 on Hawaii island and 12 on Kauai. Locations are pending in 11 cases and two Hawaii residents were diagnosed out of state. No deaths have been reported.

While the cases of the new coronavirus increased, Victorino addressed the devastating economic impacts and discussed the Hawaii Emergency Laulima Partnership, which was passed by the County Council and signed by him on Friday.

The program will assist those who have lost income due to the pandemic and will offer help to pay for essential needs, including food, rent, utilities and medicine.

To qualify, a person must have a 25 percent reduction in income after March 4 and have less than $5,000 in liquid assets. Assets do not include a person’s home, Victorino said.

Residents will be able to apply online or by phone. Victorino said Laulima will be launched this week with more details to come.

The mayor also mentioned a micro business zero-interest loan program for businesses with less than 10 employees. More details about this program will be announced later this week, Victorino said.

In his wide ranging news conference, the mayor also spoke about the produce giveaway that the county, Pukalani Superette and Sysco Hawaii collaborated on.

“I understand there was kind of a big traffic jam,” Victorino said of the produce pick-up site at the Upcountry Pool on Monday.

He said 300 free bags of produce were given out in a little over an hour. On its Facebook page, Pukalani Superette gave kudos to Mahi Pono and Kumu Farms for their donations, as well as to a “woman in Kula” who brought avocados.

Victorino said there will be other food distributions and sought others “willing to step up to the plate.” They can call 270-7855 to help set up another giveaway.

Help for Maui County residents is on the way from the federal government, members of Hawaii’s congressional delegation announced Monday.

And Sunday, Schatz announced that homeowners with a government-backed mortgage are eligible for a temporary postponement of mortgage payments. This will be for up to one year, without fees, penalties or additional interest.

Renters on properties with federally-guaranteed loans or participating in federal housing programs are protected from eviction and fees for unpaid rent until July 26.