With classes still virtual, app keeps students up to date with school, each other 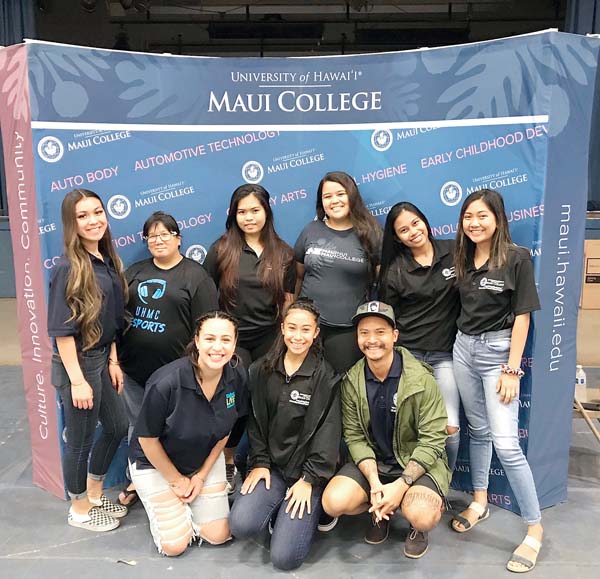 An idea that was born before the coronavirus pandemic is now coming in handy as a way for one college community to stay in touch.

The University of Hawaii-Maui College student body government introduced a cellphone app last week that has started to catch fire among the school’s nearly 3,000 students, with more than 200 downloads right off the bat.

On Friday, the student government launched its first “UH Maui Mashup” video on the school’s YouTube channel of the same name as a way to further connect with students. The video can be accessed via the app, which is available on the App Store and Google Play.

“We initially wanted to bring the mobile app to campus prior to the pandemic,” UH-MC Director of Student Life Al Paschoal said Wednesday. “They were very motivated in getting things rolling. At this point, we were trying to combat communication in silos basically.

“So if there was one universal spot that the students could go to not only get information, but also to interact with each other, we thought that would be the most beneficial direction to head. So, I think that’s what started it all.”

When the pandemic hit, the app with the video linked to it appeared to be a perfect way to interact in what has become a virtual world, even to the student body at UH-MC.

“Once we realized how and what an important tool it could be in these trying times, I think we really put the foot on the gas pedal,” Paschoal said.

The app holds the entire campus guidebook in virtual reality.

“You have the ability now to sit down and basically look through the entire campus and what we have to offer in the palm of your hand in the comfort of your own home,” Paschoal said. “And then to communicate on the medium that you’re comfortable with is the big deal, I think.”

Student Senator Breannalye Rodrigues also works for Paschoal, her former volleyball coach at King Kekaulike High School, in the student life office. Rodrigues said that these days, people talk through apps like Instagram and Facebook, and so having an app for the school is a way to “get the most efficient communication from the millennials.”

“I think the main thing for students, especially in today’s age, is trying to connect with them in a way that is easier for them and in a way that they feel most comfortable,” Rodrigues said. “With the way that social media has really taken over in today’s society, I think that making an app and having them see that they can virtually connect with each other, it’s really important because that’s how we communicate today.”

“All of the world for the past couple years — like Bree was saying — is all interconnected,” Peralta said. “So, if we’re not on the app we’re kind of just left behind. I know for Maui we’re a pretty hybrid community, so I think we’re actually late in jumping on the app.”

Peralta said that the term “social distancing” is misleading and that it should actually be “physical distancing,” pointing out that people can still stay in touch while keeping their distance during the pandemic.

He noted that Rodrigues has been posting pictures of her 5 1/2-month-old daughter Kahanu, another student government officer has been posting about her pregnancy process and the school’s e-sports team has been communicating through the app as well.

“It’s really fun,” Peralta said. “I really do feel more connected with our student body. . . . I feel way more of that family feel.”

Paschoal said as the use of the app grows, he wants UH-MC’s 30 student clubs to jump on board.

With the app, “you’re completely integrated to the college,” Paschoal said. “Every single department that is on campus that can help you.”

Students also can connect to their schedule or even to UH-MC’s emergency student COVID-19 relief fund for those who need help with things like paying rent or their phone bill.

There is even a “campus wall” where students can post pictures, videos and thoughts.

“It’s our version of Facebook,” Paschoal said. “Everyone that has the app has the ability to communicate with every other person who has the app. There are many, many intricacies with it. We’re building, and we’re learning how to fine tune its uses.”

Rodrigues emphasized connecting to the school’s clubs and said the app is a good way for students to take a break from classes.

“This is a good way to separate their socializing and their classroom experience because college isn’t all about being in a classroom — it’s about sharing your experiences,” Rodrigues said.

“Sometimes, you make lifelong friends in college. And right now, it might be really hard to do that, but with the app they can make friends virtually, and whenever we get out of this they can meet up and there will be so many new relationships — that’s the hopes for the app.”

Paschoal said the app and the video, which will be a weekly occurrence, will provide another avenue for the students besides just going to the school’s website.

“We’re hopefully going to bridge that gap, honestly,” Paschoal said. “Email is something that you hate to say is dead, but it’s definitely not the primary source of communication between our students now.”

Paschoal said today’s video is “sort of like a podcast, a video-cast,” and that the app will notify users when it’s live or ready to go.

“It’s pretty exciting,” Peralta said. “Of course, we want to stay relevant, so of course, we have updates for the students about what’s going on on campus, we have some interviews, one with our chancellor. Bree did a great interview. Another part of the video is a cultural aspect, some fun videos, a fun meme, cute thing of the day.”

* Robert Collias can be reached at rcollias@mauinews.com.

The 91 degree high Thursday at Kahului Airport tied the record for the day — the third straight day of ...