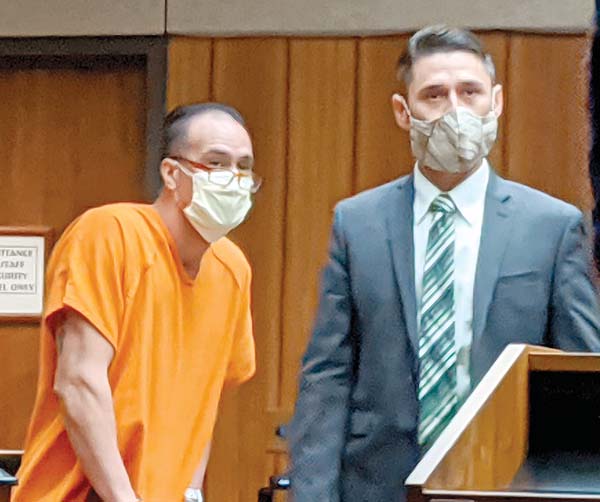 WAILUKU — Saying the community needed to be protected, a judge Wednesday ordered prison terms totaling six years for a man found guilty of abusing his then-girlfriend and threatening her with a loaded handgun.

Raymond Naki Jr., 45, was ordered to serve all five years of the prison term for first-degree terroristic threatening, based on a 2nd Circuit Court jury’s finding that he possessed, used or threatened to use a semiautomatic firearm in threatening the victim.

When Naki pointed the gun in her face, “the victim thought she was going to die,” said Deputy Prosecutor Brandon Segal.

“And the trauma of that experience will last with her for a very long time,” he said.

During a trial in February, the jury found Naki guilty of first-degree terroristic threatening and abuse.

After a barbecue at their residence in Makawao, the couple got into an argument Oct. 13 over table scraps that Naki fed to one of their dogs, according to testimony at the trial.

“He punched, beat, bruised and attacked the victim without any justification or excuse,” Segal said. “And he did this to someone who trusted him.”

Jurors were shown video from a petcam in the home that captured portions of the attack.

“He refuses to take responsibility. And that is probably the most concerning and troubling part of this case. This is driven by pure anger and disrespect for his partner. It’s scary.”

Segal said the most telling part of what happened is how Naki grabbed the gun that was hidden in a couch and loaded it away from the victim while she was in the kitchen.

“If he really wanted to just threaten her and scare her, he would have loaded that gun in front of her,” Segal said. “He was acting so quickly and so hastily, he loaded it off camera, put the bullet in the chamber for a specific reason.”

Naki, who is from Molokai, doesn’t have a prior record and had a business transporting dead bodies, said Deputy Public Defender Tyler Stevenson.

He said Naki and the victim had been in a relationship for a few years. “There’s nothing in those years they spent together that gave her any indication this was a possibility,” Stevenson said. “This was an anomaly.”

He said other defendants who have threatened someone with a semiautomatic weapon haven’t received mandatory minimum sentences like the one the prosecution sought for Naki.

Judge Rhonda Loo said she couldn’t think of any such defendants who had gone to trial in a similar case.

Speaking in court, Naki said he had apologized.

“I haven’t received any forgiveness from the initial incident, which I was very sorry for,” he said. “I’m still apologetic to this day for all the pain, the heartache, the headaches I have caused.”

In arguing for consecutive and mandatory minimum sentencing, Segal said it would “send a strong message to the offender that violence in the home simply cannot be tolerated within our community.”

Judge Loo, who presided over the trial, said she watched jurors as a petcam video clip showed Naki “delivering brutal blows” to the victim’s face.

“I think the jury cringed,” Loo said, when they saw the victim being slammed against a wall and falling.

Jurors also heard “the most blood-curdling sound” coming from the victim, Loo said. “They were shaking in their seats, they were cringing at that scream that came out of her mouth,” Loo said. “Everyone felt the terror she was going through.”

The gun was loaded with six rounds, including one bullet racked in the chamber, according to police.

“But for a bullet jamming, who knows what would have happened,” Loo said.

She said Naki’s actions afterward, as the victim was calling 911, also were telling. Video showed him trying to calm her down and telling her to change her clothes because her shirt was ripped.

In a report prepared for his sentencing, Naki said he wanted to reunite with the victim and referred to her as his “sweetie,” Loo noted.

“Your actions are clear to the court, that you meant to terrorize her into submission with this firearm,” she told Naki. “When you treat people in this horrible fashion, you give the court no option. The court has to protect the public.”

According to trial testimony, Naki hadn’t been drinking much that night.