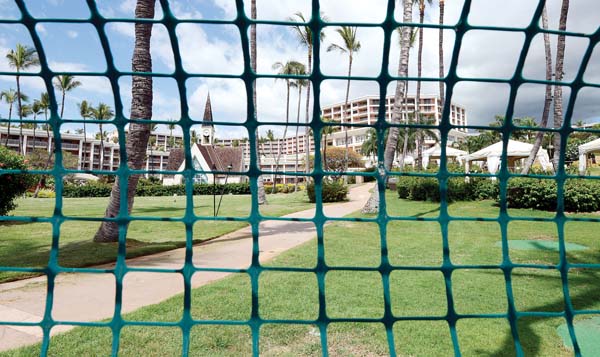 It’s all quiet and wrapped up at the Grand Wailea in this photo from earlier in the month. May offered another bleak period for Maui County hotels and vacation rentals with only 12.6 percent and 7.2 percent occupancy, respectively, with the tourism industry shut down due to COVID-19. — The Maui News / MATTHEW THAYER photo

May offered another bleak month for Maui County hotels and vacation rentals with only 12.6 percent and 7.2 percent occupancy, respectively, with the tourism industry shut down due to COVID-19.

The Wailea region with major hotels shuttered was not included in the hotel report. It is usually the highest revenue and occupancy region in Hawaii. Many hotels closed or reduced operations in late March; all passengers arriving in Hawaii since March 26 have had to quarantine for two weeks. The quarantine was expanded to interisland travel April 1.

Gov. David Ige has been slowly opening up the state, allowing interisland travel without quarantine on June 16 and announcing Wednesday the lifting of quarantine on transpacific travelers who get tested.

Vacation rentals were deemed nonessential and not allowed to operate under emergency orders initially issued in late March. But on June 16, those properties in Maui County were allowed to house guests who were not subject to the travel quarantine.

The Maui County unit supply for May was down 62.9 percent compared to a year earlier. Unit demand was down 96.5 percent leading to 7.2 percent occupancy, which was down 68.9 percentage points. Average daily rate was $243, down 38.7 percent.

The report noted that unlike hotels, condos and timeshares, vacation rental units are not necessarily available year- round and often accommodate larger numbers of guests than traditional hotel rooms.

A vacation rental is defined as a rental house, condo unit, private room in a private home or shared room/space in a private house. The report does not differentiate between permitted and unpermitted units.