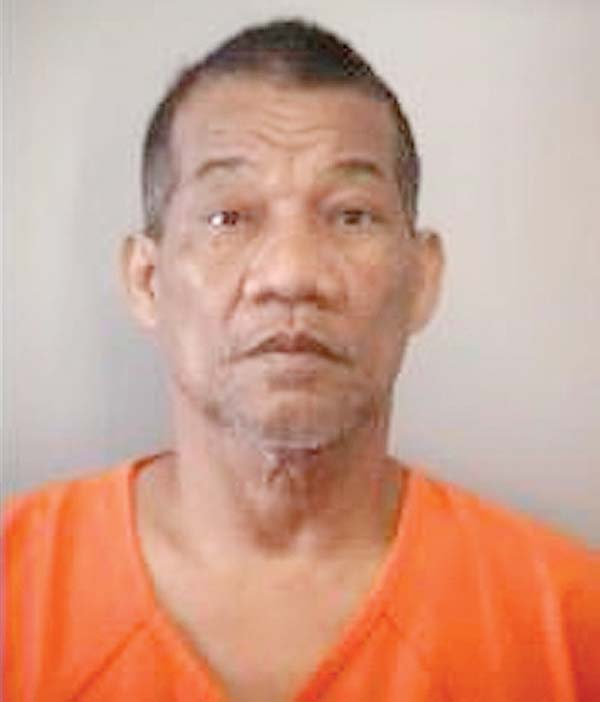 WAILUKU — A woman’s cries were becoming louder when a bystander said he kicked open a bedroom door to find a man with a steak knife standing over his wife.

“He was holding the knife in his hand in the motion of going for a second stab” while the woman was lying on her right side on the floor and crying, Keoni Welson said. “She had her hands up trying to block her face.”

Welson testified Wednesday at a preliminary hearing in Lahaina District Court convening in Wailuku for Kejet Jibon, 56, of Lahaina, who is facing charges including second-degree attempted murder.

At about 5:30 p.m. May 27, Welson said he was in the garage at 1267 Nahale Place and was loading a barbecue grill into the back of a pickup truck when he heard a man yelling. He ignored it at first, then heard someone punching someone else, Welson said.

“Then the lady started crying, and then the crying got louder and louder,” he said. “And that’s when she started to call for help.”

When he asked a resident standing outside the door what happened, he replied he didn’t know and “all he knows is she’s going to be killed pretty soon,” Welson said.

“I just had to kick the door open,” he said. “I just ran straight to him, tackled him down to the bed.”

Welson said he had to pinch Jibon’s wrist to get him to let go of the knife. “I asked him what happened, why is he doing that,” Welson said. “All he said is ‘My wife is making me crazy.’ ”

“She was bleeding on her thigh,” he said.

Johnny said he tried to calm down Jibon. “I asked him why did he do that,” Johnny said. “His response was because his wife is having an affair with somebody.”

Johnny said the couple had been living on the property for a couple of months.

Lahaina patrol officer Kunal Chopra testified he arrived at the residence and helped another officer who was speaking with the victim.

“She was pretty dazed and confused,” he said. “She was quite injured. She mainly responded to me with grunts and moans.”

He said the woman, who was lying back in a lawn chair, had bruising and swelling on her face and around her eyes, which were red and bloodshot. Her left forearm was heavily bruised, and she had a half-inch laceration on the left side of her left thigh, Chopra said. The wound was shallow and wasn’t bleeding, he said.

He said her injuries seemed to worsen as officers talked with the woman, with some of the bruising on her face turning purple and her eyes becoming more red.

“It was getting pretty apparent that the blood vessels had burst,” he said. “There was some hemorrhaging going on in her eyes.”

Police said the 46-year-old woman was transported to Maui Memorial Medical Center to be treated for injuries that weren’t life threatening.

He said Jibon reported that an argument between him and his wife progressed to a fistfight. Jibon said that “sometime during the fistfight, he got angry, picked up a knife that was in the room that he uses to eat with and began stabbing at his wife,” Matsuura said.

When Lt. Garret Tihada asked if Jibon understood that the stabbing could have caused her to be seriously injured or killed, “he said he understood,” Matsuura said.

He said Jibon had an injury on his right knuckle.

Deputy Prosecutor Carson Tani said the evidence supported the attempted murder charge “if you take the totality of the circumstances — the fact that the defendant was punching, was angry, thought his wife had an affair, lost control and stabbed his wife in the leg and admitted he had tried to stab her.”

“He did take a substantial step in trying to kill his wife,” Tani said.

Deputy Public Defender Ben Lowenthal said that while the evidence might support the other charges of second-degree assault, first-degree terroristic threatening and abuse, there wasn’t probable cause for the attempted murder charge. He said the half-inch cut to the woman’s thigh was so small that “you can cover the injury with a dime.”

Referring to Welson’s testimony that Jibon was standing while making thrusting motions at his wife on the ground, Lowenthal said that in that position, “You’re not coming close to making contact.”

Judge Kirstin Hamman found there was probable cause for the attempted murder charge based on the witnesses’ testimony.

Jibon is being held in lieu of $500,000 bail at the Maui Community Correctional Center, pending his arraignment June 17 in 2nd Circuit Court.