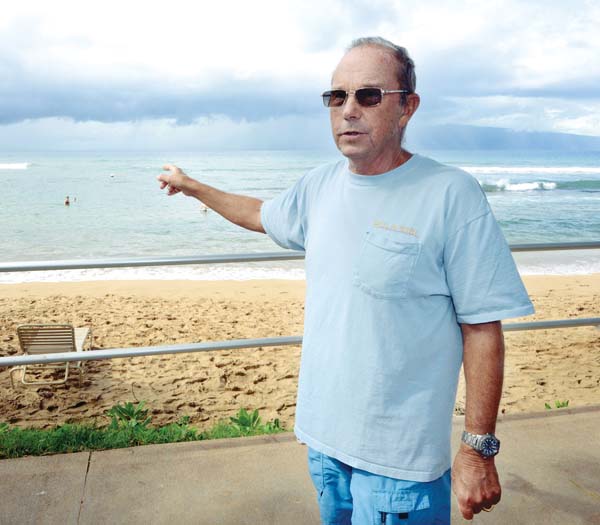 Don McLeish points to Honokowai Point, where he has saved many swimmers from the dangerous rip current. He’s towed more than 100 people out of the rip current since 2009, likely saving their lives. The Maui News / MATTHEW THAYER photo

Seven years ago, Don McLeish was on a mission to photograph some sea horses.

“Underwater photography is a hobby,” he said. “I’ve taken thousands of photos of sea critters.”

Sea horses are hard to find in Hawaiian waters, but a friend tipped him off: A sea horse had been spotted at Honokowai Point. So, McLeish grabbed his underwater camera and headed to the point. There, he discovered the elusive creature frolicking on the shallow reef. He also took notice of the uncongested waves and reef break nearby.

“It was ideal for riding my Waveski,” he said. “I’ve been riding waves here almost every day since.”

But something else caught his attention that day: a rip current flowing near a trio of moored buoys just a few yards away. A rip current is a powerful, narrow channel of fast-moving water that can flow at speeds of up to 8 feet per second, according to the National Oceanic and Atmospheric Administration. It’s a force to be reckoned with — some rip currents can outpace an Olympic swimmer. Inexperienced swimmers who are swept into a rip current often try to make a beeline back to shore; many of them succumb to fatigue and drown.

McLeish, who has been surfing since he was a kid, knows how to safely maneuver out of a rip current.

“In general, one should not fight the rip by swimming against it and often swimming perpendicular to its flow direction will get you out of it rather quickly,” he said.

Not long after he started surfing at Honokowai Point, McLeish made his first rescue.

“A man was hanging on the buoy, waving his arms, yelling ‘help me,’ ” he said. “I took him to shore on my Waveski.”

It would be the first of many rescues; McLeish has towed more than 100 people out of the rip current since 2009. And he’s not alone: There are several good Samaritan surfers who have come to the aid of panicked swimmers clinging to the buoys and signaling for help.

The closest lifeguard is stationed nearly 20 minutes away from the buoys, and despite signage warning beachgoers of the dangerous conditions, close calls are a fairly regular occurrence.

McLeish has likely prevented an untold number of incidents by unabashedly approaching people on the beach and telling them about the rip current. Most of the time, they heed his warning. Even so, McLeish comes to the beach prepared.

“I have a spool of line and a float in my car that I have used a couple of times,” he said.

Two years ago, McLeish reached his physical limit. “I’m not getting any younger,” he said. “It was getting harder for me to tow people to shore.”

So, he went to his computer and composed a mass email expressing his concerns. Among other things, he noted the staggering number of people who had been rescued by private citizens, which eliminated the need to call 911.

“I don’t think people were aware of how serious the problem was,” McLeish said.

That email eventually landed in the inbox of Maui Fire Department Battalion Chief of Ocean Safety Colin Yamamoto, who promptly called McLeish. “Colin has been very proactive,” McLeish said. “He’s really gone above and beyond to address the situation.”

When a storm and high tide washed away the signage fronting the beach path last winter, McLeish alerted Yamamoto; they are currently working with the Department of Land and Natural Resources, Kaanapali Beach Club and marine educator Liz Foote to replace the signs. The two men are also involved in an effort to educate beachgoers about ocean safety and proper coral reef etiquette.

In August, Yamamoto asked McLeish to speak at the annual Hawaii Ocean Safety and Drowning Prevention Conference in Kaanapali. There, he told an audience about the dire situation at Honokowai, pointing out the need for more and improved education and prevention efforts.

“I will be a voice for this issue as long as I’m needed,” he said.

The most ideal solution, McLeish said, is to post a lifeguard at the beach or assign a roving lifeguard to routinely patrol the area. “I hope to see that happen someday soon,” he said.

Until then, McLeish will continue to keep a watchful eye at Honokowai Point.

“If I see someone in distress, I paddle over and give them floatation and companionship until help arrives,” he said. “If someone needs help, you’re not going to turn your back on them.”

And if he sees beachgoers heading into the surf with inner tubes or boogie boards, he won’t hesitate to stop them in their tracks.

“You have to be proactive,” he said. “That’s how you can save a life.”