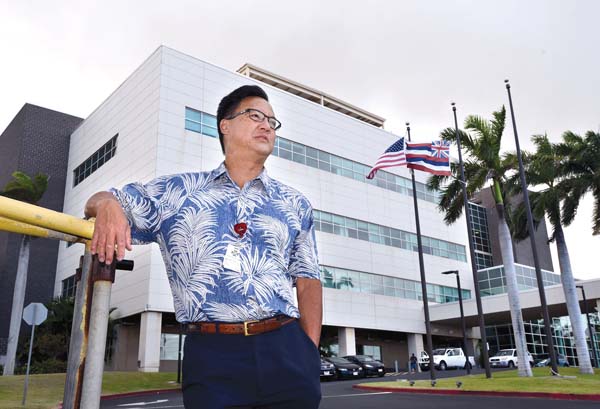 Wesley Lo, the former chief executive officer of the quasi-public entity that runs Maui Memorial Medical Center, led efforts to improve the Wailuku hospital, including the construction of the wing in the background. He also led the difficult battle to create a public-private partnership with Kaiser Permanente to operate Maui Memorial, Kula Hospital and Lanai Community Hospital. The Maui News / MATTHEW THAYER photo

When he was the chief executive officer of Hawaii Health Systems Corp. Maui Region, Wesley Lo found a way to turn a bad day around: He’d observe an open-heart surgery.

“It kept me connected to what was happening at the hospital,” he said. “It was also a reminder of why I did my job.”

Twelve years ago, Lo took the helm of Maui Memorial Medical Center. Managing a hospital is something his younger self never would have imagined, Lo said.

“Not a chance,” he laughed. Lo, who earned a degree in finance from the University of Colorado, thought he’d be a numbers guy for life.

After college, Lo returned to his hometown of Honolulu and landed a job at First Hawaiian Bank, and in 1990, moved to Maui to open the bank’s Wailuku and Kahului branches.

“I thought I’d be on Maui temporarily,” he said. “But then I realized this is where I wanted to be.”

Lo left the banking industry in 1998 to work under then-Mayor James “Kimo” Apana as the county’s Department of Finance director. Then, in 2002, Lo entered uncharted territory when he became the chief financial officer of Maui Radiology Consultants.

“It was my first exposure to the health care field,” he said. “I knew nothing about medicine, the human body, any of it, until I took that job.”

Clearly, it was a good fit. A year later, Lo was hired as the CFO of MMMC, and in rapid succession, became the interim CEO, and then the CEO in 2004. Soon, he found himself doing more than crunching numbers.

“It was a steep learning curve,” he said. “But I was so fortunate to be around people who could help me understand it all. There’s something truly incredible about people who work in the health care field — I learned that right away.”

That’s when Lo dove headfirst into what he calls “the grand experiment.” He set out to improve Maui County’s health care delivery system. “I had a tremendous opportunity to do something good, to do the right thing,” he said.

During his tenure, he oversaw several major improvements, including the construction of a four-story wing, the addition of a helipad, the creation of regional boards and a significant increase in hospital revenue. In 2007, under his leadership, Maui Memorial Medical Center opened its state-of-the-art Heart, Brain & Vascular Center.

“The doctors and the community wanted it, and I was convinced of it, so we took a chance and made it happen,” Lo said.

“I watched the first open-heart surgery and first coronary angioplasty at the hospital,” Lo said. “It changed my life.”

Most recently, Lo was a driving force in facilitating the pending transfer of Maui County’s public hospitals to Maui Health System, a subsidiary of Kaiser Permanente. It was a grueling, often frustrating, several-year process that involved garnering public support and lobbying the Legislature to get the public-private partnership passed as a way to provide a firmer financial footing for the hospital that was bleeding millions of dollars a year.

The transfer, initially set to occur on July 1 of this year, was put off a year to July 1 next year over a labor union lawsuit and a dispute over transition benefits for state workers moving to the private Kaiser.

As CEO, Lo listened with an open mind and an open heart.

“That’s how all of us can contribute,” he said. “You have to listen to your heart and the people around you.”

Lo attributes his successes to those he’s worked with over the years.

“The community has been wonderful to me,” he said. “All of this has been a community effort.”

It hasn’t always been easy, though.

“I’ve had to make some tough decisions and some unpopular decisions, too,” he said. “It was daunting at times, but I was resilient and stayed the course, because it was the right thing to do.”

Last month, before he could witness the fruits of his work with the public-private partnership, Lo stepped into his new role as CEO of Hale Makua Health Services and said he’s looking forward to charting the future of the organization.

“I’m coming in at a really good time,” he said. “I’m really excited about the prospects. I’m very happy to still be in the health care field.”

Looking back on his career, Lo says it was all pure luck; he was simply in the right place at the right time.

“Sometimes you facilitate the natural progression of things,” he said.

But those who have benefitted from Lo’s visionary leadership might argue otherwise — they’d likely say he did the right thing at the right time.

Lo says he’s seen Maui’s health care delivery system flourish over the past 13 years, and he’s hopeful the trend will continue in the years to come.

“If we break down barriers and work together, Maui will have a one-of-a-kind health care system,” he said. “I think it will happen . . . and we will be the envy of a lot of places.”