For the home team 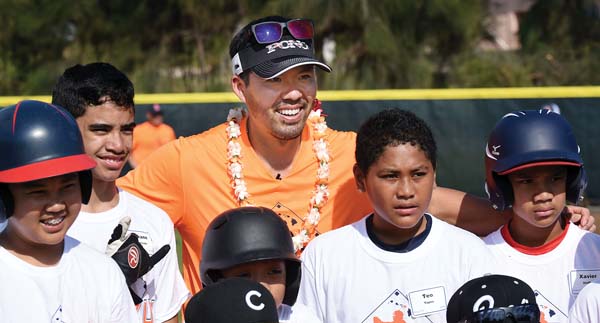 Maui-born major league baseball star Kurt Suzuki poses for a photo with participants in the All Pono Clinic that took place in January at Maehara Stadium in Wailuku. Suzuki and his wife, Renee, created the Kurt Suzuki Family Foundation, a 501(c)(3) nonprofit organization that aims to improve the lives of Hawaii residents by supporting medical research and promoting healthy lifestyle choices. The Maui News / MATTHEW THAYER photo

Kurt Suzuki may have made it to the big leagues but Maui is never far from his mind.

The Atlanta Braves catcher and Baldwin High School graduate has resided on the Mainland since 2004 but hasn’t let the distance keep him from making a difference in his hometown.

“I was born and raised on Maui; my family and friends are there. Every time I come back, it feels like I never left,” he said. “Maui will always be ‘home’ to me.”

That’s why Suzuki and his wife, Renee, created the Kurt Suzuki Family Foundation, a 501(c)(3) nonprofit organization that aims to improve the lives of Hawaii residents by supporting medical research and promoting healthy lifestyle choices.

One of the foundation’s signature events is the annual Kurt Suzuki/All Pono Baseball Clinic for kids ages 8 to 12. In 2012, the Major League Baseball All-Star teamed up with his friend and former high school baseball coach Jon Viela to launch the free skills clinic, which takes place every January at the Iron Maehara Stadium in Wailuku. Viela is the founder of the All Pono organization, a nonprofit that emphasizes “pono” values through athletics and community service programs.

“Coach Viela had a big impact on my playing career,” Suzuki explained. “I am grateful for everything he’s done for me. This was one way to show my appreciation to him — and to the community, which has given me so much support over the years.”

The clinic is obviously a big hit: Registration is limited to 150 players — and the slots are usually filled within 48 hours. The foundation pays for youngsters from Molokai and Lanai to attend. Suzuki has returned to Maui to lead the clinic every year since its inception and says it’s an intensely rewarding experience.

“Seeing the kids running around with big smiles on their faces — that never gets old,” he said. “It’s priceless.”

Two years after he started the clinic, Suzuki’s phone rang. Hawaii chef and restaurateur Alan Wong wanted to know if he’d be interested in co-hosting a culinary-themed fundraising gala to benefit the Kurt Suzuki Family Foundation. Suzuki agreed without hesitation.

“I had a world-renowned chef asking me to partner with him to do something good for the community,” he recalled. “I jumped at the opportunity.”

Now in its fourth year, Wong and Suzuki’s “A Taste of Hawaii” — which features a stellar roster of acclaimed chefs and professional athletes — has raised funds for the National Kidney Foundation and Kapiolani Medical Center for Women and Children’s Pediatric Cancer Division. For Suzuki, it’s more than an opportunity to support two important beneficiaries — it’s also personal. His father, Warren, is a stage 4 kidney cancer survivor, and Renee’s sister, Tricia, has been bravely battling a rare kidney disorder since the age of 9. Both are now in remission.

Last year, Suzuki met 3-year-old Trucker Dukes, who had been diagnosed with stage 4 neuroblastoma — a rare and aggressive pediatric cancer — at 19 months old. Before long, Suzuki was rallying his fellow major league players to take part in “The Trucker Tough Challenge,” a social media campaign that encouraged people to post photos of their “toughest face” accompanied by a shaka. Selfies began to pour in; there were so many that Suzuki decided to make a video collage (the “Trucker Tough Challenge-MLB edition” is now on YouTube).

“We did it to make him smile and to remind him that he was a hero and an inspiration to us,” he said.

Like so many others, Suzuki — who, along with his wife and three young children, had grown close to the Dukes family — was heartbroken when Trucker died in March. A few months after Trucker’s death, Suzuki hosted the Dukes family in Atlanta, where they attended a Braves game.

“They are one of the toughest families I’ve ever met,” he said. “I’m proud to call them my friends.”

Suzuki is committed to raising awareness of pediatric cancer and says he carries Trucker’s memory with him every day.

“I feel very fortunate and blessed to have met him,” he said. “Trucker made me a better person. He made all of us who knew him better people.”

Clearly, Suzuki is a role model — both on and off of the baseball field. He is an 11-year major league veteran who smacked a career-high 19 home runs this past season in 81 games for the Braves. Over the summer, he signed another one-year contract with the Braves for 2018 and has previously played for Oakland, Washington and Minnesota. His lifetime batting average is .257, and he was an American League All-Star for the Minnesota Twins in 2014.

Through his foundation, he says he will continue to give back to the place that gave him so much.

“It feels good to know that I’m making a difference,” he said. “And it’s something we can all do. It doesn’t take a huge donation; sometimes just saying ‘Hi’ to someone can make a big difference. There are so many things we can do, big or small, that will affect people’s lives in positive ways. If everyone took that approach, I believe the world would be a better place.”