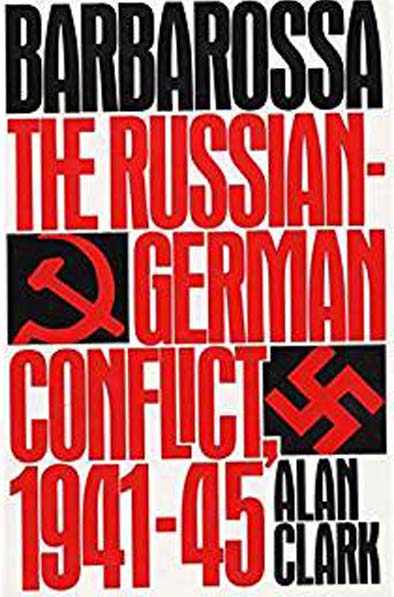 Almost all Americans share a belief that our fathers and grandfathers fought a “good war” that eliminated fascism. It is a false belief as regards European fascism but half-true for Asia, where we defeated the fascists in Japan but supported them in China, and, later, in Vietnam, the Philippines, Indonesia and elsewhere.

Even professional historians in America write about America’s role in the European war as if it determined something. English historians have a clearer view of the matter: They say the outcome was determined before the Americans got involved.

Alan Clark writes in his introduction: “It does seem that the Russians could have won the war on their own, or at least fought the Germans to a standstill.”

The “seem” is odd, since his book demonstrates not only that the Russians might but that they did.

The proof came in December 1941, when the Red Army counterattacked, but the decisive moment came earlier. Exactly when is a matter for interpretation, but Clark in “Barbarossa” puts it earlier than other historians; he sets it during July-August 1941, when the German blitzkrieg paused after astonishing advances and Hitler and his generals dithered about what path to follow next.

The choices were to press on and capture Moscow or turn south to engross the grain of south Russia and the oil of the Caucasus. For 19 dry, sunny days, the German army stopped its assault.

It would have had to pause for a time anyway, as the advance had gone so far, so fast that supplies had to be brought up and units had to repair and refresh. That did not require 19 days.

Although from time to time Clark pauses to elaborate on an individual experience of the biggest war ever, “Barbarossa” is history from 30,000 feet. It does not even sketch the month-by-month or even operation by operation history but instead considers three central events: the initial onslaught on a front of 2,000 miles, which petered out in the suburbs of Moscow as the winter closed in; the second year’s drive for grain and oil, which ended in the surrender of a whole army at Stalingrad; and the third year’s opening battle, the tank encounter at Kursk.

Each of these great encounters was won by the Red Army, which may surprise American readers used to a history of the war as a succession of enormous Russian defeats.

Indeed, the Russians lost battles in spectacular fashion, but never a campaign. And even as they wound up campaigns with powerful advantages, after Moscow and Stalingrad they stupidly threw away many gains by attempting to turn a campaign victory into a war-ending smash. They did not make that mistake after Kursk.

Clark’s book is more than 50 years old; it was written before much archival material became available for the Russian side, but Clark was more interested in the thinking of the Germans. It was, in his view, theirs to throw way success, which they did.

Indeed, it can be argued that Clark sets his date for the decisive event too late. Wars between industrial states are always wars of attrition (because the defensive power of a modern state is so vast). Germany with a population of about 80 million was sure to lose in a war against the USSR with almost 200 million.

Also, the chance that Germany could win a two-front war of attrition was nil.

Just as the Germans thought they could finesse those circumstances in 1914, they (or rather, he, Hitler) thought to do so in 1941.

With all the productive capacity of Europe, and much of its manpower as well, the Germans could balance the population and resources of Russia.

But, in reality, such thoughts were just map exercises. Neither Hitler nor his generals expected the Soviets to put up a fight. This was expressed openly and, more tellingly, logistically: the German army made no provisions for equipping itself for a winter war. The generals were certain the fighting would be over long before the snow fell.

The Russians did fight, tenaciously if not skillfully. Clark says he wants to acknowledge the resilience, toughness and valor of the ordinary Russian, even if the book is mostly about what generals did. But he does not inquire into what made the Red Army man and woman fight, often to the death.

This remains a mystery wrapped in an enigma. After the fighting started, Stalin dropped the party program in his propaganda in favor of a Holy Russia theme, but that could not have influenced the fighting in the opening weeks: it was during that time that Russia beat Germany.

The common soldier had at best modest incentive to fight for the Bolshevik regime; he would not have remembered much about tsarism but no doubt he had heard about it. No on wanted to die for a renewal of tsarism.

Later in the war, it is obvious (from reading memoirs and contemporary letters and news reports though not from this book) that the Red Army soldier was motivated by revenge. Many said exactly that. They were ready to fight to the death because they had no families, no villages to return to.

Clark comes close to this motivation when he writes (from the German perspective) “no man coming fresh to the scene could stay sane without acquiring a protective veneer of brutalisation.” But this does not account for why the German soldier kept fighting when it was obvious the war was not winnable. (To anyone with a map, it was clear in May 1942, when the assault was renewed on a much reduced scale from June 1941, that Germany had not the strength to impose its will on Russia.)

Clark, who made his reputation with “The Donkeys” about the generals of the British Expeditionary Force in 1915, is ignored by the professional historians of the Russo-German war. It is hard to see why.

He specialized in describing the idiocy of generals — not hard to find if you look — and his conclusions are generally similar to those of the academic historians, only enunciated earlier. He is much harder on the German generals than the academics are but this seems more to his credit than against it. The academics seem to be bemused by the undoubted tactical skill of the Germans — far better than that of the Russians even at the end of the war — while forgetting that generalship involves much more than directing combat and, even worse, that the Germans had lost the eastern war almost as soon as they started it.