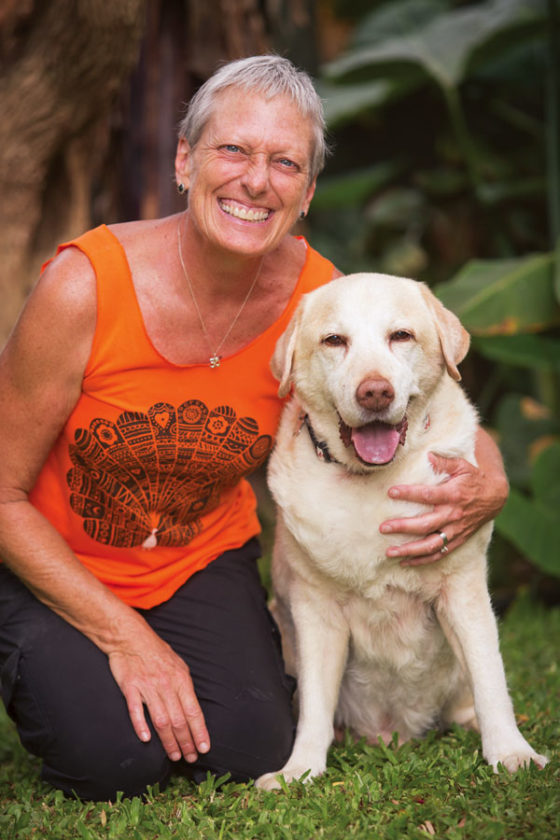 Melodie Ulman is changing lives, one tail wag at a time.

It’s 9 a.m. on a Monday morning and one of Hale Makua Health Services’ most beloved volunteers is ready to make his rounds — but only after he sniffs a few things first.

Dawson, a fox red Labrador, is a regular visitor to both of Hale Makua’s facilities, where dozens of residents greet him with open arms, big smiles and, occasionally, tears of joy. As he moves from room to room, Dawson, a trained therapy animal, doles out kisses, snuggles and an endless supply of unconditional love. Sometimes the residents get a double dose of affection: Dawson’s big brother, Jaya, a 13-year-old Labrador, often accompanies him on these twice-monthly visits.

“When they walk in the room, there’s a light that turns on and it warms everyone,” said Melodie Ulman, the dogs’ handler. “It’s absolutely amazing to watch.” Ulman runs Caring K9s of Maui, an all-volunteer organization that coordinates therapy-animal visits to locations islandwide.

“People are brought to this by their dogs,” she explained. “That’s how I got involved.”

It all began in 1999, when Ulman, then a resident of Lake Tahoe, rescued Shasta, a mastiff who had a knack for making people smile. So much, in fact, that several of Ulman’s friends suggested she enroll Shasta in a therapy dog program. “I didn’t know about therapy dogs at the time,” she said. “I had to do a little research.” It didn’t take much to persuade her to give it a try. The effects of animal-assisted therapy are nothing short of extraordinary: Studies show that the human-animal bond can lower blood pressure, boost cardiovascular health, increase oxytocin (the “love hormone”) and reduce stress, anxiety and depression. 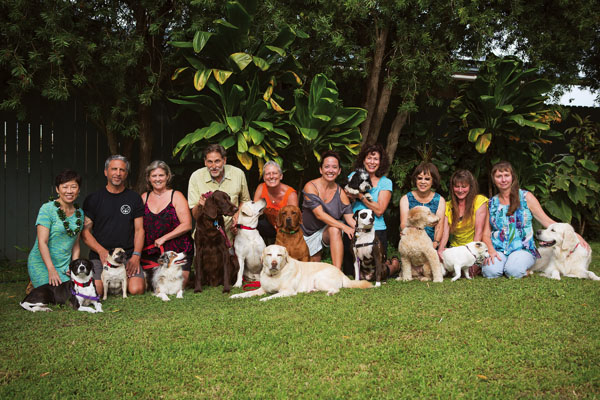 Melodie Ulman (fifth from left) and her fellow two- and four-legged volunteers bring comfort and healing to residents through Caring K9s of Maui.

A few months later, after undergoing training and a thorough evaluation, Shasta was ready to go to work. Ulman took her to several nursing homes in the area and witnessed the magic of animal therapy firsthand. “I saw that just a few minutes with a dog can make a big difference in someone’s life,” she said. “I knew right then and there I’d found my calling.”

So, when Ulman moved to Maui in 2012, she didn’t waste any time getting involved. “That’s how Caring K9s of Maui came to be,” she said. Today, Ulman, Dawson and Jaya visit up to 30 locations — including Hospice Maui, Islands Hospice, Roselani Place, Maui Adult Day Care Centers and individual clients –throughout the month. “We have a busy schedule,” Ulman said. “But it’s worth it. The dogs love it and the people we visit are so grateful. We always hear ‘thank you’ and ‘this made my week.’ “

Dawson and Jaya are also familiar faces at two Boys & Girls Clubs of Maui clubhouses. There, they participate in the Reading Education Assistance Dogs (R.E.A.D.) program, which improves kids’ literacy and communication skills by giving them an opportunity to read aloud to a registered therapy dog. “When the kids see us pull into the parking lot, they drop everything and run into the clubhouse to sign up to read to the dogs,” Ulman said. “It’s like peanut butter and jelly: dogs and kids are just meant to be together.”

With that in mind, Ulman, a former kindergarten teacher, often brings the dogs to meet preschool-age children. “It’s an opportunity to teach kids how to treat animals with kindness,” she explained. “We talk about what dogs like, what they don’t like and how to care for them.”

Before any visit, the dogs are bathed, groomed and dressed to impress in matching blue bandannas. It comes as no surprise that Dawson and Jaya are instant celebrities just about anywhere they go. “When a dog walks into the room, the ice is broken,” Ulman said. “Their hearts are pure and lovely . . . they have so much to offer.”

What began as a solo endeavor four years ago quickly evolved into a team effort: There are now 13 handlers on Caring K9s of Maui’s volunteer roster. “We have all types of volunteers and all types of dogs,” Ulman said. “It’s such a wonderful group.”

Caring K9s of Maui is always looking for additional two- and four-legged volunteers, Ulman said. “We hope to expand,” she said. “There’s always more for us to do and there are so many other places we want to go.”

Ulman, who is in the process of applying for 501(c)3 nonprofit status, is a licensed therapy animal instructor and evaluator through Pet Partners, a nonprofit organization that registers therapy dogs and other therapy animal pets. She oversees the training and evaluation of every Caring K9s of Maui dog and handler, a process that can take anywhere from a few weeks to three months. “It depends on the person and the dog,” she explained. Ulman is currently training the newest addition to her pack: a puppy named Kodi (short for “Kodiak Bear”).

For Ulman, Caring K9s of Maui is a dream come true. “When I was younger, I wanted to work with animals, but I didn’t think it was practical,” she said. “Now I get to work with these dogs that bring so much joy to so many people –and there’s nothing more rewarding than that.”

For more information about Caring K9s of Maui or to learn more about volunteer or donor opportunities, contact Ulman at caringk9smaui@gmail.com.

* Sarah Ruppenthal is a Maui-based writer and instructor at the University of Hawaii Maui College. Do you have an interesting neighbor? Tell us about them at missruppenthal@gmail.com. Neighbors and “The State of Aloha,” written by Ben Lowenthal, alternate Fridays.