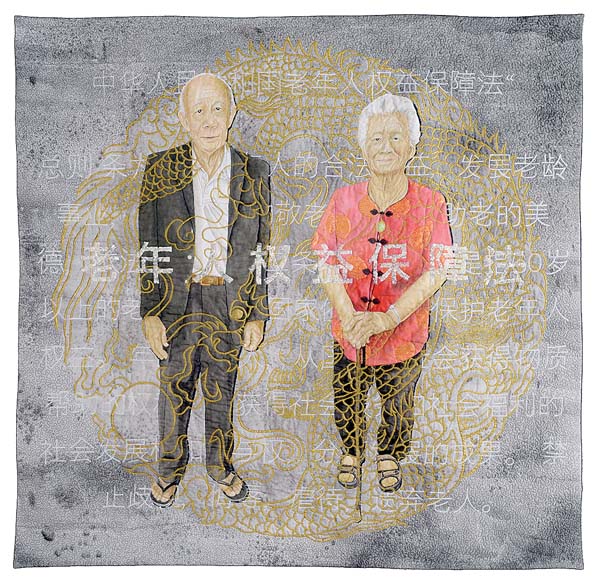 When Kathleen Kastles sat down to sew a jungle-themed quilt for her young grandson nearly two decades ago, she never expected it to inspire a new artistic passion. But as she stitched together the colorful monkeys, tigers and elephants, something clicked. “I loved the tactile nature of it,” she said.

At the time, quilt art was an unfamiliar medium for Kastles, who had already made her mark as a painter and art photographer. After designing and sewing a second quilt for her granddaughter, Kastles says she was hooked.

Today, the retired psychologist and award-winning artist has hundreds of handcrafted creations under her belt. And one of them will soon be on display for all to see at the International Quilt Museum in Lincoln, Neb.

Six years ago, Kastles read a newspaper article about China’s filial piety law that instantly set her right brain into motion. Filial piety (loosely defined as caring for one’s elderly parents) is a treasured virtue in China, and in 2012, the country passed a law mandating that adult children routinely visit their aging parents — or potentially face a fine or jail time.

“Born in 1941, my world history education in school was filled with the aftermath of World War II, and I became an onlooker to the cataclysmic events occurring in China under communism,” Kastles said. “I noted the grand scale of social engineering, from the traditional ancient Chinese veneration of elders to the cultural revolution, when even the oldest intellectual Chinese was forced to do arduous manual labor, followed by the one-child policy. And then the passage of the filial piety law. It was a compelling subject for a quilt.”

Capturing the essence of the law on fabric was a painstakingly precise process — and one that took a year to complete. Titled “Legislating Love,” the 48-inch-wide, 49-inch-high quilt features Maui residents Herman Chun and Irene Chung, both first-generation Chinese Americans. The pair happily agreed to pose for the piece. “I needed two older people of Chinese descent to portray the Chinese elders affected (by the law),” Kastles explained.

The appliqued figures of Chun and Chung overlay embroidered Chinese characters (the preamble to China’s filial piety law) and a circular gold dragon motif. “The figures are entirely superimposed over the text, whereas the dragon is only partially superimposed over the figures,” Kastles said. “This serves to link the visual elements, as well as to symbolically illustrate the fact that an ancient Confucian ideal — reverence for elders — is currently reaching into the present with this law.”

And, she took the symbolism a step further: “Filial Piety” (written in large Chinese characters) is superimposed over all of the quilt’s elements to denote the significant impact of the law.

To say “Legislating Love” had an auspicious debut would be an understatement. Apart from dazzling Chun and Chung, it was selected for the 2015 Quilt National (a juried biennial exhibition of contemporary quilt art in Athens, Ohio) and included in a two-year-long traveling exhibition of award-winning quilts.

Earlier this year, Kastles received an email from the International Quilt Museum expressing interest in acquiring “Legislating Love” as part of a permanent collection of prize-winning quilts. She is now preparing to ship the piece to Nebraska. There, it will not only be admired, but also studied. It will be accompanied by supplemental materials — including original sketches, photos, fabric swatches, journal entries and videotaped oral histories — so others can understand the creative process from start to finish.

Kastles is eager to see “Legislating Love” reach its final destination and she’s exceedingly proud of her creation. “It’s one of the most important pieces I’ve ever done,” she said.

To learn more about Kastles or to view her online portfolio, visit www.kathleenkastles.com.