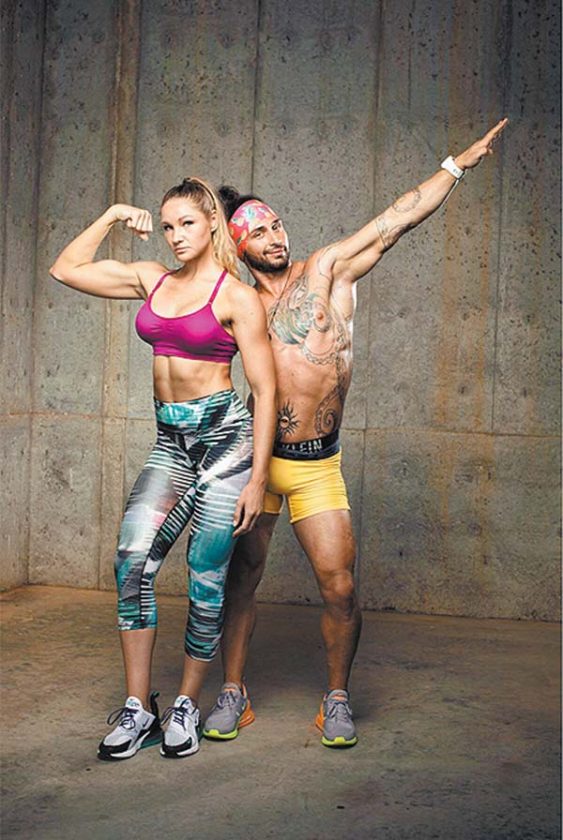 Launiupoko residents Jessika Stauffer and Robbie Marino are in it to win it. The private trainers, who are engaged, will compete for a chance to win $100,000 on Paramount Network’s new reality television series, “Battle of the Fittest Couples,” which premieres at 8 p.m. Tuesday on Spectrum Channels 559 and 1559. Photo courtesy Endomol Shine North America

The couple that works out together, stays together.

Just ask Launiupoko residents Jessika Stauffer and Robbie Marino, who say hitting the gym together seven days a week is the secret to their healthy relationship.

And it just might help them win a reality show competition, too.

The engaged private trainers will test their mettle as they compete against 11 other ultra-fit pairs on Paramount Network’s “Battle of the Fittest Couples,” which premieres at 8 p.m. Tuesday on Channels 559 and 1559 locally. The contestants will push the limits — physically, mentally and emotionally — for a chance to win $100,000.

It may be a fitness competition, but at its core, “Battle of the Fittest Couples” is about relational strength and teamwork — something Marino says gives him and Stauffer an advantage.

“We’re like Popeye and spinach,” he said. “We just go together.”

He says “Battle of the Fittest Couples” was an unexpected opportunity. Last year, Marino was on his way to meet a client when his cellphone rang. He answered and listened in bewilderment as a casting agent asked when he and Stauffer would be available for a virtual interview. Unbeknownst to him, a longtime client had surreptitiously submitted an application on the couple’s behalf. In spite of being caught off-guard, they agreed to the interview, and not long after, boarded a flight to the East Coast to make their television debut.

Marino and Stauffer can’t reveal what happened in the weeks that followed (you’ll have to watch the show and find out), but say it was an unforgettable experience. And somewhere along the way, they realized they felt at home in front of the camera. Since then, the couple has appeared on Vivica A. Fox’s “Face the Truth” and “Hawaii 5-0.” They hope to further expand their onscreen credits as they continue to help others reap the benefits of exercise.

Marino has worked as a private trainer for nearly two decades; he’s also a nutritionist and hormone specialist. Stauffer, too, wears several hats: She’s a private trainer, sports nutritionist, massage therapist and professional fitness model. Both say there’s no greater reward than seeing a client reach his or her fitness goals.

“We are passionate about helping people,” Marino said. So much, in fact, that he plans to launch a nonprofit organization that will provide more nutritional options for students in local schools.

For now, he and Stauffer are gearing up for the premiere of “Battle of the Fittest Couples.” If you have any misgivings about reality television, they say this show may very well change your perspective.

“It’s the most unique reality TV series built around fitness,” Marino said. “It’s a different kind of show . . . and there are a lot of surprises.”

To learn more about one-on-one fitness training, contact Stauffer and Marino at RMFitnessint@gmail.com.