Matt Daniells paddles in Silverback Hawaii oceanwear made from recycled water bottles that may have otherwise been sent to a landfill. Photo courtesy Matt Daniells

Every great idea has an origin story. This one starts with a gorilla.

Four years ago, Matt Daniells’ brother, Mark, made a woodblock print depicting a gorilla holding an outrigger paddle. When he saw his brother’s creation, Daniells decided it would be the perfect logo for a product. He didn’t have a specific product in mind at the time, though, so he shelved the idea.

A year later, Daniells was shopping at a local surf store when he spotted a pair of board shorts with a tag that read: “Made with Repreve.” Repreve is a performance fiber made entirely from recycled materials, including post-consumer plastic bottles and pre-consumer waste. Daniells was immediately intrigued.

“The use of recycled polyester over virgin, newly manufactured polyester results in a reduction of your carbon footprint by 78 percent,” he explained. He started hunting for a rash guard made with Repreve, but came up empty after an exhaustive search.

“That’s when the lightbulb went on,” he said. 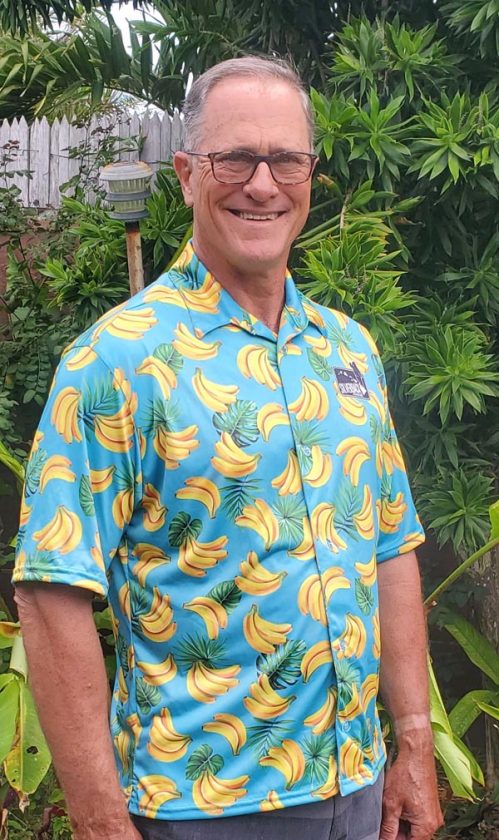 In late 2019, Daniells debuted Silverback Hawaii LLC, a homegrown company that makes men’s and women’s oceanwear from Repreve upcycled polyester fabric. The Silverback Hawaii line includes UV-protective rash guards, leggings and hoodies, all of which are certified, traceable and made in the U.S.; Daniells works with a Los Angeles-based manufacturer and both the Repreve fiber and fabric are made in North Carolina. And yes, his brother’s woodblock print inspired the company’s name, as well as its two logos: a paddle-holding gorilla and a surfing gorilla throwing a shaka.

When it comes to watersports apparel, Daniells knows what works best — and what doesn’t. The ocean has been his second home for as long as he can remember.

“I was born in Guam, lived in Palau as a small child and spent the remaining years on Maui always diving, fishing, paddling, swimming and windsurfing,” he said.

Daniells started windsurfing competitively in the 1980s and has won his share of medals and trophies over the years. In 2015, he decided to give paddling a try and instantly fell in love with the sport. He joined the Hawaiian Canoe Club that same year and has since racked up a number of medals, including a gold medal in the 2016 Molokai Hoe (a 41-mile race from Molokai to Oahu), followed by a third-place medal in 2017, and another gold in 2019.

Drawing on his own experience and using feedback from his fellow paddlers, Daniells designs each Silverback Hawaii product with five things in mind: style, comfort, durability, sun protection and sustainability. Any way you look at it, he said, “It’s a win-win.”

But Daniells says the biggest win is creating something that can help reduce plastic pollution. Every year in the United States, billions of plastic bottles are used and discarded, but only a small fraction are recycled. In 2017, the U.S. Environmental Protection Agency reported that Americans generated 35.4 million tons of plastic waste. Of that, 26.8 million tons were sent to the nation’s landfills. And according to the Ellen MacArthur Foundation, a staggering 8 million tons of plastic ends up in our oceans each year — equivalent to one garbage truck dumping its contents into the ocean every minute. That number is expected to double by 2030, and if it continues to go unchecked, plastic in the world’s oceans will outweigh all fish pound for pound by 2050.

“If you spend any time in the ocean you can see the substantial amounts of plastic waste on the beaches and in the water,” Daniells said. “Just in the last 10 to 20 years, I have seen a massive proliferation of ocean and shoreline pollution. It’s tragic and painful to see. I care about the ocean. I care about the world. I want my daughter and her children to inherit a better world.”

Turning plastic bottles into wearable products like rash guards and leggings may be a small step toward a plastic pollution solution, he said, “But it’s the right step in the right direction.”

Maui County has been able to provide support to our struggling residents, businesses and organizations during the ...

Whaaaaat? At the end of May, I learned the county was switching to an all vote by mail (VBM) system. Knowing ...

We continue to be #MauiStrong because we help one another

For the past several months, COVID-19 has challenged us, dominated our thoughts and unfairly changed life as we ...