Stepping up to the plate, making a positive impact through baseball 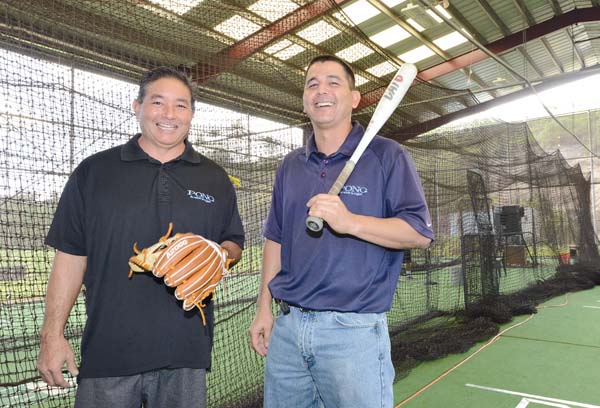 Dean Yamashita (left) and Craig Okita, former opponents on the diamonds of their youth, are coaches for the All Pono Organization. They teach more than baseball to their young players; they use the game to offer lessons about life. The Maui News MATTHEW THAYER photo

For Craig Okita and Dean Yamashita, “baseball is life” is more than just a catchy slogan — it’s a guiding principle.

To say that the two men are familiar with the game would be an understatement. Okita played shortstop for Baldwin High School, then took the field for University of Hawaii; Yamashita pitched for Maui High School and went on to play for California State University, Fullerton.

They may have played on rival teams at their alma maters, but Okita and Yamashita are far from adversaries. Today, as coaches for the All Pono Organization, Little League and Baldwin High School, the two men clearly make a good team — and in more ways than one.

It all started when Okita and Yamashita met up on a T-ball field nine years ago. They weren’t total strangers: Yamashita had coached Okita’s younger brother and both played on the same State AJA (Americans of Japanese Ancestry) team in 1995.

In 2007, the men signed up their then-5-year-old sons to play for the All Pono Organization, a nonprofit organization that emphasizes “pono” values through athletics and community service programs. All Pono started with two softball teams in 2005, and since then, it has grown to 13 softball teams, nine baseball teams and 10 soccer teams, all of which are headed by volunteer coaches like Okita and Yamashita.

At first, Okita and Yamashita intended to be “baseball dads.” Both men had plenty of coaching experience under their belts, but they just wanted to sit on the bleachers and cheer on their sons. However, as All Pono began to add more teams and players to its roster, they decided to pitch in.

“It just sort of happened,” Okita said. “I felt compelled to do it.”

In the years that followed, Okita and Yamashita coached their sons’ All Pono teams, alternating roles of head coach and assistant coach along the way.

“The plan was to coach our boys until they were freshmen in high school,” Okita said. “And then that would be it for us.”

But things didn’t go according to plan.

“No,” Okita laughed. “It definitely didn’t go the way we planned.”

Today, when they’re not coaching their All Pono team during the Little League or Pony League seasons, Okita and Yamashita are coaching an all-star team or taking a travel team to play baseball on the Mainland. And that’s just half of it: The men also help out with the annual Kurt Suzuki All Pono Baseball Clinic and coach the Baldwin High School junior varsity and varsity teams, too. In addition, Okita serves as All Pono’s baseball administrator, helps with Little League duties and was part of the effort to build the batting cage facility at Baldwin High School.

Okita and Yamashita, who both have full-time day jobs, spend up to 20 hours a week during the season (which runs from November through August) coaching 50 players ages 13 to 18 on five separate teams — six, if there’s an all-star team to coach.

“Synergistic” is the best word to describe Okita and Yamashita’s coaching style.

“Our goals are the same; we are always on the same page,” Okita said. “I don’t think I’d be doing this if it weren’t for Dean.”

Yamashita agrees. “We work well together,” he said. “I don’t think I’d be doing this if it weren’t for Craig.”

Okita and Yamashita aren’t just teaching their players how to hit a line drive or steal third base. They’re also teaching them the values of hard work, integrity and respect — both on and off the field.

“It’s our job to teach them how to be good baseball players, but also guide them in the right direction outside of baseball,” Okita explained. “We hold them to high standards and we expect a lot from them. . . . We expect them to be pono.”

The greatest reward, Yamashita says, is making a positive impact through baseball.

“We get to share our love of the game and the camaraderie that comes from playing on a team,” he said. “When we’re out there working with the kids, there’s no doubt in my mind that we’re making a difference.”