Havens gives back while growing game 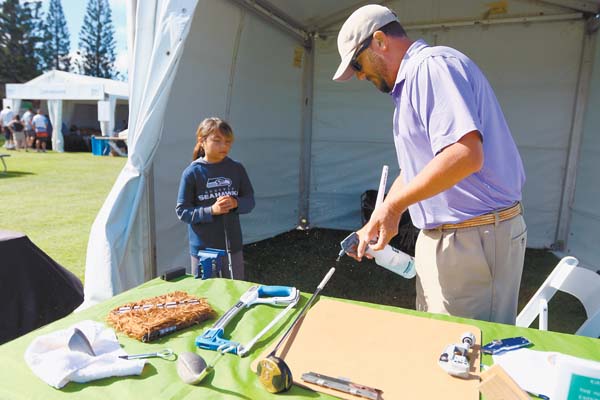 Kihei golf pro David Havens, founder of Spare for Change, sprays soapy water on a recycled golf club before slipping on a new grip for Shasta Amaral, 10, of Wailuku on Friday during the Sentry Tournament of Champions at the Kapalua Plantation Course. The Maui News / CHRIS SUGIDONO photo

Curious golf fans and their children got a chance for some hands-on testing of clubs, grips and other equipment during this year’s Sentry Tournament of Champions.

Kihei golf professional David Havens spent Thursday to Sunday at the Kapalua Plantation Course customizing and recycling old donated clubs for new and young golfers through his nonprofit, Spare for Change. Based at Maui Nui Golf Course in Kihei, Havens’ venture teaches players of all experience levels and aims to help offset the high cost of playing golf.

“I’m an old Yankee workshop (person) so I do it by hand with a hacksaw and then I use a pipe cutter,” he said of the work done at his booth-turned-workshop at the fan village. “I can’t do electrics out here because it’s noisy, and I’m an old-school guy anyways.”

Founded in 2011, Spare for Change has given out over 13,000 clubs to new and young players. It began in a small office in West Maui, from which Havens handed out a few hundred clubs per year — the annual number now is more than 2,000.

This is the first time his nonprofit was part of Maui’s PGA Tour event, and Havens also plans to head to the Sony Open on Oahu for the third straight year.

“For the kids that love the game and they can’t afford it, if I’m not busy I’ll build them four or five clubs because if they can play golf I want them to have enough of a selection to function,” he said.

Havens moved to the island in 2004 after years of playing professional golf around the world. He started as an assistant pro at Kapalua, then worked for the PGA Tour and eventually landed at Maui Nui.

“For all these guys you see out here, there’s thousands of me out there,” he said gesturing toward the champions-only field. “I went through (Maui) to do the Australian Tour one year and got my brains beaten out over there playing and realized it was time to get a job for real.”

While working his regular jobs, Havens slowly developed his nonprofit and held fundraisers to buy gear. As word spread throughout the golf community, people from across the nation began sending him their clubs.

He is now up to 10,000 clubs — many are in his garage and the rest in a storage container.

“And based on me being on the Golf Channel this morning, I’ve got people writing to me ready to clean out their garage and send their garage to me, which scares me a bit,” Havens said Friday.

Repurposing golf clubs for children during the tournament begins with youngsters selecting a club and grip. Havens saws down the club to fit the players’ height and then places tape on the shaft. Soap and water are sprayed onto the tape to slip the grip on as part of a final maneuver that takes 10 to 15 seconds before the grip settles.

“It’s part of the experience because they see the whole process and they buy in,” he said. “They understand what’s going on and it’s just an awesome thing.”

Havens also makes a point to give clubs to the parents and grandparents so they can play with their children as they take up the sport.

“When you first start there’s a real disconnect,” he said. “Are you really going to go to a golf store and spend a thousand bucks? Do you even know what you need or know all the answers?

“Me giving you clubs, you’re going to know they fit you and they work. Once you get going and learn the game, then you can buy to your personality.”

Havens said he is in the process of building a $100,000 facility for his nonprofit and golf academy, which will be powered by solar energy. About 90 percent of the structure has been built and Havens is aiming for a March 1 blessing ceremony.

He hopes the new facility brings in more golfers for lessons as well as the opportunity to provide more children with golf clubs.

“Everything we have is due to golf,” he said. “Where I live, my wife and kids, my education. Golf gave me all of that so this is my way of giving back in a very simple manner.”