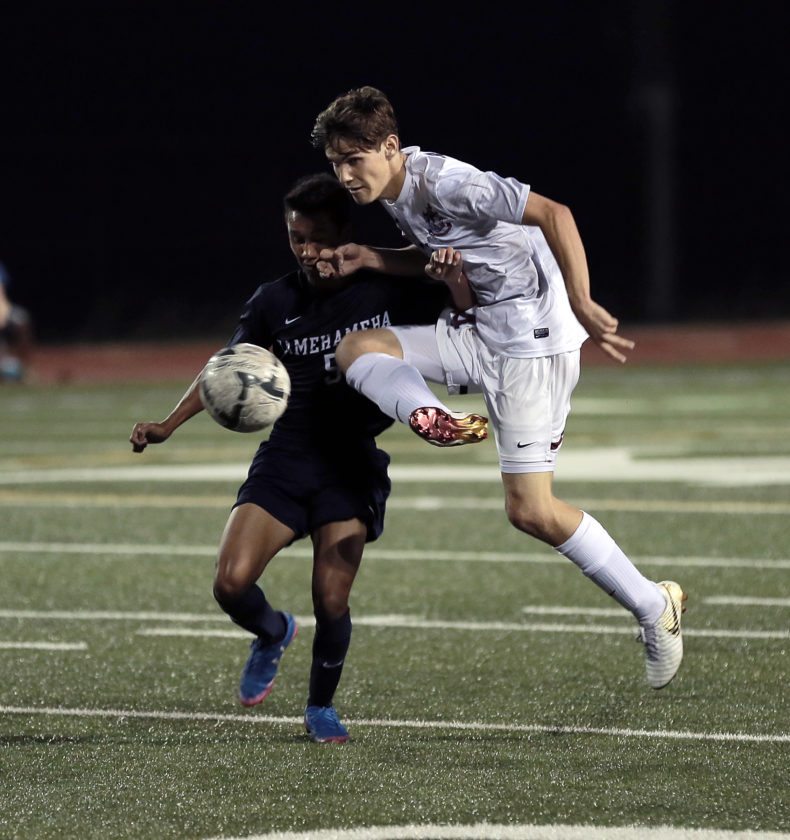 Baldwin’s Hayden Hawes kicks the ball forward next to Kamehameha Maui’s Gideon Aiwohi in the first half of the Bears’ 2-0 victory over the Warriors on Wednesday night at Kanaiaupuni Stadium. • The Maui News / CHRIS SUGIDONO photo

PUKALANI — Jacob Hogin knew how important the first goal would be on Wednesday night at Kanaiaupuni Stadium.

The Baldwin High School senior midfielder delivered the eventual game-winner in the 29th minute of the Bears’ 2-0 win over Kamehameha Maui.

Hogin’s goal came after a scramble in front of the net.

“There was a scramble and then it went through the guys’ legs and then it was kind of hard to line up, but I still got it in,” Hogin said. “It felt good because we hadn’t won up here in a long time.” 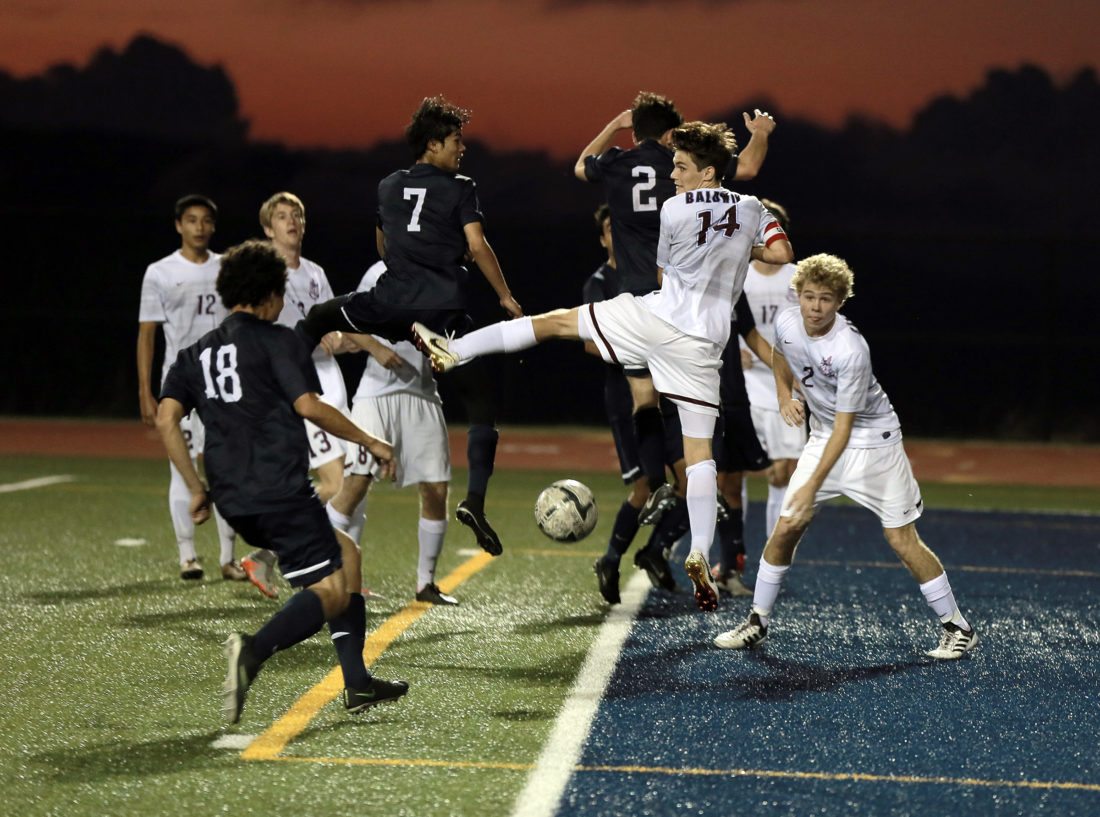 A Kamehameha Maui corner kick sails over players to the Warriors’ Samuel Akoi (18) in the first half Wednesday. • The Maui News / CHRIS SUGIDONO photo

The win secured a state tournament spot for the Bears and moved them to the top of the Maui Interscholastic League boys soccer standings at 7-1-1 — with 22 points, the Bears are one point in front of King Kekaulike (6-0-3).

Baldwin can clinch its second straight MIL championship with a win at Seabury Hall (1-8-0) in its regular-season finale on Saturday. Kamehameha Maui (5-4-0), which won the 2015 and 2016 MIL titles, was eliminated from state consideration.

Baldwin lost a crucial game to King Kekaulike 3-1 on Jan. 20, but Na Alii lost control of its own destiny a few days later with a 0-0 tie with Lahainaluna.

“We kind of knew what was going on,” Baldwin coach Kaniela Palazzotto said. “Once we saw the tie (between Lahainaluna and King Kekaulike), we knew we had a chance. … Again, we’re the champs. You give us a second chance, we’re not looking back.

“Yeah, we messed that game up against King K, but the best thing about this side is we’ve been here before and we know when we take a loss we know how to bounce back.”

The Bears scored the clincher in the 65th minute when Angelo Deloso-Flocco ran on to a stellar pass down the sideline by Garbiel Andrion. The ball seemed to hug the sideline for 60 yards before Deloso-Flocco found it and beat Kamehameha Maui goalkeeper Gabriel Arcas, who had several tough saves on the night.

Kamehameha Maui’s Teva Pimentel had the best early chance, sending the ball over the crossbar in the fifth minute. Deloso-Flocco’s diving header in the 15th minute was stoned by Arcas.

Andrion sent a rocket shot off the crossbar in 29th minute, leading to the scramble in front of the Kamehameha net that Hogin cashed in.

“We always expect them to come out hard, they always do,” Nakasone said of the Bears. “We’re going to be back harder and even better, guaranteed.”

The Bears played the final 33 minutes down a player after receiving a red card in the 57th minute. They survived as Kamehameha Maui pushed its players up the field looking for the equalizer.

“Look, I’ve been blessed by the man up above to be in such a great, quality program,” Palazzotto said. “It took some work to build, but to keep it going for now 15 years. … We know we don’t have things sewn up mathematically yet and my boys are smart enough to understand that.”