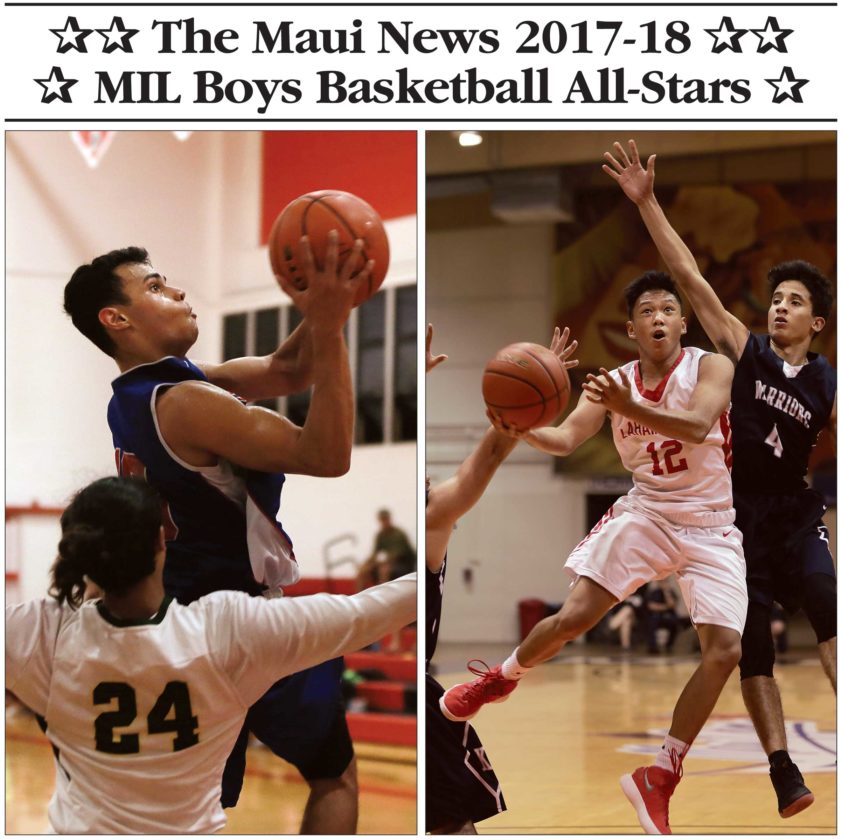 They are also the choices of the league’s coaches as The Maui News 2017-18 MIL Players of the Year in boys basketball.

Turno won the Division I award for the first time, while Payne claimed his third straight D-II nod.

“At first I didn’t believe it, but I’m just happy,” said Turno, who is listed on the roster at 5-foot-8, but admitted he is not quite that tall. “I didn’t think I would win because my height was too small. I’m 5-6.”

Turno grew up with head coach Jason Justus in the Lahainaluna program — they share four years of emotional ups and downs, and four league titles. 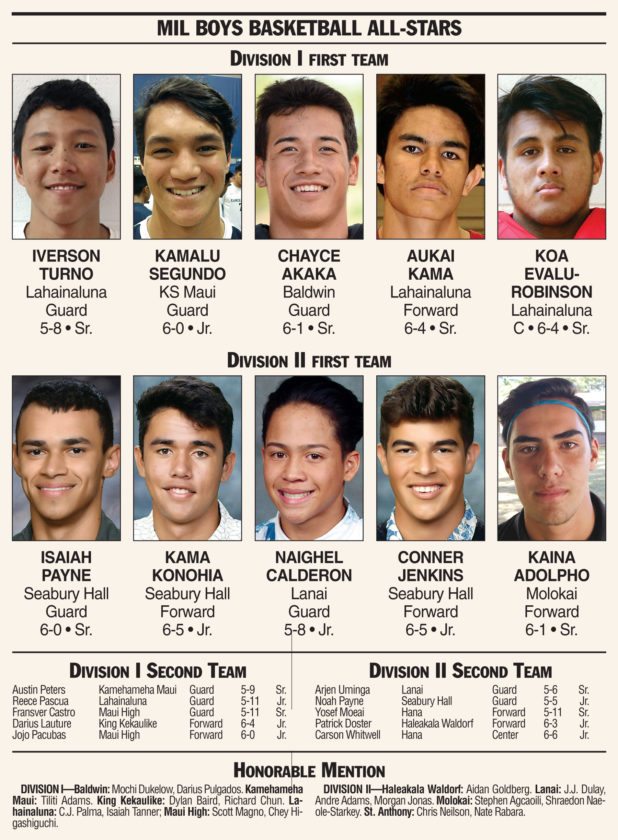 “As a point guard for this team, I’m the second option, so I had to look to pass to my teammates to make the team better,” Turno said.

Payne started as a sophomore at point guard for a Seabury Hall team that advanced to the D-II state final before losing to University Lab School two years ago. The Spartans lost in the semifinals last year and fell in the quarterfinals this season after winning their ninth straight MIL crown.

Payne is joined on the D-II first team by teammates Kama Konohia and Conner Jenkins, along with Lanai’s Naighel Calderon and Molokai’s Kaina Adolpho.

Payne says he is deciding among about five colleges for either basketball or track, where he is a sprinter.

“It’s really cool — I know there’s been a lot of good players in the league and to be able to get it three times in a row is just incredible,” Payne said of the POY award. “I work very hard and I know that everybody else does as well, but to be awarded that three times means that something is paying off.”

Seabury Hall coach Scott Prather, the choice of his peers as MIL D-II Coach of the Year, was a standout point guard at Maui High and the University of Hawaii-Hilo.

“We’re going to miss him dearly next year,” Prather said of Payne. “He was special on the court and off the court, special to say the least.”

It took some time for Turno to develop the right attitude — he couldn’t recall the number of times he was told by coaches to leave practices in his first two seasons under Justus, a former NCAA Division I player himself.

In his junior season, Turno kept the number of practice dismissals to three, and in his senior season it happened just once.

“Coach Jason, he always pushes us to get better,” Turno said. “You can’t come to practice with attitude.”

Justus, voted MIL D-I coach of the year, but he deflected credit to assistants Kalei Houpo and Rachael Kane. He will always have a special place in his heart for Turno, who is considering joining last season’s MIL D-I Player of the Year Jeremi Santos at Cypress Junior College in California to continue his basketball career.

“He’s been probably one of the best success stories that I’ve seen come out of Lahaina from a maturity standpoint,” Justus said. “(Turno) has become an unbelievable young man from where he started. He’s been thrown out of the gym on several occasions, he’s been suspended, he’s missed out on a lot of good opportunities, but he’s become such a good young player, it’s been fun to watch.”

The Lunas finished third and fifth in the last two state tournaments, going a combined 4-2 in Honolulu. Their chance at a state title this year dissolved in a 50-40 quarterfinal loss to eventual state champion Punahou.

“We just work hard — we practice all year long to get to this position,” Turno said. “After that buzzer hit against Punahou, that’s when I knew. I just started, like, crying because I knew that was my last Lahainaluna basketball game.”

“We’ve been playing together since we were 6th-, 7th-graders, so to win the MIL with these guys this year was just unbelievable,” Turno said of the time with his team. “Just crazy.”