Bears close with win over Sabers 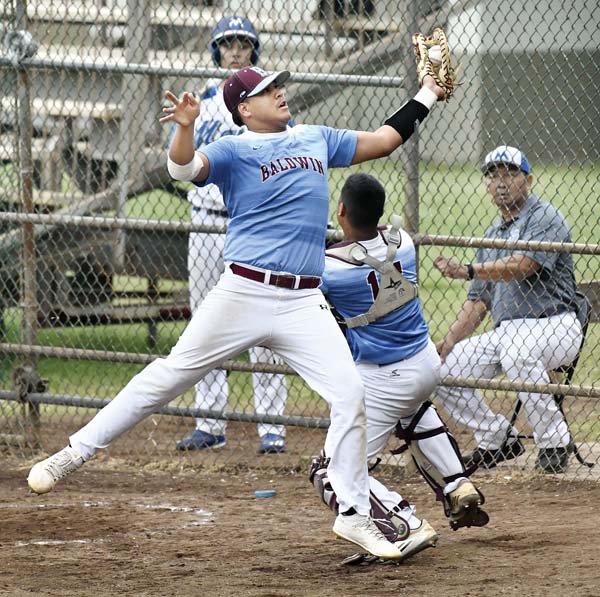 WAILUKU — The Baldwin High School baseball team surrendered three runs for the first time in Maui Interscholastic League play this year, but the Bears survived for a 4-3 victory over Maui High in the final game of the Division I regular season Thursday evening at Maehara Stadium.

The game was a make-up of a contest that was rained out three times after being originally scheduled for April 7.

“We were trying to get everybody in the game tonight and we were able to do that,” Baldwin coach Shane Dudoit said after his team wrapped up an 11-1 run through the MIL by outscoring opponents 87-10. “Some kids come to practice every day and give us all they got. I wanted to get them in the game. It’s the seniors’ last (regular) season game, so we started all the seniors tonight. It’s all good.”

The Bears broke on top in the fourth when Nainoa Keahi walked with one out and scored two batters later on a bloop single to right field by Isaiah Kusunoki.

The Bears pulled off a double steal in the fifth, pushing the lead to 2-0 when Chayce Akaka scampered home after Reyn Okita drew a throw to second on a steal. Keahi smacked a double on one bounce to the wall in left field to score Okita and make it 3-0.

Baldwin pulled off another double steal to up the lead to 4-0 in the top of the sixth when Kusunoki scored after he reached on an infield single.

The Sabers (5-7) cut the deficit in the bottom half of the inning on Kamahao Ching’s two-out, three-run double to deep left field. Pinch-hitter Donnie Archer followed with a single to left to put runners on the corners, but Akaka — the third of four Baldwin pitchers — got out of the jam with a comebacker to the mound by Christian Lee.

The Bears will open the MIL tournament next week in search of their ninth straight MIL pennant — they play in a semifinal Thursday against the winner of Wednesday’s game between Lahainaluna and King Kekaulike. Maui High faces Kamehameha Maui in a semifinal Friday.

The tournament championship game is Saturday.

Maui High was in the same third-seeded spot for the MIL tournament last season, when the Sabers survived and went on to win the state title.

“This is a good sign,” Fukagawa said. “Proud of our kids — we had a game plan going into this week for actually the next coming weeks. We’re looking forward to the tournament. We knew no matter win or lose tonight we were locked into that third spot. I preach to the kids: ‘We play hard. We go to win all the time.’ That’s what we preach to these kids, to go play hard at all times.”